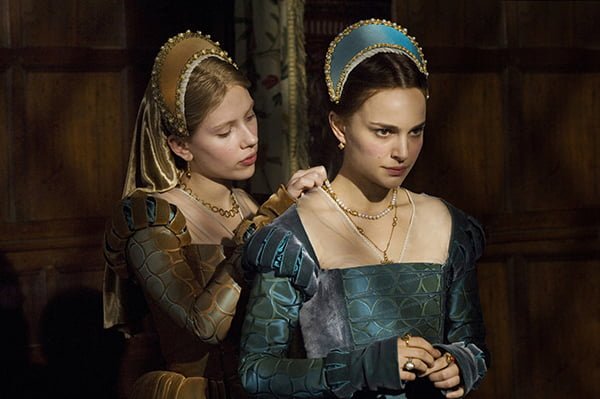 Scarlett Johansson and Natalie Portman in The Other Boleyn Girl

World travel is at the touch of your play button this week, as long as you don’t mind a few green screens and computer effects. Both Jumper and The Bucket List set companions across the globe in search of fun and eye-opening experience, but not without their prices. On the other hand, The Other Boleyn Girl whisks us away to more honest locations in a historical drama about the famous Boleyn sisters as they try to win over the King of England.

Jumper
Proving in the Star Wars prequel trilogy that he couldn’t act his way out of a soggy napkin, if someone had thrown one over his head, Hayden Christiansen somehow maintains a likeable screen presence that has given him another role he can snooze his way through.

Mimicking the morally ambiguous Anakin from the prequels, Christiansen plays David, a young man who one day realizes he might be a loser at school, but he’s at least a loser who can teleport anywhere he likes. Jumping around the world at his leisure after that, and escaping from his unhealthy childhood, he “borrows” from banks, leaving little IOUs, and generally living like a rich, pompous twit.

Enter Samuel L. Jackson as agent Roland, the head of a group that apparently hunts “jumpers” like David. He is on to our friend, who doesn’t realize there are other people like him, until he meets Griffin, played by Jamie Bell, an even more selfish and morally empty individual who has been avoiding Roland and his team for years.

Jumper benefits from epic locations (that appear mostly quite real), decent special effects, and a certain amount of rapport between its stars. The film isn’t particularly clever, or spellbinding, but it is fun, and about as close to a decent popcorn movie as you’ll find this week. My big complaint is merely with the lack of imagination, and the way Jackson coasts through the entire film on a weak, recycled version of his usual bad-guy routine.

Special features on the single-disc edition are limited to a commentary with the director and producers, plus three featurettes that look a little bit into how the film was made, the most interesting of these being the sets and special effects. If you’re really looking for features, the two-disc edition has a lot more to offer, including a digital copy of the film, but that said, I can’t imagine spending actual cash dollars for the extended version of this empty-headed popcorn adventure.

The Other Boleyn Girl
People love a good story, even if it means that the truth has to, say, take a back seat to more interesting storytelling techniques. The Other Boleyn Girl certainly sticks closer to historical facts and events than a lot of films, but there is no question the film, which is based on the popular Philippa Gregory novel of the same name, plays with some of the details.

Natalie Portman and Scarlett Johansson star as the infamous sisters, Anne and Mary Boleyn, bent on winning their family power and money by bedding the King of England, played here by Eric Bana. The film starts out innocently enough, with Anne told that she can help her family by becoming the King’s mistress, but one incident sets things awry and Mary finds herself called away to court, with her entire family in tow. Anne, unwilling to let Mary have all the fun, makes her own plans to win the King’s favour, and will seemingly stop at nothing to be his Queen.

Where The Other Boleyn Girl wins you over is in the drama of these two sisters, torn apart and essentially fighting for the same man. English history had lots of these sordid stories, and you will hardly find a soap opera with half as much angst and emotion as The Other Boleyn Girl. My praises aside, the film still suffers from a slow plot, and mostly unremarkable performances, and for all of its historical accuracy, it can’t hold a flickering candle to a film like Elizabeth.

The Bucket List
Some movies are made by their special effects, others by their clever dialogue or story, but in the case of The Bucket List, there is the hope that pairing Jack Nicholson and Morgan Freeman together will somehow redeem an otherwise lame tall tale.

Nicholson stars as the extremely wealthy Edward, forced into the same hospital room as Carter, played by Morgan Freeman. The two men, who are diagnosed with terminal cancer, become chummy despite Edward’s foul moods and decide that they can’t waste what remaining time they have on this planet and have to see the world. With Edward’s money, and both of them contributing must-experience things to their “bucket list” (things to see and do before they kick the bucket), the two set out, even though Carter’s wife doesn’t want him to leave.

With its slow plot, incredibly downbeat story, and fluffy elements, the film is not either actor’s best work and should likely be ignored by all but the most patient of film buffs. Even having the chance to see these two stars together pales in comparison to the drudgery of watching this glued-together odd-couple buddy film, that suggests cancer can be ignored for a while if you really want to accomplish something. The final nail in the film’s coffin was watching as these two actors paraded around a world of superimposed backgrounds, removing the last vestige of reality that could possibly have redeemed the film.

Lawrence of Arabia
The great Peter O’Toole stars in this classic tale of an Englishman, sent to Cairo as an emissary to an Arab prince, but led into an epic battle that would challenge his heroism, resolve, and humanity. As nearly anyone will tell you, one of the best films ever made.

The Grand
Las Vegas plays host to a string of oddball characters, played by oddball actors, in this mockumentary about a winner-take-all poker tournament worth $10 million. Woody Harrelson, Chris Parnell, and Dennis Farina star in Zak Penn’s latest farce, following his previous mockumentary style comedies, Best In Show and A Mighty Wind.

The List
A Christian message gets the thriller treatment in The List, a story of a young lawyer drawn into a greedy pact that secures money for his family, but includes the risk of evil forces and power-hungry madmen.

Television and other titles arriving on DVD this week…

This is a big week for series and other special titles, with six shows dropping new seasons on DVD, plus one noteworthy music release. My top pick is definitely the complete collection of the comedy Soap, including all four seasons which originally broadcast from 1977 to 1981. Other releases include volume one of the second season of The Fugitive, season three of Da Vinci’s Inquest, the eighth season of Home Improvement, season six of 7th Heaven, the fourth season of Hawaii Five-O, and for the music fans, Genesis drops their concert DVD, When In Rome: Live 2007.