DVD Tuesday: ‘Sword in the Stone’, ‘Be Kind Rewind’ 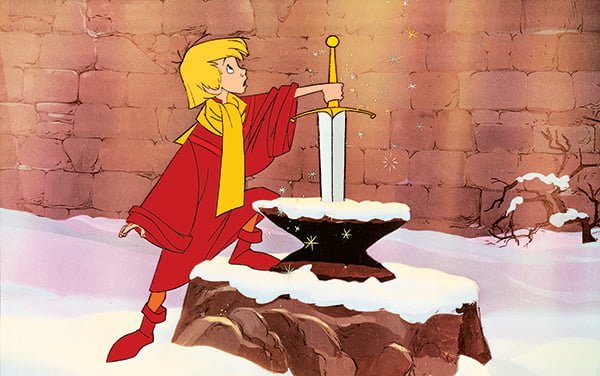 Disney’s The Sword in the Stone

The Sword in the Stone: 45th Anniversary Special Edition
Time has a funny effect on films. As a kid, back when The Sword in the Stone was at least 20 years old, I looked forward to the chance to see this movie any time that it was on the Wonderful World of Disney. What more could a kid like me ask for – it had everything – a wizard, people turning into animals, and the story was all about a socially awkward kid.

After years apart from this childhood favorite, my perspective has changed a lot, but this is still an endearing, fun little film that will appeal to kids of all ages.

Following the King Arthur myth, the story is a morality tale of sorts about a very young Arthur, nicknamed Wart, and his first adventures with the weird and wonderful wizard Merlin. While Arthur tries to earn his keep as a squire to a young, incompetent knight, Merlin attempts to teach the young would-be king how to use his brain, transforming him into different creatures and letting him learn little lessons along the way.

The Sword in the Stone has more than a few great scenes, including the kitchen-cleaning number, and there are also some great songs throughout. Hands down though, the best scene is with the introduction of Mad Madame Mim, the witch who tries to destroy little Arthur, and challenges Merlin to a duel.

Next to other Disney films of the era, The Sword in the Stone is not quite as memorable, but it is still a great movie from the years when Disney was the be-all and end-all for creating spectacular, time-honoured animated classics. There is a rich, dark tone to the film that gives young Arthur a place to shine, and it is impossible to watch this film and not miss hand-drawn animated movies.

While this is a Special Edition, there are few extras included in the package. There is a game for the wee ones, songs from the film with lyrics, and the making of the music with the Sherman Brothers. However, my favorite feature was the bonus movie shorts, including the Goofy film Knight For A Day, and Mickey Mouse in The Brave Little Tailor. Two classic Disney shorts that feel right at home with this lively adventure.

Be Kind Rewind
Michel Gondry has created some of the most engaging, and strange music videos of the last decade, so it seems only natural that his filmmaking career should be just as off the wall. A fine example of his dreamy, surreal style can be seen in the 2004 film Eternal Sunshine of the Spotless Mind, which starred Jim Carrey as a man who had wiped his memory of the woman he loved.

In Be Kind Rewind, Mos Def and Jack Black are two friends, forced to remake films for a video store when Black’s character erases the store’s entire collection after he becomes magnetized. Danny Glover plays the forlorn, friendly store owner who finds himself with a winning business plan, until Hollywood comes knocking about the video store’s obvious copyright infringement issue.

Set in the beat-up corner of a neighbourhood that could be in almost any city, the film is naturally friendly thanks to the great cast, and Gondry’s charm at turning characters and situations into perfect tales of people you wish you could get to know. The film is honestly hilarious at times, but the biggest problem is the weak plot which begins to drag in more than a few scenes.

Watching Def and Black recreate movies like Ghostbusters is the highlight of the film, as is the heartfelt ending. I also got a kick out of the film’s apparent message that Hollywood is losing fans because most films lack heart and don’t know how to engage viewers. Be Kind Rewind is however a bit hard to sit through at times as it gets bogged down in Black’s antics, and piles on way too much sweet and frothy feel-good moments.

Chaos Theory
Over the cute music, obvious comic setups, and Ryan Reynolds doing his usual thing, it’s hard to see Chaos Theory as more than an attempt to be a great dramedy that just doesn’t know how to pull everything together.

Reynolds stars as Frank, an author and speaker who teaches people how to use to do lists, index cards, and timetables to eliminate time wasters from their lives. The problem with that should be obvious; Frank always plays it safe and never gets a chance to enjoy life, at least not until his wife mistakenly sabotages his day, putting him 10 minutes off course. What follows is one wrong incident after another until Frank can’t keep his cool, and decides to leap off the deep end for once in his life.

Co-star Stuart Townsend, who plays Frank’s friend Buddy, is unfortunately one of the best things about this film, which tries too hard and never lines anything up in a likeable way. Emily Mortimer as Frank’s wife, and Reynolds are a poor couple, and neither is really given quite enough to work with. In addition, poor editing, and easily forecasted plot points make the film hard to watch.

Fool’s Gold
Kate Hudson and Matthew McConaughey go on an adventure looking for treasure in Fool’s Gold, a weak action comedy that is predictable, boring, and about as memorable as getting your teeth cleaned – in other words, for all the wrong reasons. The film has the questionable marker of being one of the few films in 2008 to get a “perfect” 0% from the top critics at RottenTomatoes.com.

The Nude Bomb
Can’t wait for the new Get Smart movie coming to theatres? Then take a look back at the only other Maxwell Smart movie, The Nude Bomb which stars Don Adams as the one and only Agent 86. The silly film has Smart trying to stop an evil KAOS villain from dropping a bomb that will destroy all of the world’s clothing.

4 Months 3 Weeks and 2 Days
The 2007 Palme d’Or winning film from Cristian Mungiu has a young woman, in the middle of 1980’s-era Bucharest, trying to have an abortion in a country where the dictatorship has outlawed the act. While the film did not last long in theatres, perhaps due to the weighty subject matter, it has received rave reviews from the likes of Time, Wall Street Journal, and the Chicago Sun-Times‘ Roger Ebert.

Californication debuts its first season on DVD this week, and stars David Duchovny as the sex-obsessed writer Hank Moody. After penning a hit book, which was made into a bad film, Hank hasn’t written in over five years, and as he deals with his ever complex relationship with his ex-girlfriend Karen, played by Natascha McElhone, and his daughter Becca, played by Madeleine Martin, he is also seemingly jumping into bed with a new woman every five minutes.

Duchovny makes this entire show a lot of fun, thanks to his natural charm, and easy wit, but Californication has more than a few clever plot twists, as well and a very strong supporting cast. While I think it’s one of the most entertaining shows I have seen in a while, it is still a very adult show that tries to push as many buttons as it can, and has raised the ire of a number of conservative protest groups, so don’t go saying I didn’t warn you.

The only feature to be found on the 12-episode set is a commentary by Duchovny with series creator Tom Kapinos and executive producer Stephen Hopkins. The second season of the series is tentatively set to return to Showtime this fall.

Plus, pick up the ninth season of ER, and Jericho, the complete series.