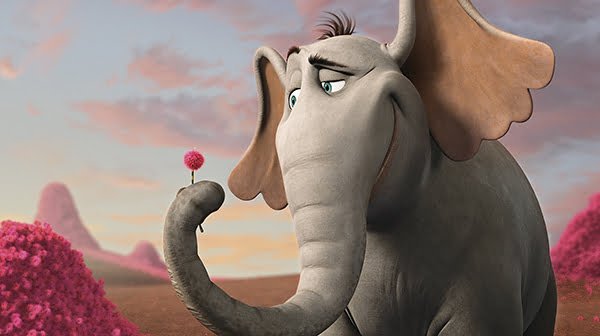 Horton Hears a Who!

As March break wraps up for many families across the country there is one great reason to take your family to the movies this weekend, and that is Dr. Seuss’s triumphant Horton Hears a Who! For years fans have been waiting for a good adaptation of Seuss’ stories, but they won’t have to wait any longer. Other fresh arrivals lean to the definite violent end of things, with the apocalyptic Doomsday, the teen fighter flick Never Back Down, and terror-filled Funny Games.

Horton Hears a Who!
The masterful and whimsical storyteller Dr. Seuss created some of the most memorable children’s stories ever written, and today his influence is still felt around the world by young readers and adults alike. With the animated film Horton Hears a Who!, starring Jim Carrey and Steve Carell, fans may finally get a feature-length film that captures some of Seuss’ genius – especially in comparison to failed adaptations like The Cat In The Hat.

The story is as wild, and fantastic as you could hope for, with all of the requisite brains and charm. Horton (Carrey) the elephant lives in the jungle of Nool and one day discovers that there is a little creature living on a speck of dust that is on top of a flower. Actually, not only is there a creature on the speck, but a whole city, the town of Who-ville to be exact, and the little creature is the Mayor of the town (voiced by Carell). Horton decides that he has to protect the speck, and despite being ridiculed by his friends in the jungle, tries to keep it from the clutches of Vlad and his rather bad friends.

Like all of Seuss’ work, Horton Hears a Who! covers a number of topics that you might call inspirational, especially to young minds, and carries a positive message that won’t make you feel like you’re being hit over the head. It is also one of those great movies that you can watch with your kids and not feel like either of you are being spoken down to. That, in essence, is what defined Dr. Seuss and it’s refreshing to see it finally being done right on screen.

Critics from near and far are singing the praises of the film, with Colin Covert of the Minneapolis Star Tribune commenting, “Earlier big-screen adaptations have smothered the good doctor’s unpretentious whimsy under layers of production bloat. Horton feels as blithe and confident of its unpretentious virtues as its long-nosed hero.”

Doomsday
Set in Scotland, Doomsday is an over-the-top action extravaganza about a massive virus outbreak that threatens to kill off people around the world if it isn’t contained. In the present day, the authorities decide to seal off Scotland to save the rest of the population, and they leave it to its own devices for 25 years. But when the virus re-emerges in another major city, a group is sent into Scotland to discover what has happened to the people, and to see if the survivors have somehow found a cure. The violent society within those walls are of course, not quite ready to make nice, and will seemingly stop at nothing to get rid of the interlopers.

It is perhaps telling that there seem to be no early reviews of Doomsday, which suggests that the studio decided not to screen the film for the media. And that is never a good sign. In fact, that’s usually the clear signal that the studio feels confident the media won’t have anything positive to say about the film. Being a testosterone-heavy film, it’s also just as likely that the studio knows that the action-friendly audiences headed out to see Doomsday don’t care at all what the media has to say about their explosions, car chases, and battle scenes.

There is at least some comfort in knowing that the director is Neil Marshall, who also directed the very well-received horror film The Descent. Likewise, star Rhona Mitra as Eden Sinclair won’t hurt the film’s appeal in any way. Beyond that, there is no telling how good Doomsday will be, but it should satisfy your hunger for a big action movie quite easily.

Never Back Down is a martial arts action film about a young guy who moves to a new town. As he tries to fit in, he gets a reputation as a brawler, and ends up getting drawn in to a sport known as Mixed Marshall Arts. The idea is that MMA is not street fighting, it’s a sport, but the funny thing is that the film’s trailers all want you to get the idea just how much it looks like street fighting. Reviews are decidedly negative, and there is very little chance this film is even remotely watchable.

In Funny Games, Naomi Watts and Tim Roth are harassed by two insane young men who wander into their home and hold them captive, while basically tormenting them. The film is painted by brutal violence and sexuality, but with a purpose of actually forcing the viewer to examine how we view those ideas. The critics are fairly torn on whether this exercise makes for a good film, but there is no question that director Michael Haneke knows how to make a powerful movie that will push all your buttons.