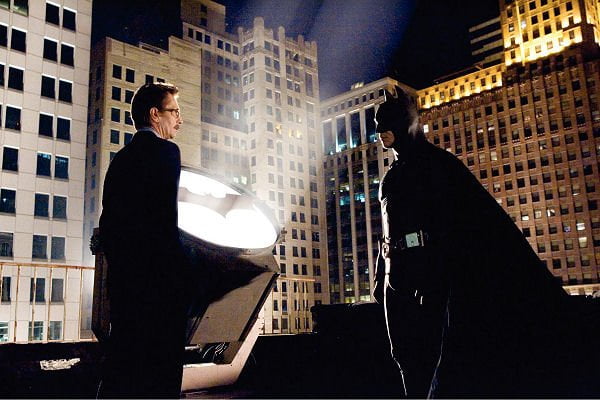 Batman Begins (On Blu-Ray)
He hardly seems to be showing his age, but earlier this year Batman celebrated his 69th birthday. As Warner Bros. ramps up the publicity for the latest film in the franchise, The Dark Knight, the studio is also debuting Christopher Nolan’s reboot, Batman Begins, on Blu-Ray and the result is stunning.

While I’m a big fan of the 1989 Batman, there is really no comparison between that film and Nolan’s Batman Begins. Nolan’s vision is a rich tale, that looks at a stage in billionaire Bruce Wayne’s life that we have never seen before, following the death of his parent’s, but starting out before he has taken up the mask and cape. Christian Bale stars as Bruce, who leaves Gotham City after his parent’s killer is gunned down, moments before he had planned to kill the man. Wayne is locked away in an Asian prison when Henri Ducard (Liam Neeson) finds him and presses him to be a greater man.

Wayne eventually returns to Gotham City and takes up the mantle of the city’s crime fighter, taking on the city’s crime-laden streets, and the mob bosses behind it all. At the same time he must confront his past, while handling what is expected of him as a businessman and a crime fighter.

Nolan brings together an incredible cast, including Katie Holmes as Bruce’s childhood friend Rachel, Morgan Freeman as the gadget guy Lucius Fox, plus Michael Caine as Alfred the butler, and Cillian Murphy as Dr. Crane. Not to mention incredible effects, and a larger-than-life epic quality in every frame of the film.

Fans can certainly find interesting versions of this film on DVD already, and while the Blu-Ray release merely re-packages all of the features we’ve seen before, the bonus is the addition of the IMAX prologue for the theatrical release of The Dark Knight. Batman is definitely nowhere in sight, but the opening sequence offers a fantastic look into what fans can expect from the new film, including Heath Ledger’s debut as the Joker. Other features include an in-film experience, which looks at how the film was created, and a dozen featurettes that look at everything from script development to special effects.

The Ruins
From the mind of author Scott Smith comes the latest horror movie about a bunch of young American travelers who are murdered off by the latest horrific unusual thing: plants.

Five tourists travel to the Yucatan Peninsula and find a Mayan temple that doesn’t seem to be on any maps. Once they arrive, the locals won’t allow the group to leave, and they find that all of the vines covering the temple are hungry for humans.

Amazingly, the concept is not nearly as lame as it should be, and The Ruins has some definite scares. The script is really nothing special though, and despite decent performances by Jena Malone, Laura Ramsey, and Shawn Ashmore, the entire story is pretty dull and poorly told.

Tracey Fragments
Before Ellen Page was a pregnant teenager in Juno, she starred in Bruce McDonald’s dark, broken story about a young girl in Winnipeg, looking for her brother Sonny. With music by Broken Social Scene, and editing that makes nearly every scene an artistic rendering of the film’s emotion, the Tracey Fragments is certainly a strange film on some levels, but it is also incredibly creative.

While McDonald’s film is edgy, sometimes heartbreaking, and compelling, it fails to capture a true narrative that can carry the film. The result is a story that could probably have been summed up in a 30-minute short. I would still recommend Tracey Fragments, especially to contemporary film fanatics, but I was slightly disappointed in the results.

Charlie Bartlett
In an age of treating teenage troubles with medication comes wannabe superstar Charlie Bartlett. Anton Yelchin stars as the fearless equivalent of a new age Ferris Bueller, who tries to earn the love of his school by acting as the in-house psychiatrist, complete with prescriptions for what ails his new friends.

Charlie’s ambition gets him in trouble though when his new school career blows up in his face, and he has to decide what to do with his fame, not to mention his relationship with, of all people, the Principal’s daughter.

Charlie Bartlett is a surprisingly sweet film that samples the fringe of actual teen issues with wit and charm. Stars Hope Davis, as Charlie’s mother, Kat Dennings as Charlie’s girlfriend offer surprising depth in their performances, while Tyler Hilton commendably fills the role of Murphey, Charlie’s thug/friend. Robert Downey, Jr’s role as the school’s moping Principal is not what I expected, but he does add some depth to this sometimes flighty film.

Towards Darkness
This grim-as-it-gets action thriller by writer and director Antonio Negret paints a vivid, if somewhat overblown vision of Columbia’s dangerous reality. According to the film, a person is kidnapped every three hours in the country. That shocking reality sets the stage as we follow Jose, played by Roberto Urbina, as he is kidnapped and flashbacks flesh out how events were set in motion.

Negret, who has first-hand knowledge of Colmbia’s problem, weaves a complex tale, but the story is just too fractured to be truly potent. Technically, Towards Darkness is an incredibly well-made film, and I enjoyed a lot of the performances, including by America Ferrera. The story just never feels like it attains the depth and breadth spelled out by the weighty, dreadful reality.

Raw Spice: The Unofficial Story of the Making of the Spice Girls
This 78-minute long documentary from 1994 recounts the formation and early days of the Spice Girls, looking at how they first made a go of it, before they were even signed. The footage is really raw, poor quality, and apparently was edited in 1994 as well, but I have no doubt in my mind that there are still loads of Spice fans who can’t get enough of these British pop-tarts.

The Adventures of Ozzie and Harriet: Best of Ricky and Dave
Back in the 1950s, the Nelson family grew up together on TV in one of the longest-running sitcoms, lasting a total of 14 years on the air and launching the career of Ricky Nelson as a singing sensation. This special boxed set includes some of the best episodes featuring Ricky and Dave, with bonuses including trivia, two radio episodes, and a number of performances by Ricky. Compared to modern sitcoms, the show is a goofy, but sweet treat that is really refreshing on a lot of levels.

Plus, check out season six of Monk starring Tony Shalhoub; the fifth season of I Dream of Jeannie with Larry Hagman and Barbara Eden; and the complete collection of the Anne of Green Gables films, starring Megan Follows as the one and only, Anne.