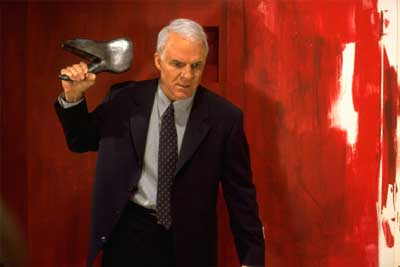 If thinking of the dentist makes your teeth hurt then seeing Novocaine is bound to be a double wammy of pain. Not only is there at least one scene bound to leave you hurting, but despite the incredible cast and the title, there’s very little pain relief except for Steve Martin’s occasional comic relief as the lead character, Frank Sangster. He even seems a bit flat compared to his usual abilities. But, Martin gets little help from the rest of the cast and Laura Dern as Jean Noble is anything but spectacular.

On the other hand, Helena Bonham Carter as Susan Ivy and Elias Koteas as Harlan are fairly good, but Carter doesn’t even deliver the performance she gave in this summer’s Planet of The Apes. Still, to a large part the movie hinges on Carter’s abilities and even when I felt a little weary of the film, Carter still had a way of pulling me back in. She was so convincing and delivered such a balanced character that was lovable, evil, and even innocent at times, I even found her weakest moments interesting.

Still worse than the acting is the script and action. Lots of strange and unusual things happen and at points it doesn’t even feel like you should even care, but still the movie goes on. Yet, there is lots to love about this film. It does things that a lot of other movies wouldn’t dare to try and wraps it all in a dark, gritty sheen that’s as much a farce as it is a romp through light action and even a bit of strange romance. It’s a great mix of things, but at times it’s also too much to take and although there is a lead-up to the ending, it does feel a little tacked on.

The movie is basically about a guy who gets messed up with the wrong people. Frank is a straight-laced dentist who ends up getting involved with murder, drugs and even a little love and lust. Beyond that, trying to explain the movie only complicates things and reveals a bit too much, but that is really all you need to know.

The comic bits are really the best part of the movie. Included in this is a fantastic cameo by Kevin Bacon as an actor trying to research an upcoming role as a cop in a big Hollywood movie. Other parts, like Frank’s escape from the police (on multiple occasions) and a scene involving Susan’s bedroom are fantastic and hilarious. It was hard not to laugh and it was great to see Martin in his element here.

Near the end, the darkness gets much thicker. It’s almost like the movie tries to let you know that the near-finale is going to be dark, but it doesn’t set it up well enough. Then, when the ending flips around again, it feels like too many twists and turns… just like they were trying to turn the characters around and didn’t have any good reason to shift things around.

It’s not a bad film and it has a certain art-house kind of feel to it, but just when it should go farther, it stops short and other scenes that need to be more relaxed have way too much going on in them and feel too forced. Novocaine does lots of things, but compared to a real mind-screw like Memento or Mulholland Drive, Novocaine is light fare. I liked it a lot, but if anything, the audience could use a little drugs before they start watching this strangely unexciting film.