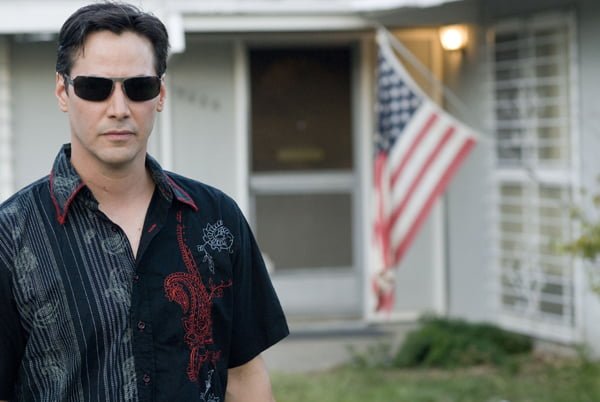 Street Kings
Los Angeles’ gets another grim, bloody makeover in director David Ayer’s cop drama about a vice cop, played by Keanu Reeves, and his tendency to practice his own form of vigilante-like justice.

Reeves is Tom Ludlow, a veteran cop who takes out any bad guys who get in his way, even if they’re unarmed and on the toilet. With the protection of his boss, played by Forest Whitaker, Tom gets away with murder, if you’ll pardon the pun, until his former partner is killed under suspicious circumstances. That’s when Internal Affairs investigator Captain Biggs, played by House star Hugh Laurie, takes notice of the vice squad while Tom looks for his ex-partner’s killers.

With its seedy story and endlessly tainted characters, Street Kings is dark, and dreary at times, but thrilling in a very character-driven storyline. Tom is a classic anti-hero, kicking butt and taking names, even as his conscience gets the better of him for each dastardly act.

The biggest problem I had with the film is simply that Reeves invests his usual levels of charm and nihilism into the part, but he never truly sells the whole rogue cop idea. He comes across as kind of a weak shade of bad, which is convincing enough when he’s shooting people, but he never gives Tom the kind of killer attitude the script demands.

Meanwhile, the story paints Tom in a conflicted light that never seems to gel. He seems like a total pansy, roughed up by thugs at the start of the film, drinking mini airplane-sized bottles of liquor, but at the same time he walks into a room and shoots up the place like he actually means it. The idea of making him complex is important, but each element seems contradictory rather than explanatory.

I would still recommend Street Kings to anyone who enjoys Reeves’ films, or seedy cop dramas, but the film requires patience and an extremely liberal imagination.

On the one hand I had to give the film credit for casting. Frances McDormand plays frumpy governess Guinevere Pettigrew, who can’t seem to hold down a job until she takes in with the whimsical starlet Delysia Lafosse, played to a T by Amy Adams. Delysia dubs Miss Pettigrew her “social secretary,” which in fact means that she is responsible for handling Delysia’s three competing suitors.

The film is however almost too bubbly for words, although it is extremely cute and sweet all at the same time. Despite a slow start, the movie is witty enough that it almost doesn’t matter though, and I also have to keep coming back to the fact that it’s filled with great performances.

Frances McDormand is the film’s jewel, but Amy Adams and her cavalcade of men are certainly lots of fun.

Included on the DVD are a hand full of extras, with deleted scenes, a making of featurette, and an interesting documentary about the film’s long journey to Hollywood.

The Babysitters
This button-pushing dark comedy leaps into uncomfortable territory with a concept that is almost amazingly risqué.

Katherine Waterston stars as Shirley, a high school brainiac who starts her own business that involves prostituting her friends out to local dads. John Leguizamo plays the father next door who inadvertently starts the entire business, fooling around with Shirley one night when a deep conversation turns dirty, but things quickly get out of control from there.

While the idea still gives me the creeps, the script and the cast are both a surprise. Writer and director David Ross takes advantage of the courser elements of the story, but infuses Shirley and her accompanying friends with roles that are far more than just eye candy.

Most people just won’t be able to get past the film’s premise, but The Babysitters is not a bad movie by any means. I was also very impressed that the DVD includes digital copies of the film, something mostly only found currently on bigger releases.

Don’t expect much from the film’s features, but if you want to get a better idea about why the film was made, check out the making of documentary which explores the film’s morality to a deeper extent. The commentary with Ross and Waterston provides a few glimmers as well, but is a little on the dull side overall.

Prom Night
Nearly-classic 80s slasher film Prom Night returns, forgoing the revenge theme for more of a horrible-tragedy sort of feeling with Brittany Snow as high-school senior Donna Keppel. She just wants to forget about the past, but someone won’t let her, killing off her classmates as prom night wears on.

The serial killer drama Dexter debuts its second season this week, plus season four of medical drama House, the first season of Gossip Girl, season nine of Married With Children, and the complete first season of film-turned-TV series Terminator: The Sarah Connor Chronicles.