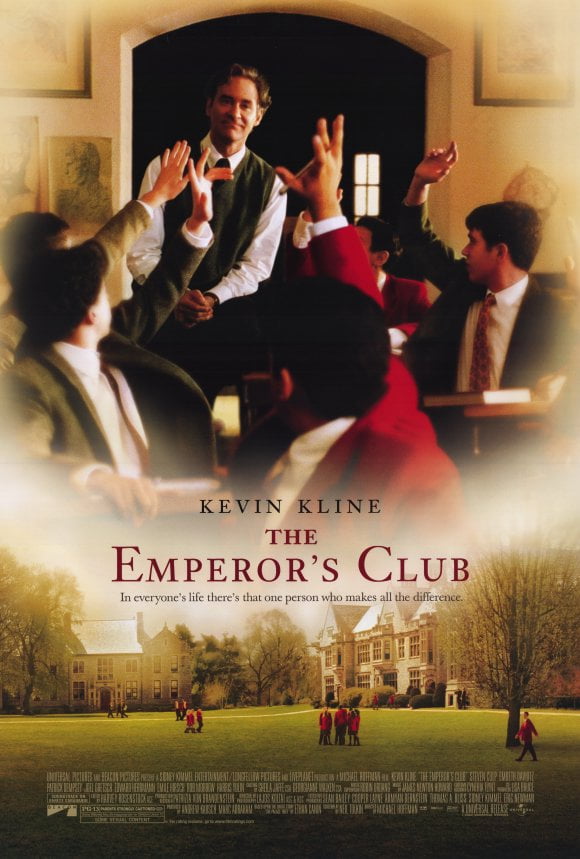 Kevin Kline has been wowing me for years with his work in a multitude of diverse film, like the romantic comedy, French Kiss, or more serious roles like the character George Monroe in Life as a House. Now, in The Emperor’s Club he seems to be borrowing a page from Robin Williams with a film that almost screams, “I want to be like Dead Poets Society“. The difference is, this is a film about morality and honesty, where Dead Poets was about being an individual.

Kline however is no John Keating. He’s not quite so far out in left field, but he is still one of those teachers who stands out beyond the regular crowd of bland and uninteresting people who take on the role of the educator. He stars as William Hundert, a morally upstanding history teacher who deals with the distant past, as opposed to recent history. When the film begins, we start off in present day as he is about to sit in on an event in his honor, but we quickly jump back into his first year as a teacher at an all boys school. There, after a short introduction that firmly entrenches us in the fabric of Hundert’s being, we see the obvious catalyst of the story – the arrival of the difficult new student, Sedgewick Bell (played by Emile Hirsch), who also happens to be the son of a local senator.

The introduction of Sedgewick, which is an obvious catalyst and a bit of a cliched opening crisis, is still powerful enough to draw you deeper into the story. It’s also the perfect place to really see Kline doing what he does best – react. Here we see the start of how Kline’s character deals with change and problems, and in almost every case, we also get some of the best lines of the entire script. One of the best of these also just happens to be very early on when Hundert proves that Sedgewick isn’t very bright and really hasn’t been trying while the rest of the class is dead-on in their studies.

At times, the marvel of this film is Kline’s ability to make your heart bleed. Between his character’s care and concern for his students, which feels real, and his issues with Elizabeth (played by Embeth Davidtz), the lady he can’t seem to ever be with, Kline captures this character in every pore and breathes the magic back out at us.

One small failing in the film though is the preoccupation with Hundert’s class. While I think the focus neatly makes the audience consider everything from Hundert’s point of view, I don’t think the film is totally adept at making that point of view complete. It feels well thought-out, but it also feels like something is missing from what we’re seeing. Where Dead Poets Society provided a view on the character’s lives and experiences, The Emperor’s Club is much more restrained and gives a much narrower vision that just doesn’t feel complete. Looking into the student’s other classes or into more of their external exploits would have been a nice way of solving this problem.

Still, Emperor’s Club is sad, touching, and a grandiose film with a story that sucks you in and makes you care about every event and person. The exceptional performances by the entire cast is part of the reason I think the film even succeeds as much as it does though because in many ways, the script doesn’t quite delve deep enough. In particular, I think the film fails to draw the film together properly in the final 15 minutes, which could have been much more fulfilling.

I’m still very impressed by the full effect of the film, it’s honest message, and the powerful performance that Kline offers up. Seeing Kline do all that he can with this part and creating a passion in Hundert’s eyes, and hearing him spout so much wisdom on the history of Rome and its ideals is enough to make me hope that Kline gets the respect he deserves after a performance like this.