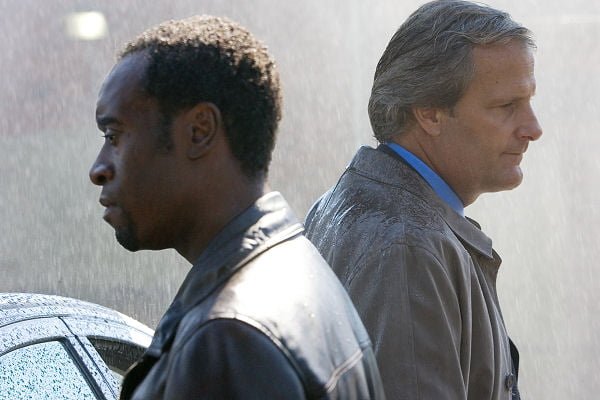 Traitor
Actor Don Cheadle and writer/director Jeffrey Nachmanoff offer this week’s one and only ray of sunshine with the super spy thriller Traitor.

Cheadle stars as U.S. Special Operations officer Samir Horn, a man who emerges at every turn when something bad has just happened. With no other leads on a series of worldwide crimes, FBI agent Roy Clayton, played by Guy Pearce, tries to track Horn down and discover the truth about what is going on. Jeff Daniels co-stars as a CIA contractor who has a number of connections to the unfolding events.

While there are a fair share of critics who disparaged the film for being flat, and as Entertainment Weekly critic Lisa Schwarzbaum put it, opportunistic, Traitor is still getting far better reviews than anything else this week.

Lou Lumenick at the New York Post called Traitor “a solid, intelligent international thriller showcasing the underrated Don Cheadle in an intriguing and morally ambiguous role,” which was also “the best end-of-August movie” he had seen in a long time.

Babylon A.D.
Vin Diesel cashes in on his tough guy attitude with another throw-away action movie that will likely arrive on DVD before you can say “bad movie.” Don’t get me wrong, I’m a huge Vin Diesel fan, but I’ll admit that he’s been in some pretty bad movies, and Babylon A.D. just happens to be the latest in a long list.

Set in a the not-too-distant future, Babylon A.D. has Diesel playing Toorop, a mercenary who is charged with bringing a woman named Aurora (Mélanie Thierry) to New York City. But, of course, she is not all that she appears and has special abilities that may give the future of mankind some hope after surviving an epic global war.

While the premise sounds at least somewhat intriguing, the trailer was the first thing that suggested this was going to be a bomb of a film, made all too clear when Diesel flatly says that he learns a lot the day he dies.

Given that the studio was seemingly too ashamed to screen the film for media, we have to turn our eyes to the British media for a proper review of the film, and there is nothing but bad news. The Daily Mail, and Sun Online both gave the film terrible reviews, with the Sun calling Babylon A.D. “a Blade Runner/Fifth Element wannabe which doesn’t have the budget to match its ambitions.”

Disaster Movie
The term “laughing all the way to the bank” comes to mind when I see that Jason Friedberg and Aaron Seltzer have another spoof movie coming to theatres this week. There are relatively few people with such a knack for producing such gawd awful movies, who routinely rake in so much money with such precision. Look no further than Meet the Spartans, Epic Movie, or the Scary Movie franchise for proof of that, all films that took in nearly double their budgets at the box office alone.

In the latest film the duo take aim at, well, disaster movies – making fun of any character or star with the most obvious of jokes and barbs.

If you liked any of their other films, perhaps you’ll like this one too, but I will quite happily say that you couldn’t make me watch this obviously awful film. Maybe you can’t judge a book by it’s cover, but I can most certainly judge the latest Friedberg/Seltzer film without any fear that I might be mistaken.

College
And in the ‘R’ rated College, a trio of high school seniors head off to college to learn about frats, girls, and partying. The film stars Drake Bell as Kevin Brewer as he and his friends try to prove themselves and maybe make out with a few girls.

Need I say any more? Think yet another Animal House-type movie knockoff with a lot more nudity and toilet humour.