The Amazing Spider-Man 2 is a perfect example of why movie ratings are sometimes useless concepts when applied to the real world where films are rarely easy to summarize with one little number.

Is it a good film or not? That depends on a lot of things, including how much you enjoyed the original Spider-Man films.

Back again in the tight red and blue outfit is Andrew Garfield as Peter Parker, the child of a scientist who apparently discovered a way to combine spider and human DNA, which caused Peter to gain his wonderful super powers when he was bitten by a mutant arachnid from one of OsCorp’s numerous experiments.

This time around, Peter is finally hit with the urge to find out what happened to his parents, and why they disappeared in the first place, but that question ties into his former high-school friend Harry Osborn’s quest as well.

Harry, played by Dane DeHaan, has inherited OsCorp from his sinister, seemingly unhinged father, and at the same time he has discovered that he has also inherited his father’s faulty DNA, and the only cure might be in Spider-Man’s blood. 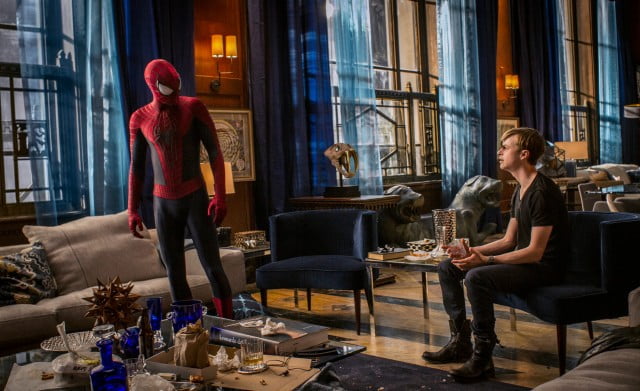 For Harry, it seems all too clear that Spider-Man is a product of OsCorp and their defunct spider research program, and because of experimentations that his father attempted, Harry is also certain that the hero’s mutated blood can cure him.

Meanwhile, inside OsCorp, a genius loser by the name of Max Dillon, played here by Jamie Foxx, falls into a vat of genetically engineered electric eels. Rising up from his own apparent death, he discovers that he’s can control electricity, and when he makes a few mistakes in Times Square, he ends up duking it out with his former hero, Spider-Man.

For Peter, all of this is happening as he is also trying to figure out what to do about his girlfriend, Gwen Stacy, played again by Emma Stone. He loves her, but after the death of her father at the end of the last film, he feels like the only way to protect her is to walk away, to keep her safe from the villains who could come after them both.

Directed by Marc Webb once again, The Amazing Spider-Man 2 has great intentions for the superhero, but it is still a flawed film all the same, even among its many triumphs, including killer special effects, fight scenes, and a rampant sense of humour that even has Peter whistling his own theme song as he goes along.

The biggest problem is simply that the film is all over the place, and feels uneven, and random. When Peter discovers a secret lab that his father used, he only seems to use it for one clue about his past, and then we don’t see it again. Moments like this ramp up the film’s running time to the point where it just feels bloated, not deep.

Likewise, the character development is awkward at best, with both Max, who becomes Electro, and Harry, who turns into a villain too, jumping to strange conclusions about why they hate Spider-Man. It’s impossible to follow their stories and understand why they feel like they do, and mental health is unfortunately a cheap scapegoat for many of their motivations, rather than any real, meaningful motive.

On the flip side, the performances are fantastic, all the way from Garfield and Stone, to Foxx, DeHann, and Sally Field, an almost unrecognizable Paul Giamatti, and Colm Feore too. Webb knows how to direct his cast, which makes the performances really fantastic. Garfield has an easy charm about him, and the chemistry with Stone is wonderful. Likewise, Foxx is perfectly unhinged, goofy, and malevolently badass, just as DeHann makes Harry seem like a psychopath with nothing to lose.

In terms of the script’s failures, we’ve seen these kind of writing issues before from Alex Kurtzman and Roberto Orci, in their previous films Cowboys & Aliens, and even Star Trek Into Darkness (co-screenwriter Jeff Pinkner is also listed as a writer for the film, but I can’t say what effect he may have had on the script). This time, the result just feels even more jumbled thanks to the fact that we’re essentially dealing with two villains at once (three if you count one other appearance near the end).

While the first film was a little flawed, I think it was a fantastic reboot for the Spider-Man franchise, and I would even praise screenwriters James Vanderbilt, Alvin Sargent and Steve Kloves for succeeding where this film’s trio of writers have somewhat failed.

Even some of the quirky moments of this new film take away from the film’s own successes, as when Electro somehow takes on god-like powers and can change himself into current and teleport himself around through electrical lines. Why he has the abilities of Doctor Manhattan, I’ll never know, but the power is made all the sillier when he disappears through a power outlet, and closes the little cover on it behind him. I’m not even kidding.

As a long-time Spider-Man fan (I have a Spider-Man film camera from when I was 5-years-old) I can forgive a lot of the film’s problems, because it does follow the web-slinger’s style, but you can’t really fit all of Spider-Man’s quirks in the same film without making it seem erratic, rather than clever.

I also have a hard time with any elements that feel like they are being re-used from the original Spider-Man films, and this time out there are many. Some of those elements are hard to avoid, but it does make me feel like this film isn’t trying hard enough to be its own story.

All of this brings me back to the rating, which has been difficult to figure out.

Weighing out the good and the bad ended up being the only way I could rate The Amazing Spider-Man 2, and even then I think I’m being overly kind. The film will no doubt please many more forgiving audiences, and it’s bound to rake in oodles of cash at the box office, but if I had to pick a film, I would still rather watch Alfred Molina in Spider-Man 2 versus the goofy villains in this reboot.