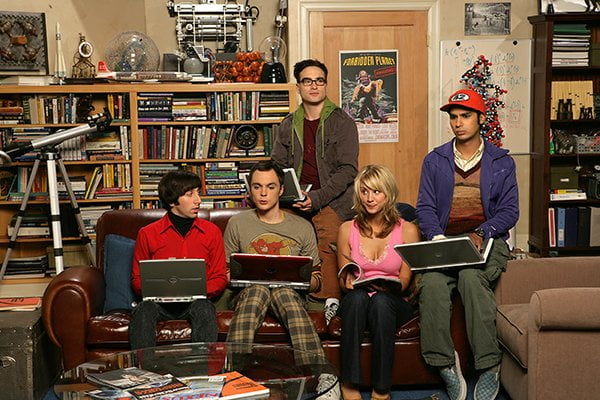 The cast of ‘The Big Bang Theory’

This week’s collection of new DVD arrivals left me scratching my head at first, until I stumbled on the geeky television comedy The Big Bang Theory and the dramatic goodness of Elia Kazan‘s film noir, Boomerang. Also out this week is Transformers on Blu-Ray, the office comedic drama The Promotion, and a plethora of new television seasons landing ahead of the fall’s new block of shows.

The Big Bang Theory: The Complete First Season
Television writer and producer Chuck Lorre is a bonafide hit maker. After being involved with the likes of Roseanne, Dharma & Greg, and Two and a Half Men, Lorre has been continually working with some of the biggest television comedies since 1990.

The Big Bang Theory follows a similar style that fans of Lorre’s other shows may be familiar with, but with a decidedly geek focus.

Starring in the comedy are Johnny Galecki as Leonard and Jim Parsons as Sheldon, two awkward, certified geniuses who make friends with the new pretty girl who moves in next door. Kaley Cuoco, who you may recall from 8 Simple Rules, stars as their neighbour, Penny, who immediately catches Leonard’s eye – despite that he doesn’t really know how to talk to her.

While not as clever or well-acted as Two and a Half Men, The Big Bang Theory is quirky and fun with a lot of laughs packed into the season’s early and later episodes. The most memorable being “The Nerdvana Annihilation” where the four geeky friends buy the original time machine, which proves to be both difficult to move and a geeky thorn in Penny’s side.

Included on the DVD is a feature, “Quantum Mechanics of The Big Bang Theory,” which talks to the cast and creators about why it’s sometimes cool to be geek.

Boomerang
Elia Kazan’s 1947 noir film Boomerang arrives on DVD this week among a series of titles released as part of the Fox Film Noir series.

Dana Andrews stars as District Attorney Henry Harvey, who dives into a messy case involving a revered community minister. After two weeks of no leads or suspects, the community becomes outraged, and one man gets wrongly singled out as the killer, and Henry is left to solve the case.

Based on a story that originally ran in Reader’s Digest, the film is not the best film noir of the era, but Kazan uses a documentary-style format to make the story slightly more realistic while still plumbing the criminal depths of the story.

Shia LaBeouf stars as Sam Witwicky, a proud used car owner who discovers that his hot new ride is actually a giant robot in disguise, who is actually trying to protect Sam from danger. The danger happens to be a group of evil robots who are prowling the planet looking for the essence that can create new robots.

The Promotion
The Promotion has the unlikeliest of pairings this week, with Sean William Scott and John C. Reilly starring as two assistant managers trying to win a promotion. This comedy-drama has the two characters measuring their own self-worth against the job as their families pile on the pressure.

Treading where oh-so-many other comedies have gone before, The Promotion jumps into the workplace comedy ring with two interesting actors, but seems to have trudged over a number of toes in the process. On the one hand there are lots of unfavourable reviews that call the film shallow and off-balance, but just as many critics went all out in their praise.

“At last, we have a completely and profoundly American movie with all the classical skills of timing, editing and character development that we associate nostalgically with some Hollywood golden age,” Andrew Sarris wrote for the New York Observer, even as Lou Lumenick from the New York Post called it “easily the worst movie I’ve seen so far this year.”

Arriving on television this week…
On top of the first season of The Big Bang Theory, there is a lot of television arriving on DVD this week including the comedies The Office, season four, and Cheers, season ten.

There is also the first season of the Eli Stone, the third season of Supernatural, season four of Desperate Housewives, and Ghost Whisperer season three.

On the Canadian front, the sixth season of Degrassi: The Next Generation comes out on Tuesday, plus the first season of Rent-a-Goalie.