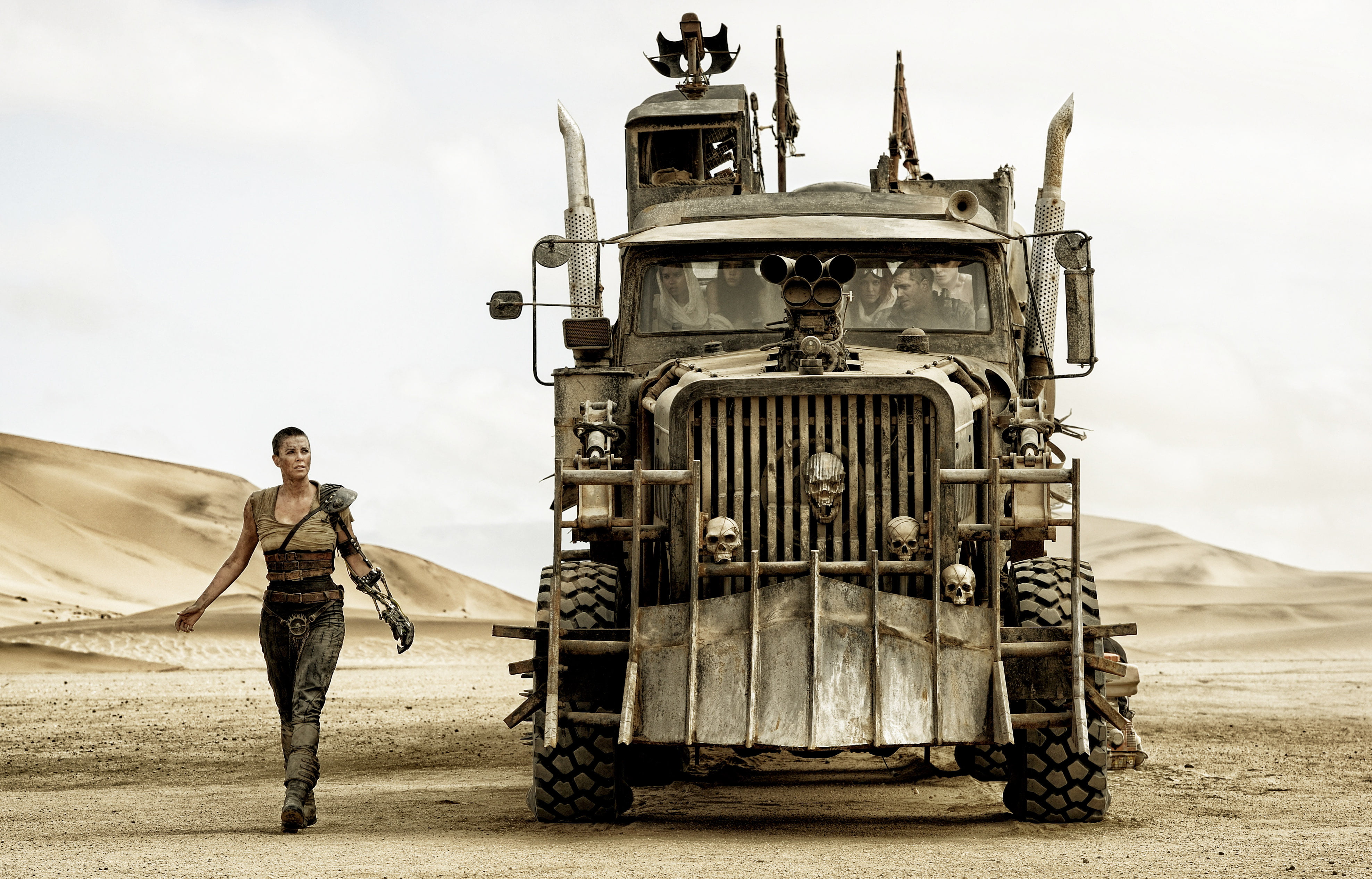 Badass. There’s just no other way to describe Mad Max: Fury Road. It’s a film like we’ve hardly seen in years and years, and both director George Miller, the man behind all of the original Mad Max films, and Warner Bros., deserve big credit for making it a reality without watering it down.

The stunts are huge, the visuals eye-blazing, and the casting is genius, not to mention the perfectly sparse script that says just enough, but leaves room for sub-text, big, bold characters, and the always gigantic action sequences.

This is what an action movie should be, without being stupid or slow. It’s not concerned with branding, toy sales, and it’s confident in a way that will knock you into your seat from the very start.

Tom Hardy stars as the truly mad, Mad Max, a man who lives with the demons of his dead family, but gets dragged–almost literally–into a bigger story when he finds Imperator Furiosa, played by Charlize Theron, and the women she is trying to save from a local warlord who controls a horde of local zealots. It’s a big, bad, dusty reality in Mad Max: Fury Road, and Furiosa is trying to find her way to paradise in a world that seemingly lives on three fluids: gas, water, and mother’s milk–in that order, and all controlled by Immortan Joe, played by the fantastic Hugh Keays-Byrne.

After Max is captured and turned into a “blood bag” for one of Immortan Joe’s driving minions (Nicholas Hoult as the insane but redeemable Nux), Furiosa’s treachery is discovered and leads the horde to chase after her through the desert, and through that chase, Max ends up face-to-face with Furiosa and has to make a choice for freedom, or helping her and the “breeders”–AKA The Wives–that she’s rescued, played by Rosie Huntington-Whiteley, Zoë Kravitz, Riley Keough, Abbey Lee, and Courtney Eaton.

The real genius of this Mad Max though is that the star is really Theron’s completely badass Furiosa. Max is merely there to help her on the journey, and Miller not only makes her the star, but all of the women take a big part in leading the story. We see some big spectacles from the men in Mad Max, but when all is said and done, it feels like most of the great deeds are done by the women–from Furiosa to the spectacular Melissa Jaffer as the Keeper of the Seeds. They are rich, have huge back-stories that we can only imagine, and they kick the men’s asses all the way through the film.

Mad Max: Fury Road is not a “reboot”, which is a word I don’t think does this film justice at all, but a visceral, audacious action epic that feels like a master class in action filmmaking. It’s hard to look away for an instant as the cars explode, and the people fly in all directions with some of the most incredible stunts I’ve ever seen on film. 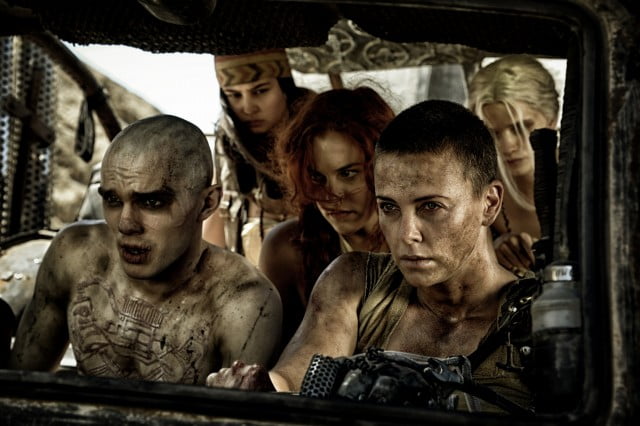 The film is also stunning because most of it looks like it’s a real action movie. We’re not dealing in endless computer graphics for a change, but real filmmaking that uses CGI only when it needs to paint a bigger picture, or pull off a specific visual. This is how films are meant to be made, and there’s not a single scene where the action blurs to the point where you can’t tell exactly what is going on–a complaint I have with almost every major action film that has been in theatres over the last decade or so. Miller’s action is blazing, often very fast, and big and clear on the screen.

Mad Max: Fury Road is not perfect, mind you, and it could have benefited from a light trim in running time, or a more upbeat middle, but it’s hard to wield those complaints too heavily in the face of such a masterful work of filmmaking. Other filmmakers and studios need to watch this film and take notes, because like so few other films, Mad Max: Fury Road feels genuine to the bone, and I can’t praise the way it focuses on the women enough. Theron is remarkable, and any grumbling about her leading the film should die a quick death once you actually see her in action.

Go see it. Just go out and get a ticket and see it. It looks and sounds spectacular on the big screen, and the film’s spirit animal–a kick ass guitar player who essentially shreds the film’s guitar soundtrack while performing some kind of acrobatic act on bungee chords–is worth the price of admission alone and sums up why Mad Max: Fury Road is so perfect: it’s expertly audacious on a level we’ve never seen. 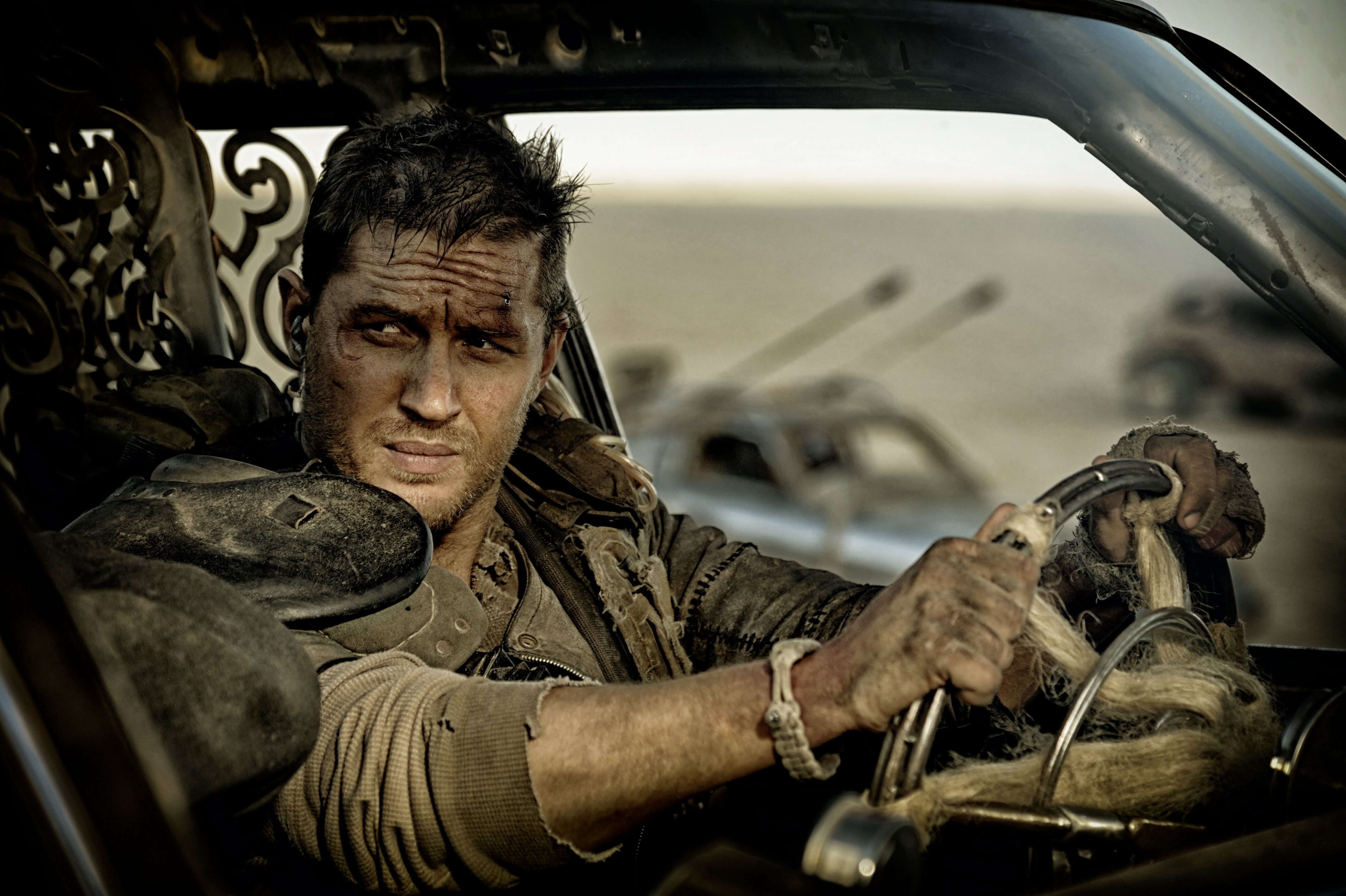 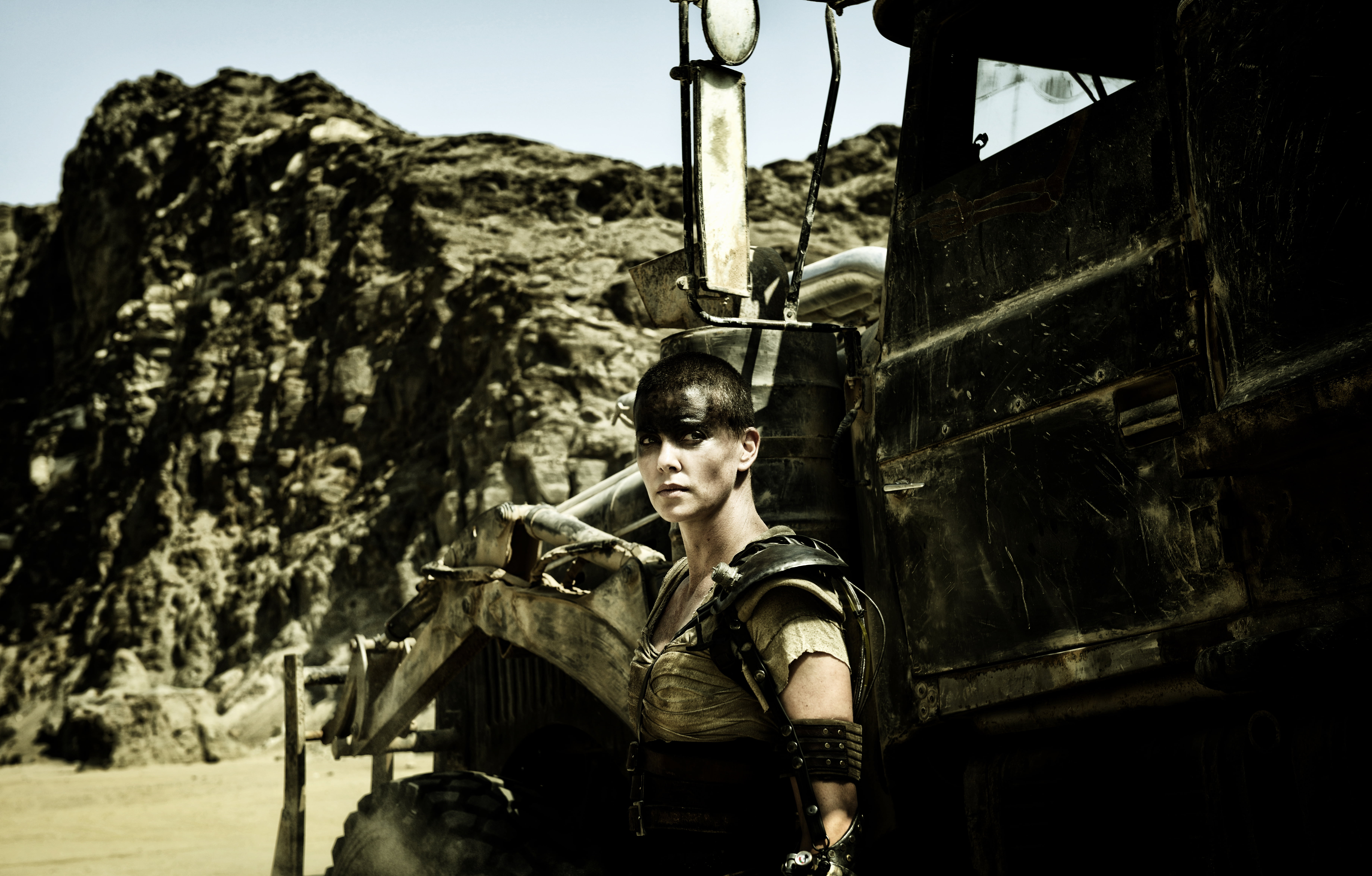 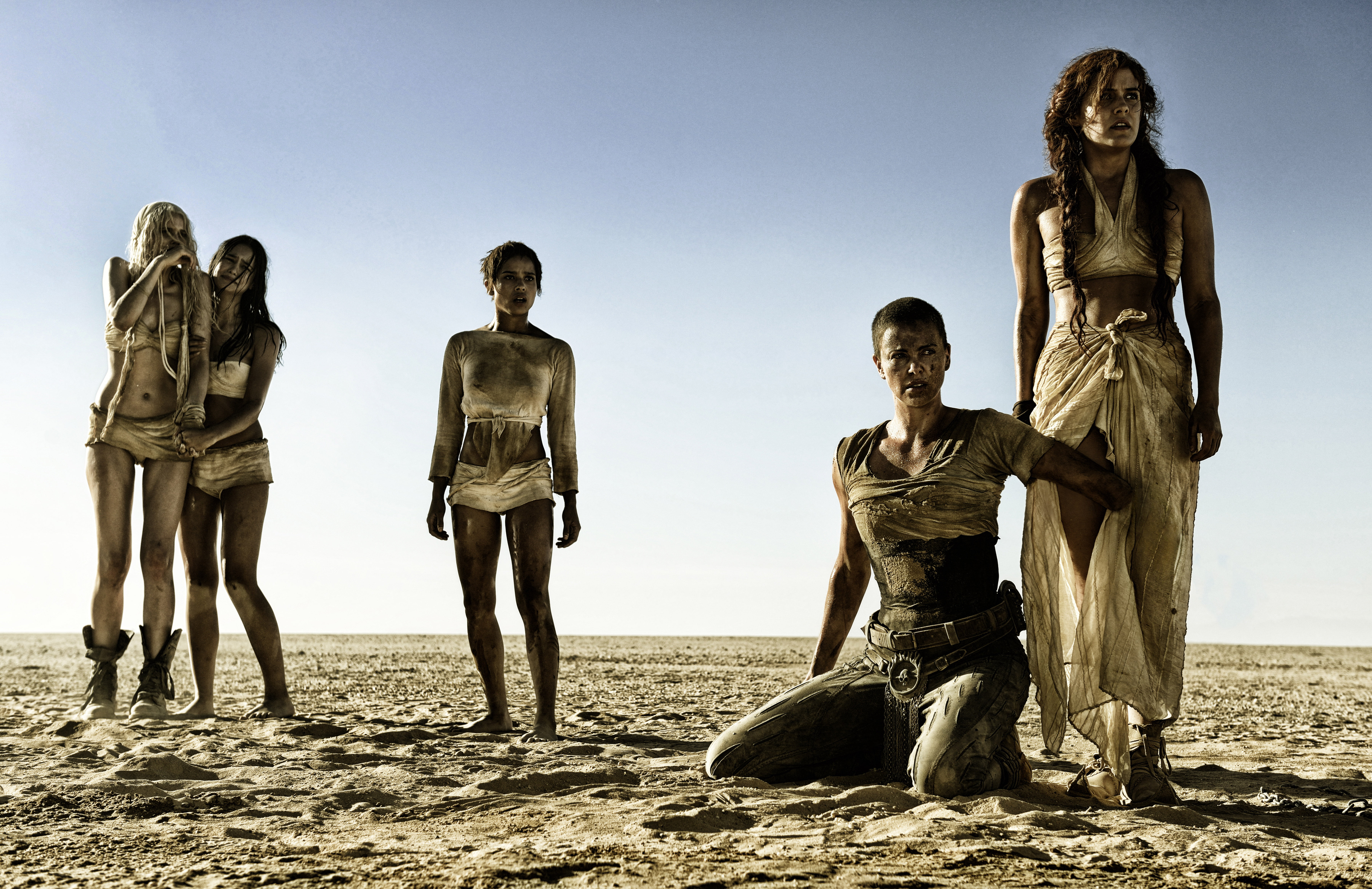 The Wives of Fury Road 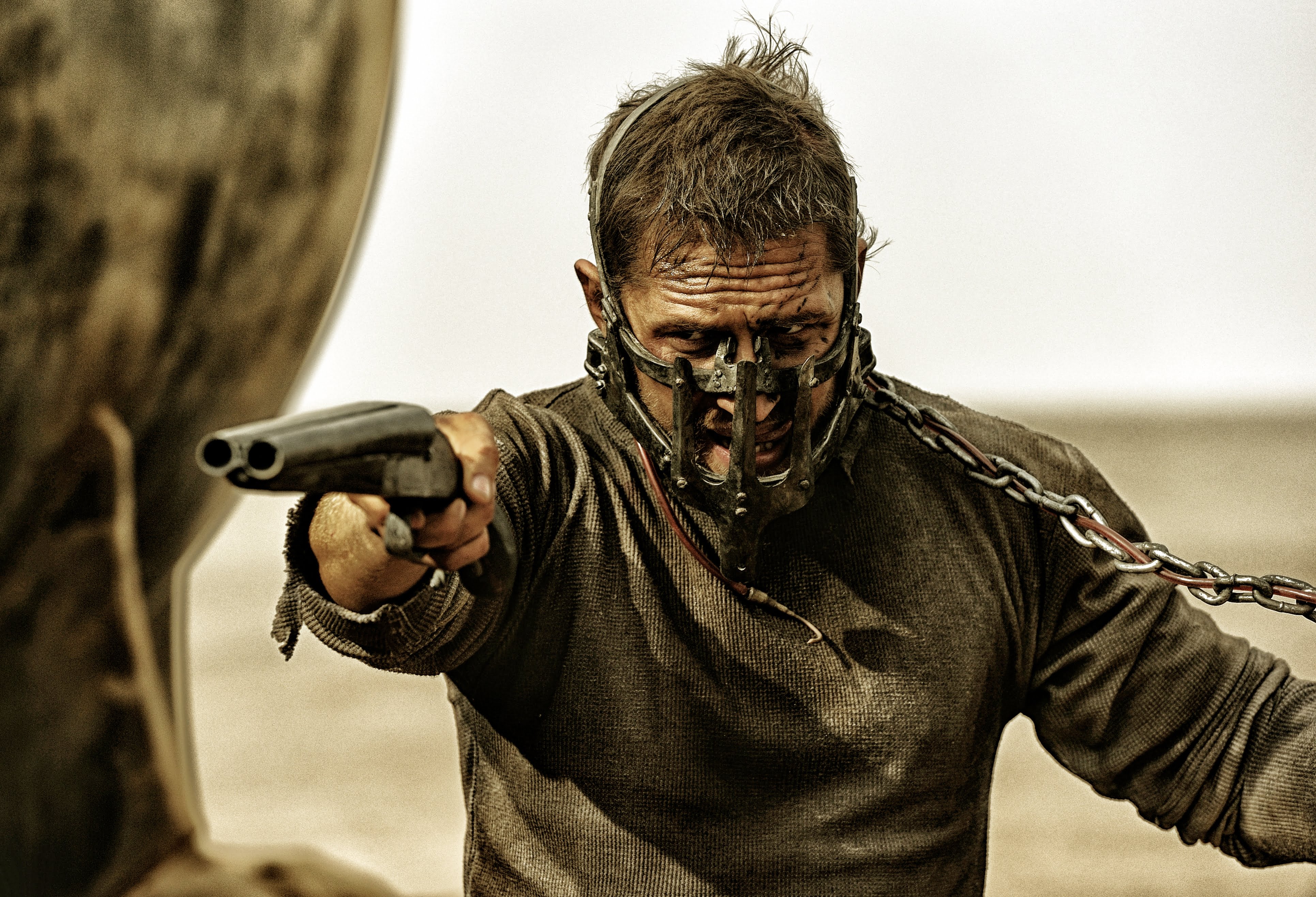