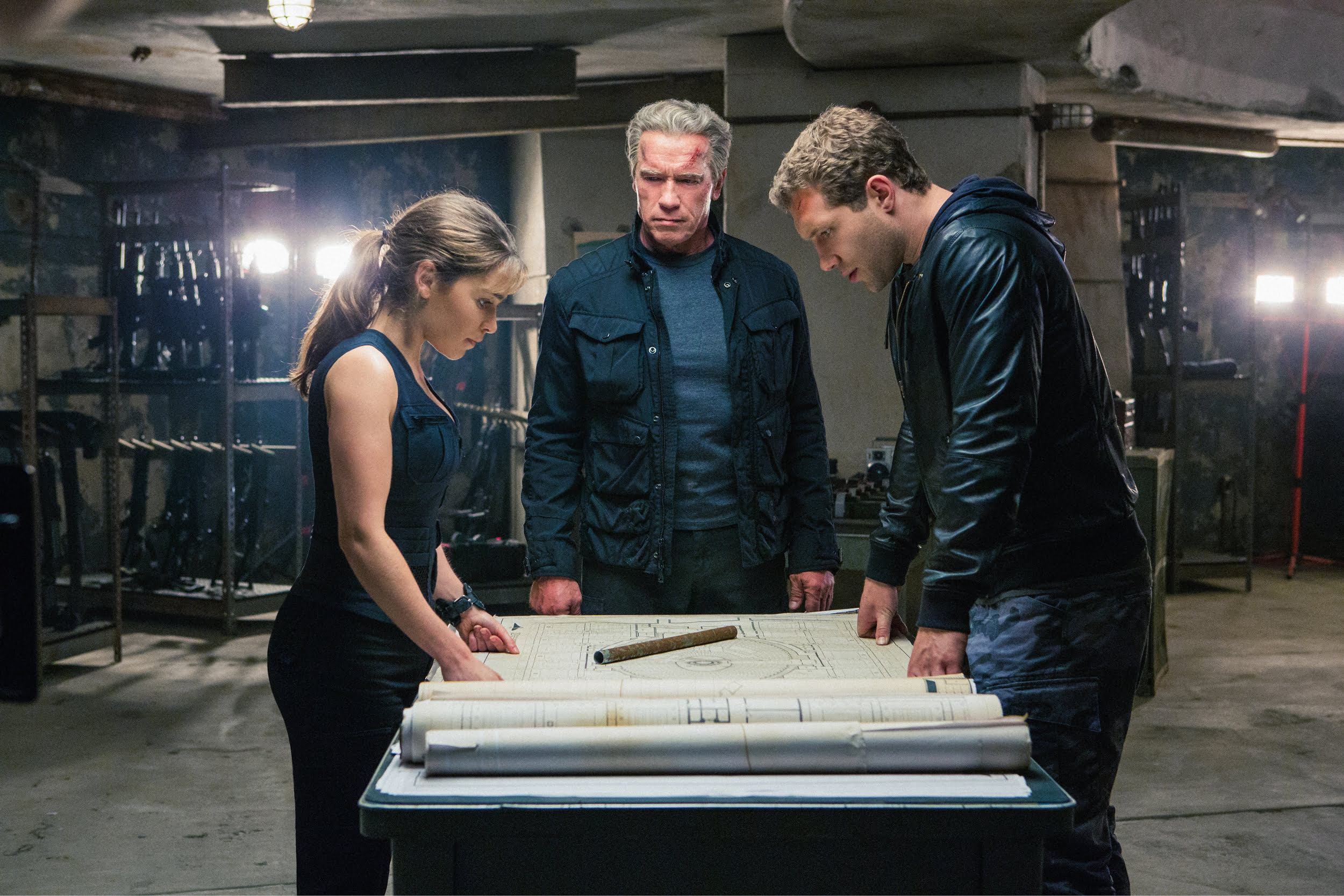 [dropcap size=big]I[/dropcap] went in to Terminator Genisys very interested to see where they were taking this thirty-year-old franchise, especially since I knew Paramount had already gave the green light to two sequels before this film was even close to being finished (partly due to the fact that all rights to this franchise revert back to James Cameron in 2019). And the start of the film–the first half hour–was very interesting indeed, but then it just seemed to turn in to a Roadrunnner cartoon.

Director Alan Taylor (Games of Thrones, Thor The Dark World) does a good job handling the action and the effects but the story is indecipherable after a certain point, and unlike the original Terminator and Terminator 2: Judgement Day, which also had indecipherable stories but the action and atmosphere and the performances were handled by Cameron in such a way that you didn’t notice.

In this film you do notice.

I quite liked the way the movie began–it was like a remake of the original Terminator intertwined with elements of Terminator 2 as well, but told from a slightly different perspective. Then, when Sarah Connor is introduced, the whole thing goes wrong.

Actress Emilia Clarke is just wrong for this role across the board. She doesn’t look tough, she doesn’t sound tough, she has awkward and silly dialogue (not her fault) that she delivers in a completely unconvincing manner. She doesn’t look like a hardened warrior–she looks like they sent a limo to the Four Seasons in Beverly Hills and picked her up each day by the pool.

Jason Clarke playing John Connor is also hampered by ridiculous dialogue that consists mostly of trying to explain what the hell he is doing in scenes he has no business being in, but he has an interesting face and is a good actor so he fares a bit better than Emilia fares.

Jai Courtney is okay but again, he looks way too gym-buff and soft to pull off the hardened soldier role he is playing, and he looks like Channing Tatum and most of the other leading man actors in Hollywood–he just seems like he is another Hollywood pretty boy playing a tough guy (Michael Beihn playing Kyle Reese in the first Terminator, had a crazed, angry, wiry look about him that worked perfectly).

Which brings us to my favourite actor in the movie–Arnold Schwarzenegger. Seeing Arnold back in his Terminator leathers is great fun and at 67 he pulls it off just fine (although there is an awkward scene during which an explanation is given as to why this Terminator is looking like he has aged). Arnold playing the robotic cyborg ends up, strangely, being the most convincing character in the film.

Terminator Genisys looks very good and has wicked sound effects and sound design and the visual effects are what they should be–big and noisy and full of property destruction of all descriptions but the story are so convoluted and ridiculous that it quickly gets distracting. Good movie plot twists make you sit up and think, “Oh yeah, I forgot about that guy…” or “wow, I didn’t see that coming…”–in this movie the twists are thrown in without any rhyme or reason which very quickly make the story almost impossible to follow, even at a respectable distance.

Terminator Genisys will be big hit because it has the look and feel of a video game and let’s face it, that is what the action movie audience seems to want nowadays, but what it could have used is a lot more of the grit and toughness of the original Terminator and Terminator 2: Judgment Day.