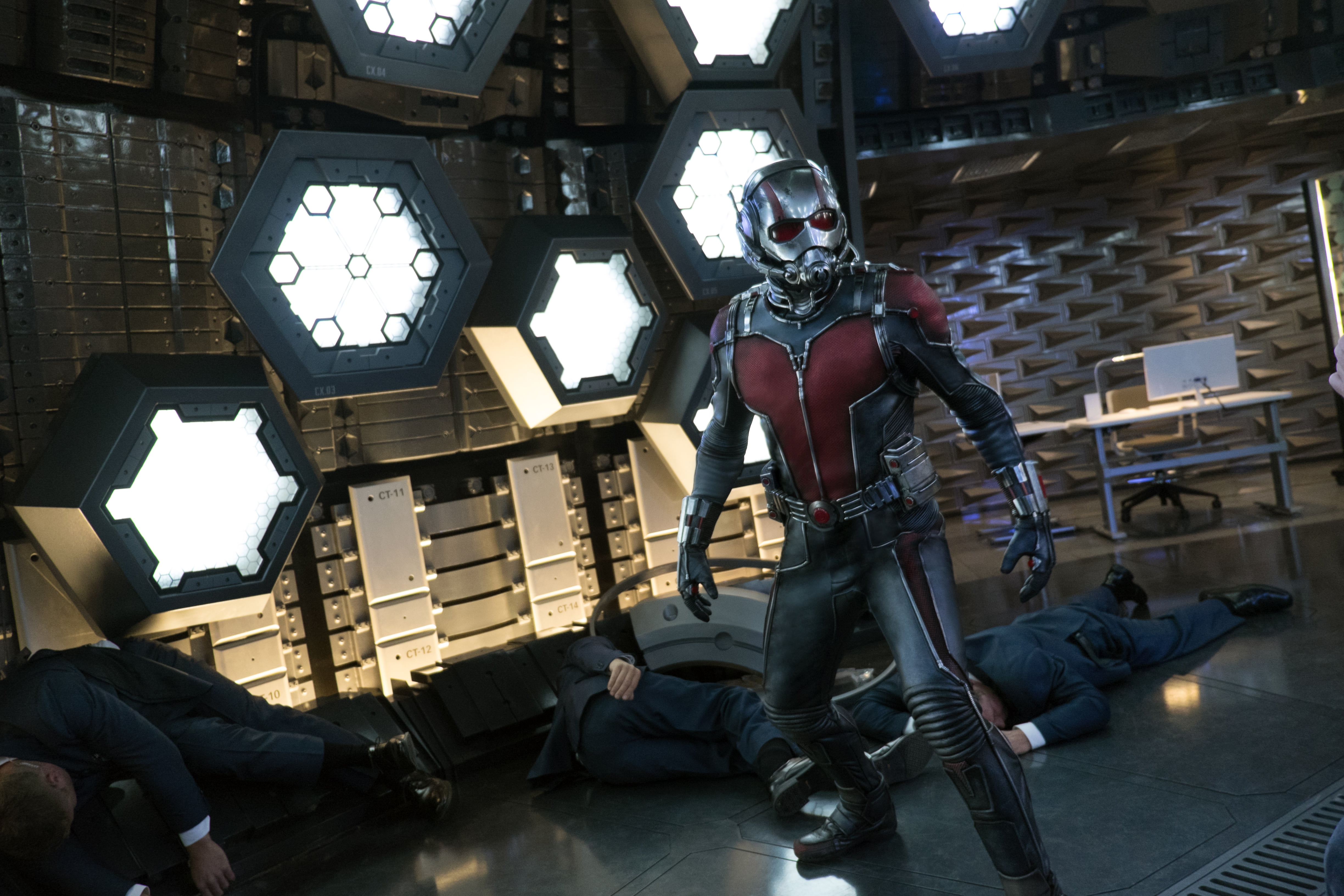 My expectations for Marvel’s Ant-Man were pretty low going in. In my mind, if there was a Marvel film that was going to fail, it was going to be Ant-Man. The character just didn’t strike me as all that interesting, and the departure of previous writer and director Edgar Wright had me wondering what kind of mess might be waiting for filmgoers.

But Ant-Man is a surprising adventure, and a fresh perspective in the Marvel Universe as well. The film naturally has a few flaws, but it will make you wish the film was longer, and features a cast that is easy to love.

Paul Rudd stars as Scott Lang, a Robin Hood-style thief who stole from people who had essentially gotten rich off of bad deeds. When we meet him, Scott has just been released from prison and he wants to give up his life of crime so he doesn’t end up back in prison.

When he can’t find a way to make any money though, one robbery could help him find a new life–he hopes–and help him start over with his young daughter. 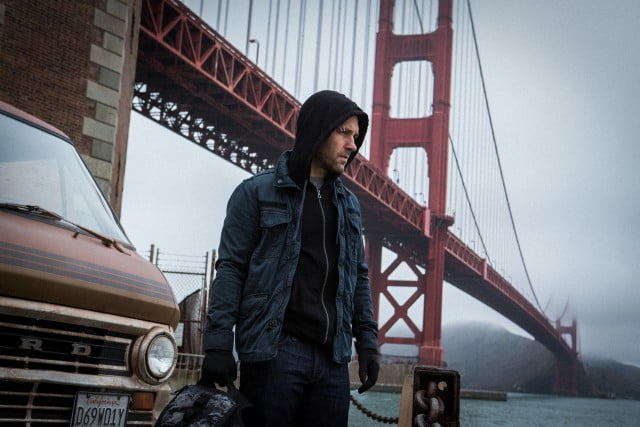 Scott’s hope seems dashed though when the robbery ends up earning him an odd prize: a funny looking suit and helmet that he doesn’t realize holds the power of Ant-Man.

The whole job is actually a set-up, as we find out. Hank Pym, played by the wonderful Michael Douglas, invented the Ant-Man suit, and wants to keep the technology out of the hands of his dangerous would-be protégé, Darren Cross (Corey Stoll), and Scott may be his only hope.

For Darren, the technology is just something he can use to make Hank’s former company rich, and Darren has been trying to discover the Pym particle, which powers the suit, since Hank took over the company.

Then there is Hope van Dyne, played by Evangeline Lilly. Hope is Pym’s estranged daughter who is working for Darren and has her own axe to grind with her father, and Scott is simply in the way.

At the core of the story is Scott playing the part of a super-powered micro-thief, who also happens to be tough enough to fight thanks to the power of the suit. That power means that Scott may be as small as an ant, but he packs the same weight to wallop the bag guys.

Visually, the tone and style of Ant-Man’s powers are both fun, a little zany, and original to the Marvel Universe. The way he shrinks, the way some objects (like an ant, actually, and then a toy train) get en-biggened, and even the way Ant-Man fights, are all done with a purposeful comic sensibility, to some degree, and it’s fun to watch as the film switches between those perspectives.

The visual style of the epic final battle is both exciting, and hilarious at times, and that’s exactly why Ant-Man works. 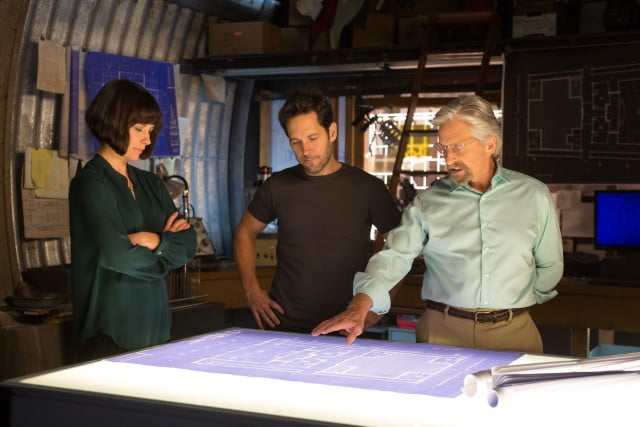 The cast is also just so much fun, it’s hard not to get carried along. Rudd is perhaps not quite as funny as I expected, but he makes Scott seem more realistic, for the most part, while his co-star Michael Peña steals pretty much every scene that he’s in as the comic relief.

Corey Stoll is pretty good as the villain, although he’s a bit too easy to spot as the villain, but he makes Darren seem legitimately crazy for success and any attention that he can grudgingly pull out of Hank.

And then there’s Douglas and Lilly. The chemistry between the two stars is great, although it could have possibly been a little more tense early on, but I simply loved Douglas in Ant-Man. Likewise, Lilly is an ass-kicking heroine who just needed an even bigger role, but she’s wonderful opposite Rudd.

Which brings me to one of the biggest problems that I had with the film: Lilly’s role should have been much bigger. Marvel is desperately short on heroines, and Hope is a hero that deserved more screen time. Ant-Man‘s co-hort, Wasp, is woefully lacking from the film, and that seems like a mistake on every level, especially when you have Lilly already on screen for so many scenes already.

At least Hope proves she can rough up Scott with no trouble, but that’s an inadequate tease, and fans shouldn’t have to wait longer for Wasp.

My other problem with Ant-Man is that, while the visuals are fun, it is hard to believe in the character’s powers to battle full-sized humans while he’s the size of an ant. This was just one of those elements that I had to try to accept, but it’s difficult, no matter how you look at it. Next to Captain America’s shield and muscles, Iron Man’s iron, and all the rest, Ant-Man is a little harder to accept. 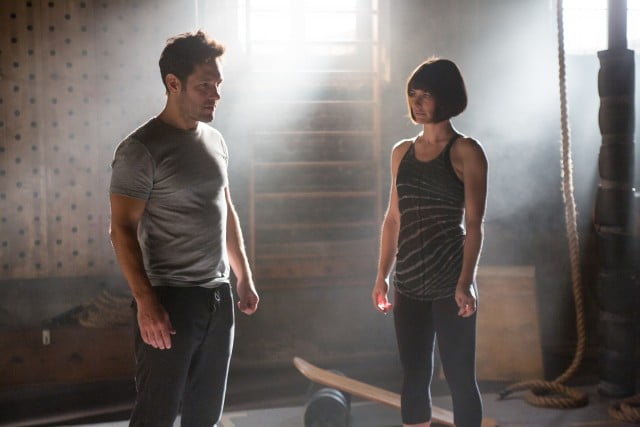 Finally, let’s just say that Marvel has an issue in a lot of films where heroes tend to have to battle their own powers. Iron Man had Iron Monger, Captain America had the Winter Soldier, The Hulk had Abomination, and so on. Ant-Man is one of the few times that I didn’t begrudge them that storyline because it worked so well, but I’ll still say it’s a grievance that they didn’t push off into new territory for a change.

But, Ant-Man absolutely left me wanting to see more. A lot more. Ant-Man is just as likable as every other Marvel hero, but he has the distinct advantage of also seeming like the first approachable hero in the whole Marvel Universe. As one person put it recently, you could see yourself having a pint with Scott, and that’s a trait I appreciate when so many heroes seem to be from other worlds–literally and figuratively.