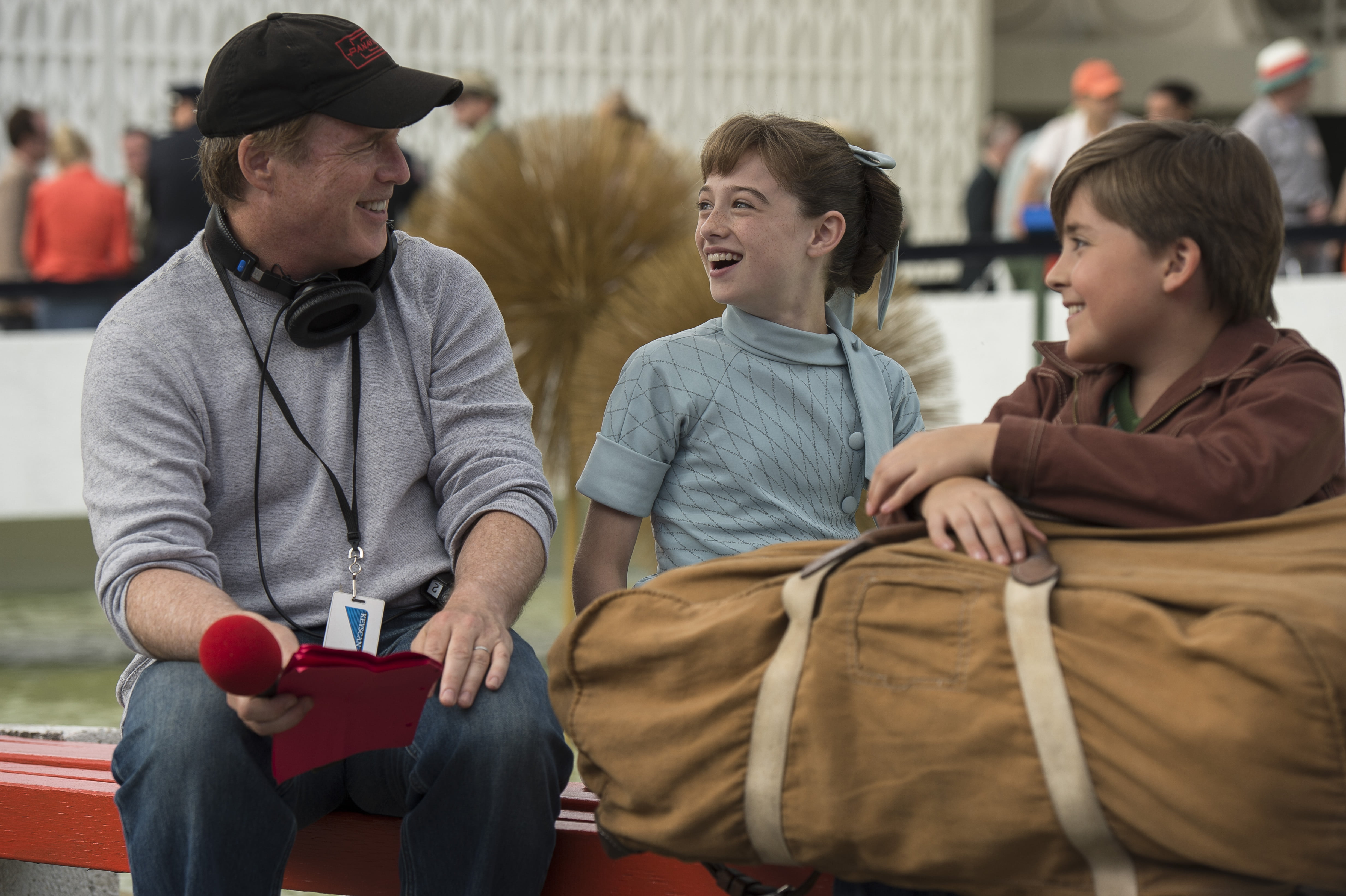 Disney’s Tomorrowland recently arrived on Blu-ray and digital HD, and it’s one of the rare films in recent memory that personifies hope and a future that could be brighter and better. From the cast to the story, and even in some of the smallest details, hope seems ever-present, which is a message writer and director Brad Bird, and screenwriter Damon Lindelof, imagined from the beginning.

Andrew Powell: It’s really a pleasure to chat with you. I’m a huge fan. For Tomorrowland, my first big question is when you were developing the story, and I think it’s something you can recognize, the idea that, the 40s, the 50s, the idea of the future seemed very bright and polished and then perhaps over the years there was a less glowing concept of what the future might be. Was that something that you were thinking about as you developed the film, that came into perspective early on, or when did that come into the story?

Brad Bird: “Yeah, it came–Damon Lindelof was doing a little work on the very end of Mission Impossible, the one that I did, Ghost Protocol, and he had to do some very surgical writing and fix some problems that I felt were–existed and yet without disrupting anything. And the movie was pretty much done and we just had a little bit of reshooting that we could do that I wanted to do very surgical stuff. And we were working together and we had lunch and I asked him what he was working on and he mentioned this idea and we fell into a conversation about how the future had changed from when we were kids and we talked about how, you know, when Disney was alive in the last decade or so of his life, the world was not a better place.”

“There were race problems and Vietnam was an ongoing war and there was political assassinations and the Cold War was in full bloom and it’s not like the world was this perfect little place and yet the collective vision of the future was sort of a positive one. And we noticed that somewhere along the line that it changed and we wondered why and we thought, you know, could that be something that, you know, that kind of undergirded sort of fable. And so that’s how that sort of started.”

Andrew: It obviously seems natural now that I see the finished product, but how did the role of hope play a part in this because it’s such a hopeful film. Even from early on all the way to the end the idea of hope is just so intense. It’s wonderful.

Brad Bird: “Oh, thank you. Well, we kind of felt that, you know, that has to be. The future that we’ve been kind of–that has been sort of stated over and over again for us is that there is no hope and that we have no say in the future and that we’re all doomed to a planet that is collapsing and, you know, is always engaged in perpetual war and that’s kind of it and we–that we better just accept it. And you know, I think that many of my favourite films and many of Damon’s favourite films are sort of apocalyptic stories, you know.”

“I love Terminator and I love Road Warrior and Blade Runner and all kinds of movies about a dystopian future. But somewhere along that line that began to be the only future that anybody thought was credible and the only future that was ever really realistic. And I kind of started to feel, as did Damon, that it’s sort of a self-fulfilling prophecy. If that is the continual vision of the future that is repeated and repeated and stressed and sort of enhanced and–it seems like that becomes something that people make true because it’s the only future that they believe they can have. And you know, the film kind of tried to say that not only that dreaming is important, but that really dreaming is only step one. You have to then take all the other steps to make a dream happen.”

“Someone mentioned to me the other day–the journalist asked why the–when you touch the pin you’re in the field of wheat instead of just inside–and you can see Tomorrowland in the distance rather than just being in Tomorrowland. And I said, well, it was important to us that it be visible and in sight as a destination, but it requires something of you to get there. You have to then take steps to get there. And I think that if it’s in sight, if we know what it–what kind of world we want, then that will help us tremendously in taking whatever steps are necessary to get there. But first we have to have it in sight and next we have to be willing to confront whatever we meet on the way to getting there.” 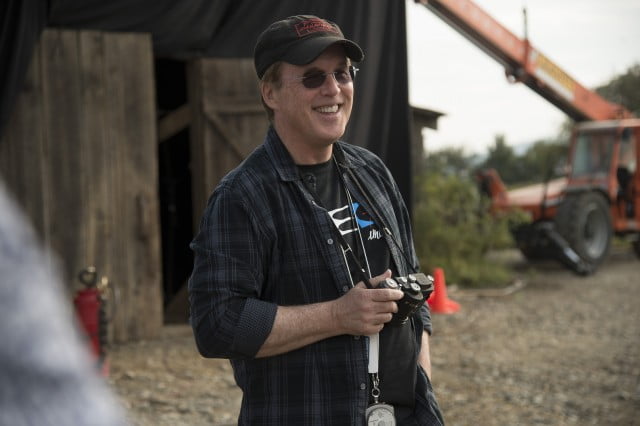 Brad Bird on the set of Disney’s Tomorrowland

Andrew: That’s awesome. I mean, as a viewer I really appreciated that angle. In terms of the cast, at what point did you realize who you wanted in these roles, because they work very well?

Brad Bird: “Oh, thanks. Well, the Frank role and the role of David Nix, George [Clooney] and Hugh [Laurie] were our first choices and we were, you know, over the moon when they both accepted because they were truly who we had in mind. The other roles were tricky and we didn’t really have somebody in mind that perfectly embodied the characters that we imagined and we got very lucky with Britt Robertson and Raffey Cassidy. They were both tremendous finds and we were really happy that we found them.”

Andrew: I hate to single someone out, but I have to say that Raffey was like the gem of the movie to me at times. I mean, I loved everyone but she was incredible.

Brad Bird: “Well, she has a really, really unique role that very easily could have been done wrong. And we had a very strange blend of things that we needed for the film. We needed someone who was kind of a–you could believe was an old soul that had seen a lot and had a lot of wisdom and yet was not made cynical by it, and that was a very tough combination to get together.”

“You could find young girls that were upbeat and cheerful, but they didn’t seem particularly wise. And you could find ones that felt like they were–they’d seen a lot but there was sort of a weariness to them, like they were 11 going on 47. And there are a lot of those in show business, you know, where they’re sort of prematurely old. And that wasn’t right either. And our next best choice for Athena was half as good as Raffey and, you know, we were just–we both completely leapt up when we saw her little audition thing that her father shot on an iPhone. We just jumped up and went, ‘That’s her!’, you know.”

Andrew: That’s fantastic. Well, finally, in terms of The Incredibles sequel, I know you’re being inundated with a lot of questions, but my big one is will you be reprising the role of Edna?

Brad Bird: “Oh well, we’ll see what happens. It’s too early for me to talk about it. All I’ll say is that I’m having fun breaking out that playset again and playing with these characters. But you know, I’m having a good time and give us a little bit of time to flesh this baby out. We’ve just started it, but we’re well underway.”

Andrew: Well, thank you very much. I’m very excited by the idea of Edna returning, among other people of course.