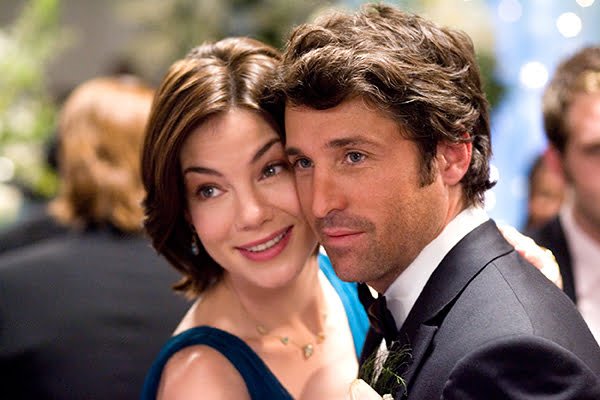 Michelle Monaghan and Patrick Dempsey in Made of Honor

Hollywood will have a hard time coming up with a cuter couple than Patrick Dempsey and Michelle Monaghan, who star in this week’s cheesy romantic comedy, Made of Honor. Also coming to DVD this week, the documentary [email protected] follows an aging choir singing rock songs, Ellen Burstyn stars in the iconic Canadian story The Stone Angel, and Speed Racer crashes in a fluffy disaster of poor storytelling and lame visuals.

Made of Honor
What is it about the movies that makes it seem incredibly romantic for a friend to fall in love with their totally unavailable, maybe even about-to-be-married, best friend? That recycled plot has popped up in far too many films, giving the average mediocre mushy film a bad name, at least in my books.

Grey’s Anatomy star Patrick Dempsey is the womanizing Tom, a man about town who can’t get by without his best friend Hannah, played by Michelle Monaghan. When Hannah goes on an extended trip to Scotland, Tom realizes for the first time that he’s in love with her. Planning to talk to her about it the second she gets back, Tom is obviously a bit surprised when Hannah appears with a new rich, burly fiancé. And on top of that, since Tom is her best friend, Hannah asks him to be her maid of honor.

With ever more ridiculous twists to win her over, Tom tries to be the best maid of honor that he can be in the hopes that he can win Hannah away from the seemingly perfect Scottish beau.

Both Dempsey and Monaghan are enjoyable in Made of Honor, and they have a fun chemistry when they’re together. The story however is a sad collection of silly moments, with unoriginal gags tossed around dimwittedly. A few laugh-worthy scenes make their way into the dull plot, but they are not enough to make Made of Honor any more enjoyable.

Couples will likely be very tempted to rent Made of Honor for its cute packaging, not to mention the appeal of its stars, but there are far better films worth checking out. If all you really want is cute though, Made of Honor at least delivers.

[email protected]
Documentaries just don’t seem to get the respect they deserve among popular audiences, but great films like director Stephen Walker‘s [email protected] should go a long way to changing that.

The film is a glimpse into the lives of an elderly choir, with an average age of 80, who set out to learn classic rock, punk, and soul songs. Led by conductor Bob Cilman, the group learns hits from the likes of the Clash, the Ramones, and Sonic Youth.

While the film was originally produced for the BBC, it was re-released this year in theatres and made a splash at the Sundance film festival. [email protected] has been well reviewed by most critics who gave it top marks for being funny, but not mean to the aging singers, and full of heart.

“An undeniably sweet mix of disarming honesty, inspired gumption and brutal reality,” Tom Long wrote for the Detroit News “[email protected] somehow manages to avoid the maudlin while enhancing the obvious with its portrait of a chorus of senior citizens who sing contemporary rock songs.”

The Stone Angel
Margaret Laurence‘s seminal Canadian novel comes to DVD with Ellen Burstyn playing the role of the fierce Hagar Shipley as she tries to reconcile her life. Christine Horne stars as the younger Hagar and the film also co-stars Dylan Baker and Sheila McCarthy.

Critic Philip Marchand with the Toronto Star noted that the film fails somewhat in trying to update the story to the present day, but other critics agreed that the performances by Burstyn and Horne are well played, even if the film isn’t ultimately satisfying.

Speed Racer
From the guys who brought us The Matrix comes a disappointing, kaleidoscope of animation, colours, and tacky images sure to please kids and repulse adults.

Written and directed by the Wachowski Brothers, Speed Racer is a modern reimagining of the classic cartoon of the same name with Emile Hirsch as our title hero, and Matthew Fox as Racer X. With cheap visuals, and an even cheaper story, the film follows Speed as he grows up living in a family that loves to race as he deals with the corrupt characters who control the industry.

Speed Racer crashes and burns under the weight of a million poorly executed edits, a frayed storyline, and some of the ugliest special effects I’ve ever seen. There is also something terribly disappointing in a film that features so many fast cars that seem to have no connection to reality, or that most important element of true danger.

Pirates of the Caribbean Trilogy (Blu-Ray)
Finally, Disney debuts the Pirates of the Caribbean trilogy on Blu-Ray, with a pile of features included for the ravenous fans. If you haven’t already picked up the films on DVD, or you want to get Johnny Depp looking even better on your big flat panel TV, this is a great boxed set, even if the final film reeks of dead monkey.

Check out some of the latest television coming home this week, with season three of Criminal Minds, the first seasons of Pushing Daisies, Private Practice, and Chuck. Not to mention season eight of Will and Grace, and CSI: Miami season six.