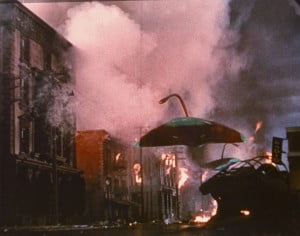 Mission: Impossible 3 has seen some ups and downs over the last year and as a result it now looks like the mission to make the film may be more impossible that previously thought. For Paramount that could have been bad news, but as it turns out some little green men are coming to save the day!

According to the Hollywood Reporter director Steven Spielberg and actor Tom Cruise are banding together once again in favour of remaking The War Of The Worlds for release next year as Paramount has shoved Mission: Impossible 3 on the back burner.

The screenplay is being written by Spider-Man and Panic Room scribe David Koepp and is based on the classic story which was originally written by H.G. Wells. In the original story, which was later dramatically presented on the radio by Orson Welles – who also convinced his listeners that it was actually happening, Martians descend upon the Earth to take over mankind. The classic image from the story talks of a flying saucer shooting beams of fire at nearby buildings.

No release date has been set for the film but our best guess says that you can probably expect to see the film sometime in the summer of 2005. Expect announcements about other cast members in the coming couple of months as the projects gears up to begin filming.

The article goes on to say that Alias creator J.J. Abrams will be making his debut as a feature film director on M:I 3, but that won’t happen until some time next year, even though Paramount had wanted to start things rolling within the next couple of months.