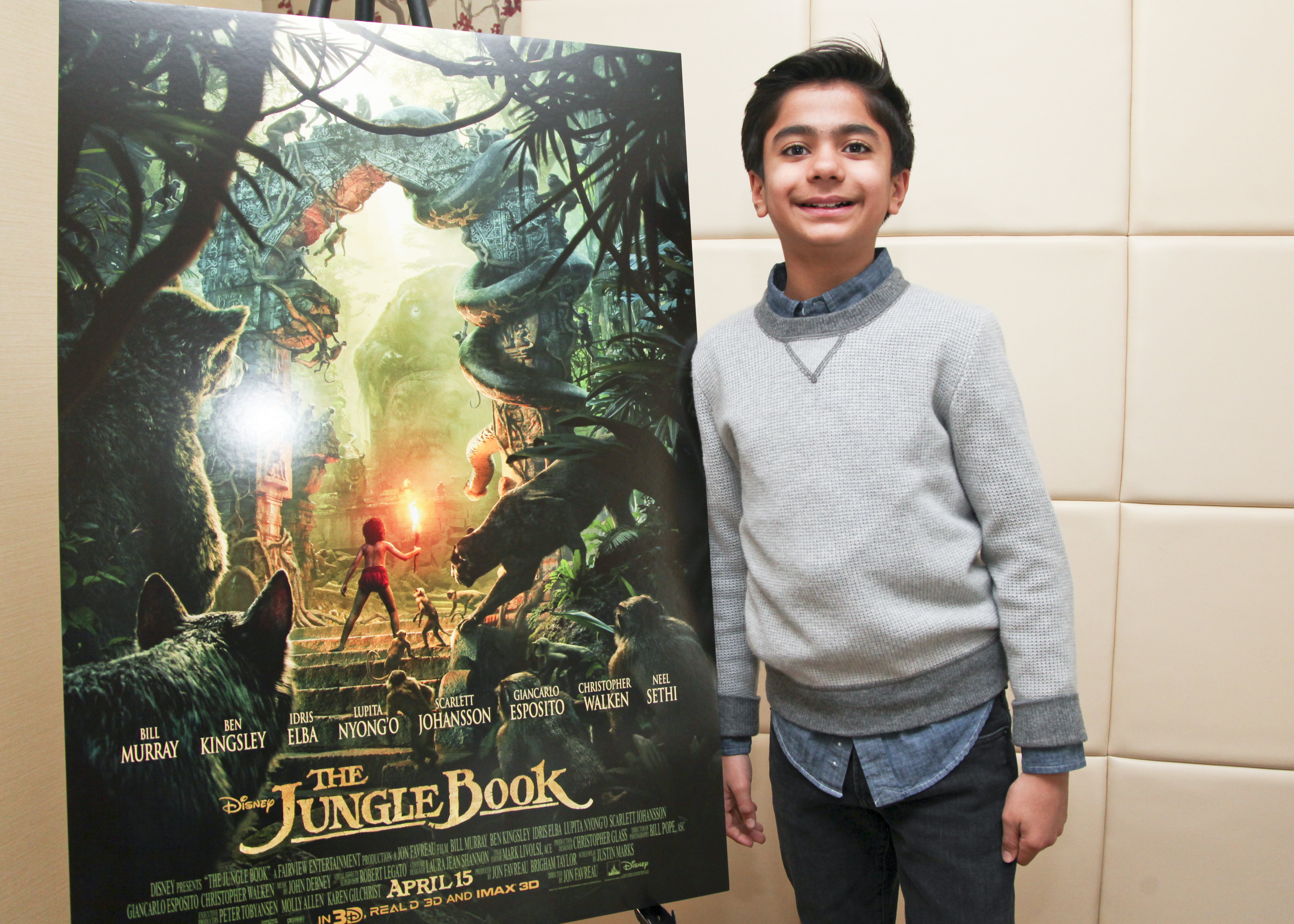 Neel Sethi is a natural. In director Jon Favreau’s The Jungle Book, Sethi leaps off the screen, and he’s got a lot of competition on that screen too.

Opening last Friday, The Jungle Book is Disney’s most intriguing title in some time because it’s melds live-action filmmaking with the stunning world of photo-real animation. And when I say a world, I mean it. Aside from Neel Sethi starring as the young Mowgli, almost nothing else in the film is real. It’s all animated, and it’s beautiful.

The jungle and the environments look exactly like they should, but they’re animated. All of the animals look real, but they’re animated too. Everything is miraculously, and stupendously animated, breathing life into this world, while giving these creatures the ability to act and perform opposite the very expressive Mowgli.

And believe me when I say that Mowgli stands his ground, and it looks like he’s there fighting for his right to be part of the jungle.

The Jungle Book is a twist on the original animated film, telling Mowgli story as he is adopted by the animals of the jungle, but forced to leave when a fierce tiger named Shere Khan–voiced by Idris Elba–threatens the peace of the animals.

Recently, Neel Sethi was in Toronto to talk about making the film, and here’s what he had to say about Jon Favreau’s cooking, working with the director, and his favorite Marvel superheroes.

The Jungle Book is in theatres now.

Throughout The Jungle Book you’re parkouring and just jumping off everything–on dead trees, onto vines, over rubbly land–it’s just incredible. You must be in good shape after that.

Neel Sethi: “Yeah, but I did all that, running and jumping and all that stuff, before this movie because I’m very athletic. It wasn’t that much of a change.”

How long did you do that in the course of a shooting day?

Sethi: “Well, sometimes it was just like, one day would just be walking and like a lot of technical stuff, but [another] day, if there’s stunts–like if it’s dedicated to a stunt day–we do a lot of stunts, and we’re running and jumping and playing. I really like doing that.”

What was your favorite part of working with director Jon Favreau? Was it the brisket he cooked for you?

Sethi: “Well, he’s really funny. I like that he’s very funny. He liked to crack a joke even when there’s nothing to do and everybody’s just waiting there silently. He’ll just crack some joke and everybody starts laughing. It’s funny. I don’t know, somehow.”

How was his cooking? Not bad?

You know, I loved the singing. When you’re riding on Baloo, going down the water, can you tell how you guys filmed that scene? Did you practice the song a lot first? Do you like to sing?

Sethi: “Yes, so it was on a lump of styrofoam with a brown carpet on top and I’m just sitting there on my wet loin cloth–my loin cloth–and it’s basically just me there talking. Jon would get into the water and he would talk with me. There’s one scene where Baloo spits at me, or like splashes me, Jon actually hoses me and I get the perfect reaction and yeah…”

Did you know he was going to do that?

Your reaction is great to that.

Do you feel as though you’re a natural actor? That you can do funny stuff and serious stuff pretty easily?

Have you taken classes?

Going back to the scene, King Louie sings that he wants to be “Just Like You”. Who do you want to be just like or aspire to?

What is it about Captain America?

When you’re doing all these scenes with all these characters, how often was it Jon there getting you to react, or who was it that you were working with to perform against these creatures?

That’s funny because you wouldn’t normally expect the director to be right in there.

It’s a very dramatic story and I shouldn’t say, I don’t want to give anything away but it turns out okay, but we really go through a lot of emotions, and there’s a lot of life lessons in it. Did you learn something that you didn’t know before?

You worked a little bit with Bill Murray. What was that like?

Sethi: “Oh that was a lot of fun. Me and Jon Favreau flew on a private jet to Martha’s Vineyard. We met Bill there and I played football with him while Jon made brisket. A normal day, you know.”

Are you the funny kid in the class?

Did you get to meet everyone from the film?

Sethi: “Everybody but Idris Elba. That would be cool to meet my arch nemesis, but I didn’t get to, but it’s okay. I bet I’ll meet him somewhere soon.”

This was your first audition. So why did you decide to try out for the film in the first place?

Sethi: “My dance teacher was like, ‘You should do this’, and she really convinced me and acting is fun, so I was like ‘Okay!’. It’s really big, but I didn’t know that at first. I didn’t know 2,000 people were auditioning either.”

I bet your dance teacher is pretty delighted.

You said you were a big fan of Captain America, but your director directed Iron Man, who do you follow then?

Sethi: “Can they just like get along and not fight… I bet in like four movies later they’re going to fight DC Comics somehow. Batman Vs. Superman and Captain America Vs. Iron Man. If you watch the trailer for [Captain America:] Civil War, Spiderman comes in at the end.”

Sethi: “I’m kind of leaning towards that because Spiderman is really amazing.”

Sethi: “Yeah! Team Spiderman! That’s fine. Imagine if team Spiderman and Captain America were like [a team]. Like Batman and Robin. Imagine that. Oh my God.”

You should pitch that.