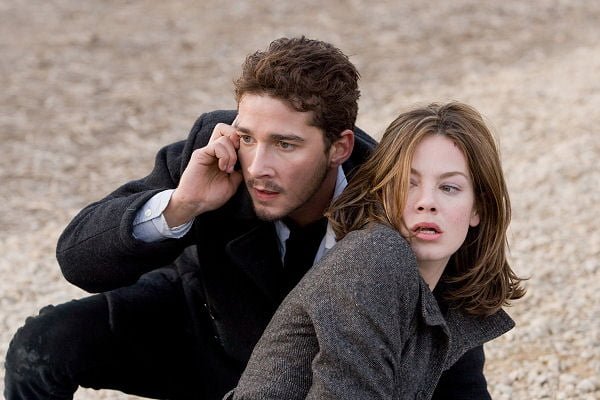 There is at least one common thread shared by the major films coming out this week, and that’s the chilly reception they all received from the critics. From Eagle Eye, Nights In Rodanthe, and Choke, to Miracle At St. Anna, and The Lucky Ones, the consensus this week seems to be a negative one.

Eagle Eye
The first time I saw the trailer for Eagle Eye, I vividly remember rolling my eyes and snorting. Here was the definition of a Hollywood popcorn flick that wanted its cool image far more than a clever plot, or even credible storytelling.

Newly minted A-listers Shia LaBeouf and Michelle Monaghan star as Jerry and Rachel, two strangers thrown together when an unknown woman calls them both. The caller threatens them, and uses technology to force them through ever more difficult situations. With the police hot on their tails, the question quickly gets asked, what is really going on here?

With dozes of bad reviews piling up ahead of the film’s release, Eagle Eye hardly has a chance of winning any awards, but it’s bound to be the biggest film of the week, drawing in the popcorn hungry masses. In my book, there’s nothing wrong with a good popcorn flick, but I draw the line when the film looks absolutely ridiculous.

As Roger Ebert of the Chicago Sun-Times put it, “The word ‘preposterous’ is too moderate to describe Eagle Eye. This film contains not a single plausible moment after the opening sequence, and that’s borderline.”

Miracle At St. Anna
The incredible, and often controversial director Spike Lee delivers his latest film about a group of “Buffalo Soldiers” stationed in Italy during World War II. Spread between two timelines, Miracle At St. Anna is the story of these soldiers trapped behind enemy lines, and years later what happens to one of the surviving men who is being investigated for shooting someone.

Based loosely on real stories from WWII, and James McBride‘s novel, the film explores the bonds between the soldiers while also examining how black soldiers were treated during the war.

Todd McCarthy of Variety was far less happy about the messy film, calling the film “a sloppy stew in which the ingredients of battle action, murder mystery, little-kid sentiment and history lesson don’t mix well.”

Based on the Nicholas Sparks novel, the film has Diane Lane and Richard Gere as two lonely people, thrust together during a storm in North Carolina. With Gere playing a distraught doctor trying to escape a recent mishap, and Lane as an innkeeper dealing with a failed marriage, the film lays on the stereotypes with reckless abandon.

“The movie version of Nights begins with such promise before it drowns in the romance novelist’s syrupy sentimentality,” Roger Moore wrote for the Orlando Sentinel.

Choke
In this adaptation of writer Chuck Palahniuk‘s notable novel, Sam Rockwell plays Victor Mancini, a sexually obsessed loser working as a historical reenactor. With his mother in an expensive mental hospital, Victor earns a little extra cash by pretending to choke at expensive restaurants, where he befriends the wealthy. But, Victor’s life takes an even stranger turn when his usually incoherent mother briefly comes to her senses to reveal that he may have divine origins.

Although nothing like Palahniuk’s most popular story, Fight Club, the common thread in his work is the push-button attitude and over-the-top plots. While the film is getting mediocre reviews for the most part, there are some positive comments from a few big critics. Alex Markerson of E! Online called it “A gleefully profane adaptation of a Chuck Palahniuk novel.” Adding, “Choke suffers from some uneven performances but still might have you doing spit takes in your popcorn.”

The Lucky Ones
Rounding out this week’s collection of badly reviewed films is The Lucky Ones starring Rachel McAdams, Tim Robbins and Michael Pena. The three actors play soldiers who are forced to take a road trip to get to Pittsburgh, which ends up becoming a cross-country trip.

As the trio travels, partly so that McAdams’ character can meet the family of a dead soldier she knew, they will be confronted by issues surrounding the war and their relationships.

The film is only marginally the worst reviewed film of the week, right after Nights in Rodanthe and Eagle Eye respectively, which I can only attribute to the fact that many critics felt The Lucky Ones was overwrought.

As Bill Goodykoontz of the Arizona Republic put it, “The Lucky Ones takes a decent premise – three soldiers returning from Iraq facing domestic challenges upon their arrival home – and crams so much forced drama into it that the movie devolves into a hack buddy picture.”