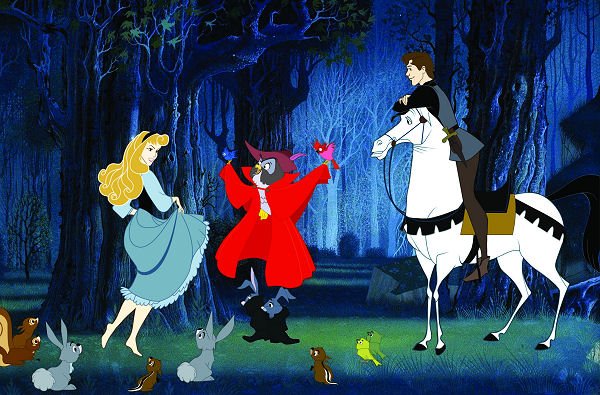 Another week, and another huge stack of DVDs arrive in stores, and in my mailbox. Topping the list is a gorgeous new edition of Disney’s Sleeping Beauty, The Visitor starring Richard Jenkins, and a restored version of Alfred Hitchcock‘s Vertigo. Also out this week is Adam Sandler‘s You Don’t Mess With The Zohan, M. Night Shyamalan‘s The Happening, Beetlejuice, and season two of 30 Rock.

Sleeping Beauty
Marking its 50th anniversary, one of Walt Disney’s greatest films returns to DVD this week a mere five years after it was first released in the format. For the real keeners though, the film is also being re-released on Blu-ray, and comes with numerous extras to celebrate one of the greatest animated classics.

The story is one that many people know off by heart, especially after Disney’s Enchanted so lovingly re-invented the story. Princess Aurora is born into a magical kingdom, and set to be blessed by her three fairy godmothers. But when the evil Maleficent appears, cursing Aurora to die on her 16th birthday, the fairy godmothers can only lessen the curse by making it so she will just fall asleep until her one, true love can revive her with a kiss.

Hidden away in the woods with the fairy godmothers, who raise Aurora secretly as Briar-Rose, it seems that she will break the curse, until on her 16th birthday, one of Maleficent’s minions happens upon the princess. Maleficent will do all she can to destroy Aurora, and the prince who can save her.

Inspired by the classic fairy tale of the same name, Disney’s Sleeping Beauty is about as perfect as a film could be. With music by Tchaikovsky, and some of the most incredible animation ever put to film, the story is simply beyond perfect. Even fifty years after it was first released, Sleeping Beauty is an endearing, dare I say, heart-warming tale. With the re-release, parents and adults have a chance to relive the story, while giving a whole new generation a chance to see what all the fuss is about.

The special anniversary platinum edition comes with a huge assortment of extras that show how the film was made and how it was restored. There are also games, a commentary track featuring Disney/Pixar’s John Lasseter, and deleted music.

The Visitor
In this emotional drama, Richard Jenkins stars as Walter, an aging professor, still recovering after the death of his wife, who returns to his second home in Manhattan to discover a couple living there. Haaz Sleiman and Danai Gurira play Tarek and Zainab, an undocumented couple with nowhere else to go who were conned into “renting” the apartment without realizing it was Walter’s.

In an act of kindness, Walter realizes they have nowhere else to go and offers to let them stay. Tarek and Walter quickly hit it off, especially after Walter takes a liking to the African drum Tarek plays. But when Tarek is randomly stopped on the subway and arrested as an undocumented citizen, Walter is drawn into the couple’s lives even more to try and save Tarek from deportation.

With vivid, but simple storytelling, stand-out performances by the entire cast, and a keen appreciation for music, The Visitor is one of the most memorable dramas I’ve had the fortune of seeing in a while. Jenkins is heart-wrenching in this role, and director Thomas McCarthy brings Walter’s life into amazing focus with a thoughtful precision.

There are only a couple of DVD extras, but they are all well worth checking out. I particularly enjoyed Playing the Djembe, which looks at the work that was put into teaching the actors how to play the African drum. The commentary with McCarthy and Jenkins is also a very interesting look behind the story.

In Vertigo, James Stewart stars as former detective John “Scottie” Ferguson. Suffering from vertigo after an incident where he nearly fell from a rooftop, which actually resulted in another police officer’s death, Scottie is now a retired bachelor when an old friend asks a favour.

Gavin, played by Tom Helmore, is concerned about his wife Madeleine, played by Kim Novak, who has been wandering the city in a haze. As Gavin explains, Madeleine seems to be obsessed with her ancestor Carlotta Valdes, but he says she would have no idea that she is related to Carlotta. As Scottie follows Madeleine, he quickly becomes enamoured with her, even as he realizes she is either losing her mind, or as Gavin believes, possessed.

Aside from one short scene that I would like to see cut from the film, Vertigo is a masterpiece of filmmaking, rich in detail, mood, and incredibly stylish. There is also no missing Hitchcock’s tell-tale thumbprint on the film, and his iconic way of building a mystery with characters that feel at once familiar, and disturbing.

The extras on the two-disc set are almost as incredible as the film itself. There is a very detailed film that shows the process of remastering Vertigo for DVD, a commentary from director William Friedkin, a documentary with archival footage and interviews about the film’s production, and my favorite, an episode of Alfred Hitchcock Presents that shares a common theme with Vertigo.

In addition to Vertigo, which is considered one of Hitchcock’s most important films, newly restored versions of his other films also come to DVD this week, including Rear Window, Touch of Evil, and of course, Psycho.

What makes Zohan so funny is the constant slapstick comedy, and hyper-stylized, cartoonish action. Zohan can do push-ups without using his hands, he can catch bullets with his mouth, and he has a perverse sexual desire for women of the elderly variety. It’s one of the silliest films I’ve seen in ages, but I’m still impressed with the way it handles such a big topic.

The Happening
It is hard for me to imagine a film I dreaded more than The Happening. Knowing just enough going, in to realize that writer and director M. Night Shyamalan had finally lost the ability to create interesting stories, I still tried to watch this train wreck with an open mind.

But, as I’ve already made quite clear, The Happening is, in fact, a disaster and I’m not talking about the plot.

Mark Wahlberg stars as a science teacher set loose into the wild with his wife (Zooey Deschanel), and best friend (John Leguizamo), not to mention his friend’s daughter (Ashlyn Sanchez). They escape from the city after an attack, possibly by terrorists, leaves countless people dead and no one safe.

Following cheap, distorted B-movie style logic, The Happening is one of the most laughable big-screen fiascos I have ever witnessed. Shyamalan suggested countless times that the effort was to achieve a modern B-movie, but whatever he wanted it to be, it’s a sad, silly waste of time.

Beetlejuice
After calling Sleeping Beauty a classic, it would seem a bit cheap to put Beetlejuice on the same pedestal, but the film is nevertheless an incredibly fun, inventive movie courtesy of director Tim Burton. Starring the rarely-been-better Michael Keaton as the ghastly “bioexorcist” Beetlejuice, the film is a rapid-fire comedy about a dead husband and wife who are trying to evict the new residents from their beloved home. While the special effects are looking a bit tired after twenty years, the film is still a blast, most obviously because of Burton’s madcap, weird style, and Keaton’s like-minded performance.

Alice Faye Collection, Vol. 2
Five of Alice Faye’s musicals from 20th Century Fox are bundled up for the second volume of films in the prolific actress’s career. Spanning a few of Faye’s films from the Golden Age of Hollywood, the collection includes Rose of Washington Square; Hollywood Cavalcade; The Great American Broadcast; Hello, Frisco, Hello; and Four Jills in a Jeep.

New television on DVD this week…

30 Rock: Season Two
Tina Fey’s Emmy award winning series debuts season two on DVD this week. Starring the incomparable Alec Baldwin, along with Fey, Tracy Morgan, and Jane Krakowski, the series is a show-within-a-show storyline with Fey playing the main writer for a sketch comedy show, and Baldwin as the weird, but ingenious boss.

The set includes a whopping ten commentary tracks, hilarious deleted scenes, a short-but-sweet backstage video, and a discussion about the show with the cast, hosted by Brian Williams.

Plus, among the piles of new seasons arriving on DVD this week, check out season five of Corner Gas, season three of both How I Met Your Mother and Robot Chicken, season two of Beverly Hillbillies and Meerkat Manor, the eleventh season of The Simpsons, and for sci-fi fans there’s the re-release of Lexx, season one.