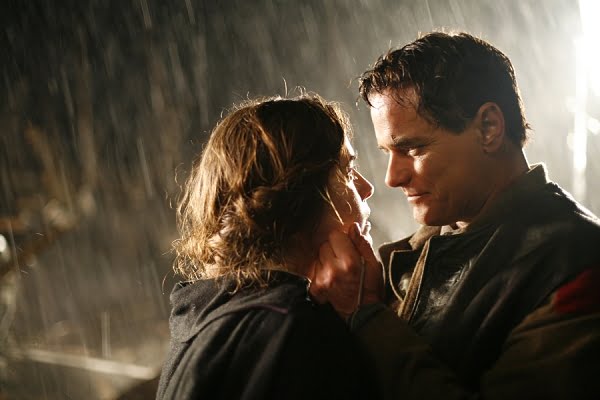 Writer, actor, and director Paul Gross gives Canada a history lesson this week with the epic war film, Passchendaele, while south of the border, Oliver Stone recounts the life (so far) of U.S. President George W. Bush with the somewhat controversial film, W. Also opening this week is video-game-turned-action-movie, Max Payne, the sweet drama, The Secret Life of Bees, and the teen romp, Sex Drive.

Passchendaele
Canada has a proud and almost unimaginably rich story to tell when it comes to our forefather’s contributions during the First and Second World Wars, and in Paul Gross‘ epic drama part of that story comes to life in one of the biggest films ever made in this country.

Set during the First World War, and written and directed by star Paul Gross, the film follows the 10th Battalion during their struggles at the Third Battle of Ypres, also known as Passchendaele. Gross leads the film as Sergeant Michael Dunne, a wounded soldier sent home from France to recuperate in a miltary hospital. Falling in love with a beautiful nurse named Sarah (Caroline Dhavernas), Michael decides that he has to return to the war when Sarah’s brother (Joe Dinicol) enlists. Among thousands of men, the two are sent into one of the most hopeless battles – the battle of Passchendaele.

The film sounds like a true, Canadian classic, which will no doubt be seen in classrooms for years to come, but after debuting as the opening film at the Toronto Film Festival, the reviews have been less than ecstatic about the story. Toronto Star writer Peter Howell offers one of the film’s few quote-worthy reviews.

“Passchendaele hearkens back to war films of decades past, when patriotism, valour and integrity were presented without irony. But it is infused with the stoicism of people who know it is their job to try to find meaning within an insane situation.”

W.
American film legend Oliver Stone has taken on numerous subjects with both style and substance, but in his latest film he tackles the story of one of the most discussed, and mocked figures in modern history: U.S. President George W. Bush.

Starring Josh Brolin as W., Stone has promised that the film will be an all-too-accurate portrait of the man responsible for the Iraq invasion. Delving into his past, leading right up to the big decision, the film examines Bush’s life under his father, his relationship with his wife, and even the man’s faith.

Once again, Stone takes on a story that is both weird and wonderful, with a very rare film about a public figure who is not only alive and well, but still in office. While the reviews are not in Stone’s favour overall, there is no doubt that the film will spark some controversy, and bring curious audiences to see the film, even in Canada.

Kirk Honeycutt of the Hollywood Reporter points out in his review that W. “deserves a fair hearing by U.S. audiences,” since “Stone goes out of his way to give Bush a fair hearing.”

“The film is unable to achieve any aims higher than as a sort of engaging pop-history pageant and amateur, if not inapt, psychological evaluation,” McCarthy wrote, “due to the unavoidable lack of perspective and a final act that has yet to be written.”

Max Payne
Switching gears, Mark Wahlberg stars in the adaption of the classic video game, Max Payne. Tearing a page from Marvel’s Punisher, Wahlberg plays a morose cop, trying to deal with the death of his family while investigating a series of murders around the city. The very pretty Mila Kunis also co-stars as, oddly enough, an assassin.

While I am happy to point out just how many terrible adaptations have been made from really high-profile games, I am willing to give Max Payne the benefit of the doubt if only because Wahlberg is actually a talanted actor. Looking at some solid facts though, the film was directed by John Moore, who is probably best known for his sub-par film, Behind Enemy Lines, and it was written by Beau Thorne, who doesn’t have a single other film on his resume. The most talented artists involved in the film seem to be the actors, aside from composer Marco Beltrami, and to me that suggests a film that is unlikely to rise above its roots as a game with a two-dimensional storyline.

The Secret Life of Bees stars Dakota Fanning as Lily, a young girl in the American South who runs away after her mother dies. Looking to find out more about her mother, Lily is taken in by three sisters, played by Queen Latifah, Sophie Okonedo, and Alicia Keys, who teach her beekeeping.

And Sex Drive is a raunchy teen comedy about another teenager who doesn’t want to go off to college without losing his virginity. So he takes his friends on a road trip to visit a hot lady friend he just met online, in the hopes that she will finally make him a man. Or something along those lines. If that sounds familiar, it should, considering how many movies cover the exact same premise. Expect nothing new from this lame re-tread of the usual teen sex comedy.