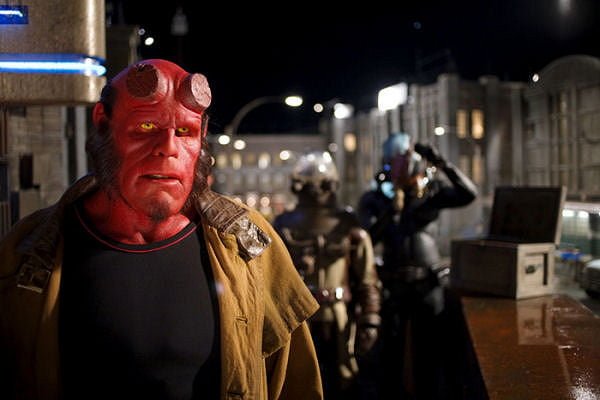 New on DVD and Blu-ray, Hellboy returns to the streets of Manhattan, trying to keep one psycho elf from destroying humanity. While over in George Lucas‘ ever-expanding sequel reality, Star Wars: The Clone Wars takes the universe in an animated direction, sending Anakin Skywalker and Obi-Wan Kenobi off for another adventure aimed at selling more toys and a TV series.

Hellboy 2: The Golden Army (Blu-ray and DVD)
Writer and director Guillermo del Toro is one of the few men working in Hollywood who still gives me hope that filmmaking hasn’t become a lost art. The Oscar-nominated director has a talent for ethereal, otherworldly imagery and characters, shown perhaps most unbelievably in his film Pan’s Labyrinth. But del Toro has another skill that always impresses me, and that’s his ability to weave interesting stories across action/horror hybrids, as in Blade II and more importantly, Hellboy.

Returning to his dream franchise, which he worked to get the right to do, del Toro delivers Hellboy II: The Golden Army with everything the fans have come to expect. Ron Perlman returns as Hellboy, the hellish man-child from another dimension who works for an American organization that is protecting America from evil critters that most people don’t even know exist. Selma Blair also returns as the extremely flammable Liz, and Doug Jones plays Abe, an empathic, aquatic man.

After saving the world last time around from the gigantic entity known as Ogdru Jahad, this time Hellboy is fighting to keep the prince of the elves from releasing an unstoppable army of mechanical warriors known as the Golden Army. And while he is fighting the baddies, and the creatures that are trying to rip his face off, Hellboy also has to decide what role he should play in the world, and exactly where he belongs.

While the first film flowed along at a better pace, Hellboy 2 is actually a much more intense, imaginative ride. There are creatures almost leaping out of the margins of the story, and something interesting around every corner.

The personality of the film, and the story, is really sold through the incredible characters, and yes, even the acting. Perlman and Blair share real emotion on screen, as do all of the key relationships. Even through the makeup and the visual effects, del Toro channels some serious classical storytelling that breaths life into every frame.

Hellboy 2 does try really hard, and it sometimes feels like del Toro could have been reigned in just a tad, but the film is a grand story that stands head and shoulders above all but a few of this year’s Hollywood releases.

Star Wars: The Clone Wars
Six movies were probably enough, so a television series is definitely pushing it to the extreme, but George Lucas seems to have no problem milking Star Wars for all it’s worth. The result of his latest venture is a film that won’t offend die hard fans, but it does strain every attempt at relevancy without offering a shred of new or engaging storytelling, or action for that matter.

Set between the second and third prequel films, Star Wars: The Clone Wars follows Anakin Skywalker and Obi-Wan Kenobi in the midst of the epic battle against the forces of the Sith, led by Darth Sidious, Count Dooku and General Grievous. Joining Anakin in the battle is his new padawan learner, Ahsoka, a feisty youth with a lot to prove as she tries to convince him that she will make a great student. The battle turns more complicated for the Jedi Knights when Jabba the Hutt’s child is abducted, and the good guys have to rush in to help him, or face the loss of important space routes.

And right there, you can imagine already why this film flounders through its plot. Trade routes? Who really cares about shipping issues in the middle of an animated movie about super-duper action heroes who have plasma-like swords that can cut through pretty much anything? And after four films in the last few years, how can Lucas and crew still write such lame stories?

My biggest disappointment with the film was simply that it didn’t capitalize on the new format, or the potential new audience, to do something new and different. While this film may look a little different from the other live action movies, at least in texture, the story is identical to what we have become used to over the past thirty years. And it’s starting to look like Lucas has no idea how lame these stories are becoming, thanks to his own ill-conceived spin-offs and marketing.

The undeniably coolest collection that hits stores this week has to be HBO’s Sopranos: The Complete Series, which brings all six seasons into one set that’s also loaded with features. Other new arrivals include the second uncut season of The Tudors, as well as Torchwood, season seven of 7th Heaven and Scrubs, and ReGenesis season one. Also arriving on Blu-ray this week is the first season of Joss Whedon’s Firefly, and Band of Brothers.