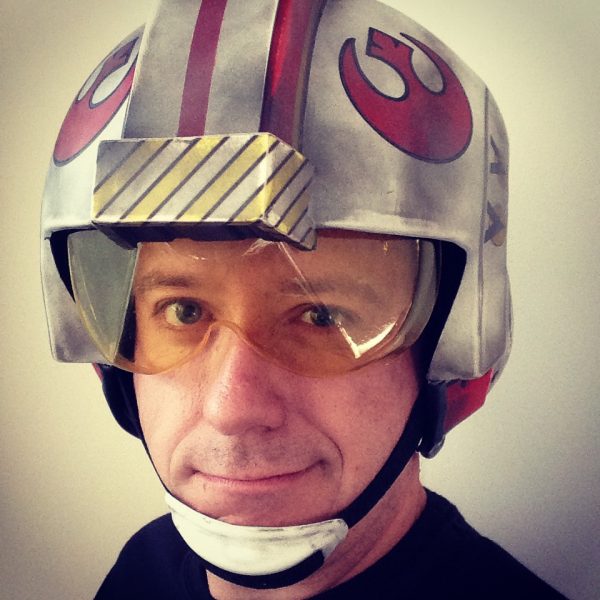 “A long time ago in a galaxy far, far away…” It’s the start of many childhood dreams, especially for those of us born in the 70s who grew up in the midst of the original Star Wars films. The franchise inspired many of us, and gaming critic turned screenwriter Gary Whitta was no different, until he actually got a chance to contribute to the legendary stories with the screenplay for Rogue One: A Star Wars Story.

Recently, I spoke to Whitta about what took him from working as the editor-in-chief of a gaming magazine to writing the screenplay for Rogue One: A Star Wars Story, and what personal elements made it into his work on the script.

Rogue One: A Star Wars Story is available on Blu-ray now.

Andrew Powell: Hello, Gary. How are you today?

Gary Whitta: “I’m good. I feel like I’ve taken a bit of a trip around the world here. I’ve spoke to a French journalist, I’ve spoke with a Mexican journalist, and now I’m talking to you in Canada.”

Powell: Well, hello from Canada! The first thing I wanted to get into is really how did you go from being the editor-in-chief of PC Gamer to writing scripts for these awesome films?

Whitta: “I always say that I’ve been incredibly fortunate to have been able to pursue my two childhood hobbies professionally. I grew up playing video games and watching movies, and my love of video games got me in the door as a game journalist back in the late ’80s. I’ve aged myself a little bit there, but I started as a video game journalist in 1988 and did that for many years. I’ve always secretly wanted to be a screenwriter. That was my dream, but I never really imagined it as being a real logical thing. It seemed like something that other people did. How do you even do it?”

“But I’ll tell you what happened. I got laid off from my job in 2000 and I’d been kicked off the train tracks and forced to evaluate if you want to get back on the same track, or is this an opportunity to try a different track? I could’ve gone back into games, but I’d been writing some screenplays in my spare time, so I thought, ‘Well, I’ve got enough money in my bank account to live very frugally. If I lived on canned soup for a year, I could probably do this.'”

“I wrote a bunch of movie scripts, each one slightly less terrible than the last. Started sending them to people and that’s the beginning of my second career as a screenwriter.”

Powell: That’s amazing. Then how did you get to the point that you were saying to yourself, ‘Hey, I’ve got to go after this job, to try and write this story for Disney and Lucasfilm’? What did you think your odds were when you were pitching yourself for what would become Rogue One?

Whitta: “I remember very well when the news came down that Disney had bought Lucasfilm, and that they were going to make Episode VII, and Star Wars films were back, basically. They were going to make them again. I called my agent. Literally went right from the news story on my phone to calling my agent saying, ‘You’ve got to get me a meeting.’ I’m sure every writer in town was making that same call that same day.”

“Again, you never realistically think someone is going to do that, but then again, it’s Star Wars. You can afford to get the very, very, very best writers. And me, but you can certainly get the best writers. They’ve got Michael Arndt and Lawrence Kasdan to work on Episode VII, and these are the best guys out there. I never really seriously thought I would have much of a chance.”

“But I eventually took a meeting at Lucasfilm which is up here in San Francisco where I live, so I got to go in and see them. Just had a very general conversation. Had no idea what it was about. Lucasfilm was a little bit like the CIA. They guard their information very, very secretly because it is such a high commodity. Star Wars leaks and news and rumors, and they have to guard that stuff very carefully.”

“They told me very little, but then after the meeting they sent me a document that was the idea that John Knoll had had about ‘Let’s do a story about the rebels who stole the Death Star plans.’ What a brilliant idea. John had come up with the initial idea, but he’s not a writer. They needed to hire a writer to flesh out his initial idea, and that’s how I got involved.”

Powell: When you actually started writing this, what was the kernel that developed into your concept for the story? Where did you start?

Whitta: “John Knoll created the very first notion of Jyn Erso, and the idea that she would lead this rebel team that would go and steal the Death Star plans. He had a basic three act structure that was actually still there in the original film. At the beginning of the film, there’s a clue that the Empire is building something terrible and Jyn goes out and looked for it, and they discover it. They discover the Death Star is there. She returns to the Rebellion and then decides to go steal the plans. They recognize the Death Star is going to be their destruction.”

“That idea was always there. What wasn’t so much there in John’s document that Gareth [Edwards] and I tried to find when we came on the film was the emotional core of the film. Why do you care about these characters? You care about Luke and Vader because it’s a father and son in opposition and the beauty of the idea that Luke eventually redeems his father through their love for one another. We were trying to find a way to get that DNA into…”

“Even though this is more of a gritty, militaristic, man-on-a-mission type film, we still wanted to have that essential DNA to make it almost a little bit of its own family saga in the same way the original saga is the Skywalker family. That’s where the idea came from of the scientist who was forced to build the Death Star being Jyn’s father, and that gave her a personal reason to want to go after it. Not just a military mission movie.”

Powell: Sometimes, talking to writers, things that come from a personal place end up investing certain amounts of their own story, or stories that they know from their own family into the film. Was there anything like that for you?

Whitta: “I’m very fortunate that my own family background is not quite as traumatic as Jyn’s. I wasn’t really drawing on anything too personally, but certainly Gareth would say the same thing, everyone who works on these films, they all draw from their own personal relationship with Star Wars, and what are the particular things and moments that we love. If you ask someone, ‘What do you love about Star Wars,’ every single person will give you a slightly different answer. Some of my DNA that is in the finished film are just things from the original film that I loved and that I wanted to see more of.”

“Like Mon Mothma is in the film because I loved Mon Mothma in Return of the Jedi and I really wanted to put her in the film, and the Rebellion needed a leader, and it just made perfect sense. Actually, canonically, it does make sense. If you watch the animated show Star Wars Rebels, you see they just did the episode that shows Mon Mothma defected from the Senate and openly allying herself with the Rebellion. Canonically, it all makes sense that she was the leader of the Rebellion at that time.”

Powell: Were there any darlings that ended up getting killed in the second iteration of the script, or anything that you’d put in that you’d hoped would make it?

Whitta: “Yes. I’m doing a movie right now where that just happened, where I had to make a choice in the script to kill something that I love, but I did it because in killing it I gained something else that I thought was more valuable. Every time in Rogue One that we loved something, you have to kill your darlings. Sometimes you’ve got to make those tough choices. You lose something that you’re sad to see go, but you trade it for something that makes the movie even better.”

Powell: What was the most rewarding scene that you got to write in the script? Was there one that stood out for you, or was it the whole thing really?

Whitta: “Writing Vader. There was literally a moment when I got to the point and I’d written the first draft of the script in an office next door to Gareth, and when I got to the point where I got to type in the name Darth Vader, and write a line of his dialogue for the first time, I called Gareth into the room. ‘You’ve got to come see this. I’m writing Darth Vader’s dialogue.’ He came in and he was geeking out as well. Just little moments like that.”

“There are so many little things in the film that I can point to and say, ‘Oh, that was me,’ that I’m really proud of, but certainly even just the very presence of Vader in the film was something that, again, wasn’t initially in John’s draft. Gareth and I were sitting around and I said, ‘I feel like we need something that’s in the original films that is going to make this iconic.’ We were like, ‘Vader is taking the Death Star plans at the start of the original film. Doesn’t it make sense he would be in this film as well?’ We were able to get him into the film.”

Whitta: “Yeah, it was really hard. My wife would get to tell you some horror stories about how I was to live with during the period that I was working on this film. It’s partly that kind of excitement. When you’re writing, you’re constantly aware of you’re high-fiving your ten year old self the whole time you’re writing the movie, because it’s like you’re living the dream. At the same time, I’m an anxious person by nature, so I had terrible, terrible anxiety all the way through the film.”

“When it was first announced I was working on the film, I got a lot of messages on social media, and the most popular one was, ‘Dude, that’s amazing! That’s so great!’ And the second was ‘Don’t screw this up.’ Yeah. I guess that’s something that can happen.”

“Gareth and I would say, ‘Okay, we’re not going to be the people that screwed up Star Wars,’ so that is a monkey on your back that motivates you to do your best work constantly.”

Powell: Well, thank you very much for the time. I really appreciate it.

Powell: I’m looking forward to the Sherlock Holmes sequel, if that ends up being your next baby.

Whitta: “Me, too. I only did a week on the movie. I’ll be very, very interested to see what film eventually comes out of that project. We’ll see.”