Review: ‘The Bad Batch,’ a film by Ana Lily Amirpour 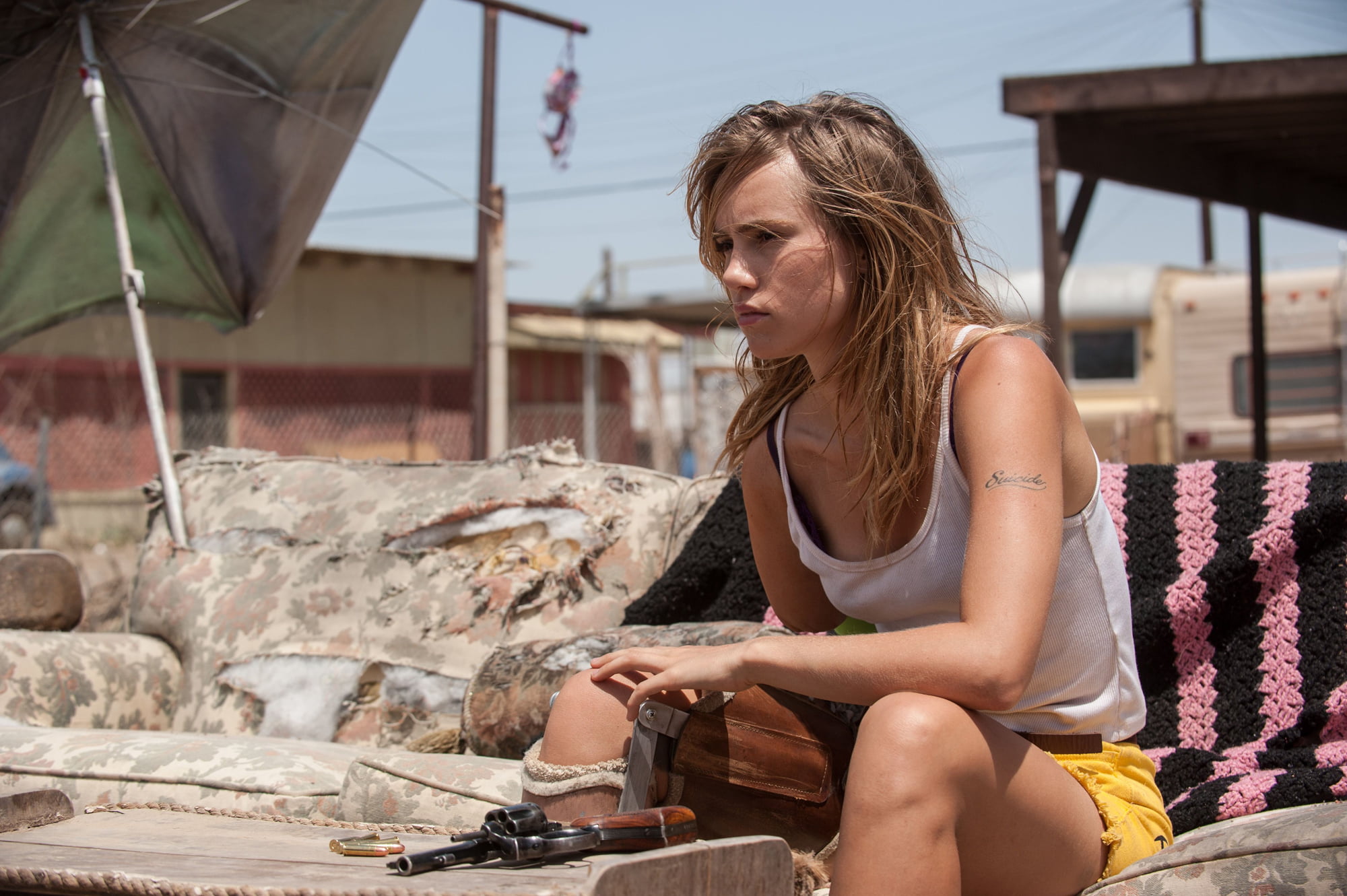 With her exceptionally produced and critically acclaimed debut feature, A Girl Walks Home Alone at Night, filmmaker Ana Lily Amirpour established herself a major talent to keep a watch on in the future. With her second film, the still sparse, but more visually ambitious post-apocalyptic drama The Bad Batch, many of Amirpour’s supporters will be left scratching their heads and wondering if the same filmmaker could have made both of these films. Sometimes, such a vast departure toward more artistically fruitful territory could be a good thing, but The Bad Batch proves to be one of those sophomore slumps where the vision and the imagination of the filmmaker doesn’t translate into much of anything moving or thoughtful.

In the future, all Americans deemed undesirable or “non-functioning members of society” – a.k.a. “bad batch prisoners” – are shipped off to an inhospitable, fenced in, no-mans-land in the Texas desert and stripped of their citizenship. The Bad Batch follows Arlen Johnson (Suki Waterhouse), a recently dropped off prisoner trying to navigate her sparse and arid surroundings. Not long after the cops drop her off, she’d captured and chained up by cannibals who lop off her right arm and right leg. She mounts an escape, begins crawling through the desert on a skateboard, is saved by a grungy, mute drifter with a shopping cart (Jim Carrey), and dropped off in the more idyllic hamlet of Comfort, a hedonistic community overseen by a drug dealing, hard-partying despot known as The Dream (Keanu Reeves). Unsure about her feelings towards Comfort, Arlen thinks about leaving. One day on a sojourn outside of Comfort’s fortified gates, she runs across one of her former cannibal captors and murders them. The woman Arlen kills was a mother, and the surviving child (Jayda Fink) is brought back to Comfort. The child is the daughter of hulking Cuban cannibal (Jason Momoa), who wants her back. After misplacing the child during a drug induced stupor and ending up in the desert with the kid’s dad, the pair form an uneasy alliance to reunite the broken family.

Amirpour unfurls The Bad Batch at a deliberate pace, never explaining this wasteland, and never fully needing to. What she does need to develop, however, is her characters and the film’s overall sense of purpose and worth. Aside from Momoa’s driven, caring, and contradictory father figure, Amirpour never allows any characters to flourish or develop. Everyone that populates the world of The Bad Batch is more or less a blank slate, so the decision to make Momoa’s Miami Man the only person with a degree of depth feels deliberate on a thematic level. The problem with making such an artistic decision is that Amirpour has to either double down to make everything as surreal as possible or find strong unifying story that can hold an audience’s interest. At first she attempts to do the former, and far too late into her second feature she tries to do the latter, and the results are a beguiling mess that forgets to introduce any clear subtext into an already surreal story. 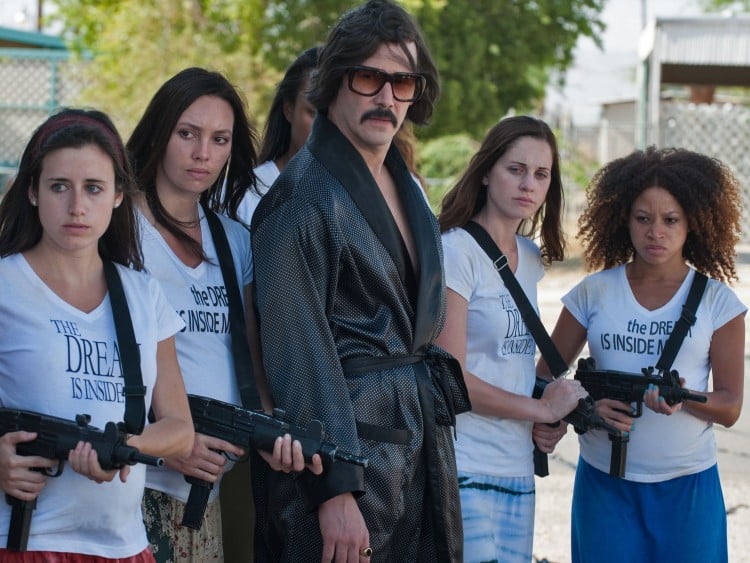 Unless you’re a fan of empty, florid, rigid visual formalism – think Tarkovsky without emotion, Kubrick without a script, or most appropriately the recent output of Nicolas Winding Refn – there’s little worthwhile about The Bad Batch. The slight, superfluous story is flimsy and unengaging. The characters aren’t bad or good enough to warrant following, let alone raising feelings of sympathy, empathy, or ire. Reeves and Momoa are doing what they can to inject some life into their roles, but nothing else here sticks. It’s also anchored by Waterhouse, and that’s one of Amirpour’s poorest decisions. There’s no dialogue for long spans of The Bad Batch, and it should have stayed that way in the case of Suki. Every time Waterhouse has to deliver a line of dialogue, her fake southern accent causes her to awkwardly pause every few words for some of the worst line readings of the year. The Bad Batch needs a confident centre, and Waterhouse emphatically isn’t it.

The only real joy to be found in The Bad Batch comes from wondering just how gorgeously photographed and production designed the next setting will be. Cinematographer Lyle Vincent, the art department, and Amirpour have packed their film with often colourful, occasionally bleak imagery. Amirpour has thought out every inch of every frame in The Bad Batch, and while that would be an admirable quality for most films, it runs counter to what would make her film successful. Lawless lands need to feel spontaneous, lively, and dangerous. The desert is a place where people can be seen coming from miles away, and Comfort is indistinguishable from spending a trippy, neon tinted weekend at Coachella (although, given the hellishness of their situation, perhaps the Fyre Festival is a better comparison). This world should come across like a place where anything can happen at any time, but it’s so stifling in its directorial approach that there’s little mystery to what’s going on.

Nothing happens in The Bad Batch without Amirpour wanting it to happen, but since there’s so little to latch onto here, the focus gets placed on the director’s list of technical talents and not what she’s actually able to do with them. The result is a film that’s formally accomplished but amateurish and juvenile in every other respect. After Arlen kills the mother of her young ward, she immediately and laughably cuts to shots of people at a skate park. Every ten to fifteen minutes (and even more frequently in the film’s early moments), Amirpour stops everything to mount pseudo-music videos to make the most of her unnecessarily stacked and hollow soundtrack. There’s also a decision in the film’s final third to create a climax where Arlen and The Dream will have to face off, but it feels shoehorned into the film. The Bad Batch would work better without a concrete ending rather than the one that has been forced into it here. A film built on slow burning ambiguity shouldn’t suddenly decide in its final moments that it needs to speed things up and tie every thread together in a hurry. Amirpour is a young filmmaker, and despite already making one accomplished film, The Bad Batch shows all the signs of a budding talent punching beyond their weight too quickly.

Shortly after Arlen arrives at Comfort, she comes across a raving hobo (Giovanni Ribisi) who says that the young woman will have to figure things out for herself and no one is going to tell her how to go about navigating these lands. It’s also clearly an admonishment of the audience, and fair play, I guess, for Amirpour being up-front about it. It’s just too bad that Amirpour has chosen to use a film with an admittedly great hook as a sort of demo reel to show off what she can do with a larger budget. There’s still a lot of promise for her future that can be glimpsed in fits and spurts throughout The Bad Batch, but this is proof that a great looking and intelligently composed film could still be bad. I’m still curious to see what she does next, and I hope that she retains the ambition that she brought to The Bad Batch, but let’s hope the next one is a bit more refined.

Check out the trailer for The Bad Batch: