Korean filmmaker Bong Joon Ho delivers another fantastical allegory with Okja, following similarly themed, but perhaps more action packed efforts like The Host and Snowpiercer. While those films were a lot darker and more relentless in their approach and aims, don’t let Okja’s overall gentility and flashes of kindness fool you. This is just as cutting, biting, and insightful as his previous works. It’s still not a subtle effort, and a lot of the messages can easily be seen on the film’s surface without much digging or unpacking, but that approach works well with Joon Ho’s tendency towards science fiction and the ethereal. And like all of his other films, it manoeuvres perfectly between being thrilling, hilarious, poignant, and gutting without missing a step. Had any other filmmaker made Okja, it probably would have been a mess, but Joon Ho remains one of the most gifted auteurs working anywhere in the world at the moment, delivering one of the best movies of the summer from some decidedly out-there material.

Chipper, but psychotic megacorporation CEO Lucy Mirando (Tilda Swinton) has a plan to solve the world food crisis: scientifically engineered “superpigs” (that look more like hippos crossed with large dogs than pigs) that can hopefully be farmed and slaughtered for delicious slabs of affordable GMO meat. She sends the genetically modified babies off to farms around the world to grow and fatten up for ten years. One of the caretakers of such an animal is Mija (Ahn Seo-Hyun), a young woman living with her greedy grandfather in the mountains of South Korea. Mija sees Okja, her “superpig,” as her best friend, so naturally she’s taken aback when Mirando sends a fallen-from-grace kid’s nature show host (Jake Gyllenhaal) to bring the animal back to New York City for a battery of tests and to be paraded around to the public in the Best Superpig Festival. Mija tracks Okja and tries to save her friend from becoming sausages, aided along the way by the efforts of the A.L.F., an animal liberation organization (led by Paul Dano, Steven Yuen, and Lily Collins) fraught with conflicting ideologies and an uneasy connection to their own self-interests.

Okja, written by Joon Ho and journalist/screenwriter Jon Ronson (The Men who Stare at Goats, Frank), sounds on paper like  satire revolving around human animal relations. It’s definitely that, but it’s also a screed against all forms of corporate culture (including optics driven activism) and how people in positions of power often differ wildly in their competitiveness. Most importantly and poignantly, however, Okja is about the people (and animals) often caught in the crossfire of a world where people routinely overreact and make knee jerk decisions. Mija is the only character in Joon Ho’s film guided by a true sense of love, but that love is also depicted as a uniquely singular and sometimes dangerous view despite always being in the right. Everyone else here is guided by a desire for power, notoriety, or the promise of a better life. A lot of Joon Ho and Ronson’s points are pretty easy to spot, but they fit together nicely as parts of a chaotic puzzle. 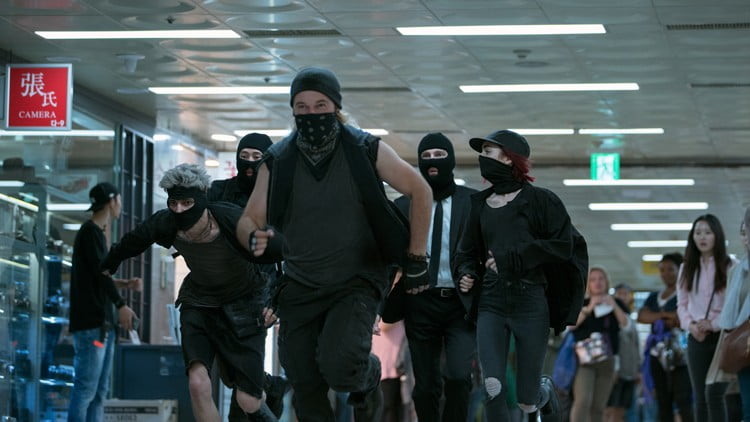 Like many of his previous films, Joon Ho bounces back and forth between character beats, silly slapstick and parody for some hearty laughs, darkly horrific moments where villains make unconscionable choices, and impressive large scale action sequences (especially a lengthy early chase where Mija attempts to rescue Okja from a pen in Seoul before the animal’s trip to the United States). All of it looks and sounds phenomenal, with cinematographer Darius Khondji capturing every ounce of his writer-director’s inspired craziness, and the effects department has constructed an impressive looking and moving creature worthy of audience sympathy. Okja has a lot of moving parts and points of view to cover, but Joon Ho has proven his mastery over balancing the topical, emotional, and visceral. The latter two traits means that the topical stuff isn’t subtle, but it does mean that Okja is a thoughtful, moving, and riotous thrill ride that never flags in energy and creativity.

Seo-Hyun and Dano get to play likable, but flawed people with the best of intentions, and both performances are notable in how they bring subtlety to an otherwise purposefully unsubtle work, but this remains a film that belongs to the outlandish, scenery chewing villains. Swinton (who has a dual role, also playing Lucy’s even scarier twin sister) once again proves to be a frightening comedic force like she did in Snowpiercer, and moments where Mirando interacts with her inner circle of cronies (including Giancarlo Esposito as a close advisor and Shirley Henderson as a motor-mouthed personal assistant) are some of the film’s biggest highlights. 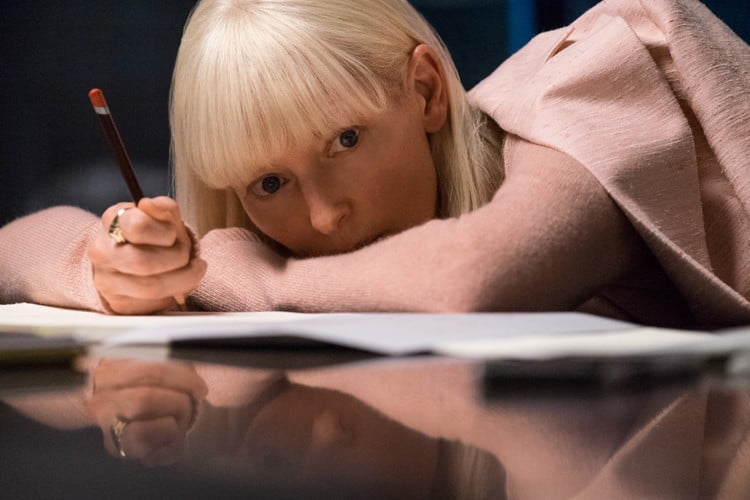 The biggest surprise here, however, is Gyllenhaal, who goes so stratospherically over-the-top that he manages to be the most unhinged presence in a film that already features Tilda Swinton as a villain. Simultaneously channeling Groucho Marx, Rip Taylor, and professional wrestler Dalton Castle, Gyllenhaal’s performance here is high camp for the ages and unlike anything the actor has even attempted since the maligned comedy Bubble Boy. He throws all manner of good taste and restraint to the wind, and the results are gloriously entertaining.

Okja might stumble a bit once the film gets around to its bittersweet and somewhat predictable conclusion, but that doesn’t dampen the fun, emotional impact, or intellectual weight of what Joon Ho has tried to accomplish here. It’s a bit rough around the edges at times, but those sharp corners feel purposeful and by design. One thing is for certain, though: there’s definitely not another film like this out there, and divisive though it may be, it’s efforts are assuredly appreciated.

Ojka premieres on Netflix and opens at theatres in select cities – including in Toronto at TIFF Bell Lightbox – on Wednesday, June 28, 2017.

Check out the trailer for Okja: