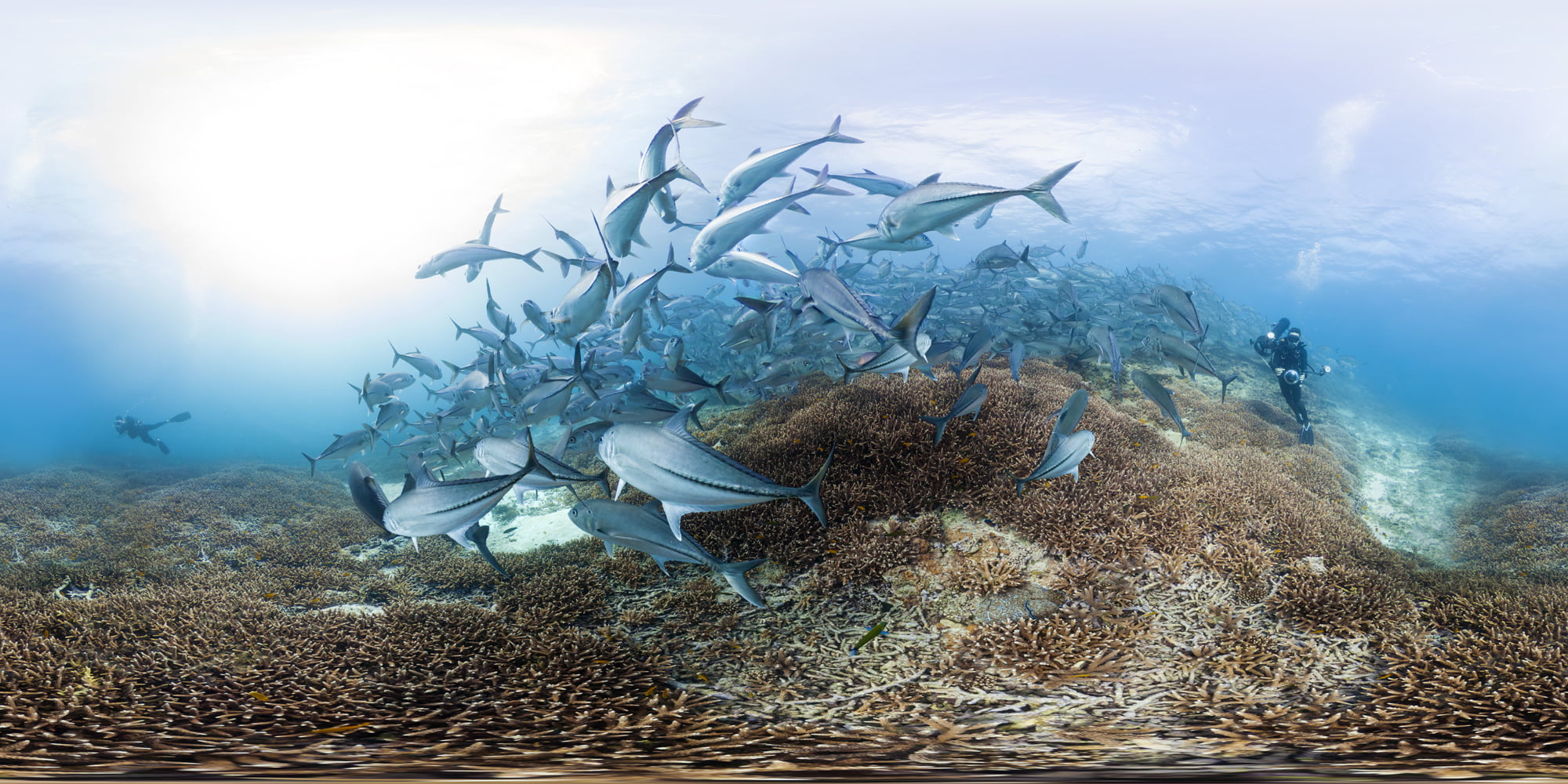 The film Chasing Coral, one of the best and most important documentaries of 2017, contains within it one of the saddest, most emotionally devastating moments of any movie this year. Self-professed “coral nerd” and camera technician Zackery Rago jumped at the chance to join the team of filmmaker Jeff Orlowski (Chasing Ice) and The Ocean Agency founder and CEO Richard Vevers in their quest to document the “bleaching” and dying off of precious, ecosystem dependent coral reefs around the world. One of Colorado native Rago’s biggest childhood dreams was to visit Australia’s fabled Great Barrier Reef and take a look at the complex, misunderstood organisms he adored up close and in their natural habitat. Rago is given that chance when Orlowski asks for his help in a gruelling months long attempt to capture the dying of coral via painstaking, manually performed time lapse photography. When the plane bringing Zackery and the film crew makes its final approach into Australia, the young man is thrilled at what he might get to experience. By the last day of filming, Rago is reduced to tears and a quivering voice that admits that he’s miserable now after having witnessed so much death on such a large scale. That one moment of palpable disappointment and depression on Zackary’s face reduced me to more tears than any film – fictional or documentary – this year.

Coral is, admittedly, a hard thing to get people to care about or get emotionally invested in, but Orlowski, Vevers (a former ad man turned advocate with his own personal love of oceanic life), and Rago have found a potent way to make viewers rise up and take immediate notice of why these creatures are so important and endangered. Most landlocked young people who don’t grow up regularly scuba diving or in any sort of warm, oceanic climate probably only know coral as something that’s already white and brittle; this thing that looks like a porous, over-hardened sponge that you used to get in science centre gift shops. That’s not coral, but rather the skeleton of a dead creature. When viewed up close, living coral is a diverse, complex, beautiful, vibrant and fascinating organism that comes in all shapes, sizes, and species. Often incorrectly identified as plants (despite plant-like tendencies), coral provides food not only for other undersea animals, but also for itself. It provides shelter and protection for animals in need, and it protects human beings along coastlines from massive wakes and storm surges. To say that coral is essential to oceanic life is an understatement.

One of the most troubling by-products of global warming and climate change is that coral has begun to “bleach” en masse, meaning their means of producing food for themselves and other animals has slowly stopped. The coral loses its colour to a point where it’s all white skeletal structure is visible through its now translucent flesh before finally dying. The reason for the decrease in coral around the world (which started in the 1980s) is the rising temperature of the world’s oceans by a couple of degrees every year. As Vevers astutely puts it in Chasing Coral, it doesn’t sound like much, but humans can liken it to the razor thin difference between a healthy body temperature and an incapacitating fever. The ocean, much like the human body, can’t survive if temperatures increase one or two degrees every year. At the current rate of temperature increase, all coral around the world will be dead in approximately twenty-five years – an entire class of animals wiped out in our lifetime that we can’t live without.

It’s frightening to think while watching Chasing Coral that most of these reefs and outcroppings have reached a point of no return, and no amount of advocacy can bring them back to life. What emerges has the potency and immediacy of a real life, race-against-the-clock thriller. Orlowski and his team of experts don’t posit or hypothesize what a life without coral would be like because they have made a film where such things are too frightening to comprehend. It’s the kind of documentary that has well researched facts and science on its side, but it finds ways of making people invest and care for the people trying to document something that’s almost impossible to make outside eyes understand. 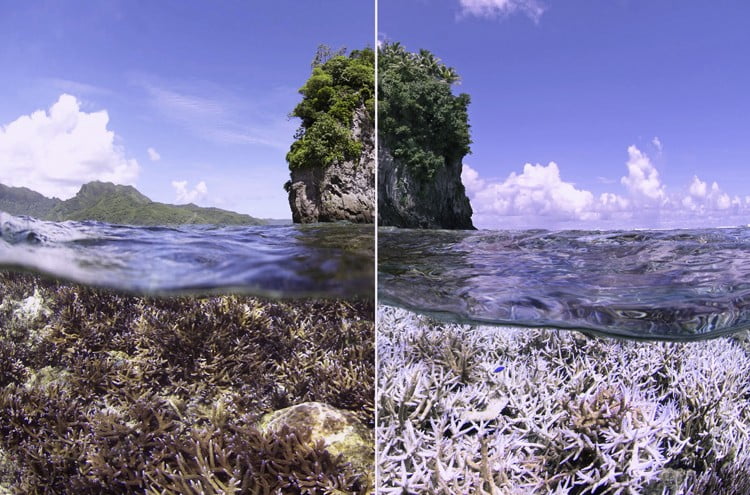 Next to being a disarmingly emotional piece of environmental advocacy filmmaking, Chasing Coral is also a massive technical and visual achievement. To document the slow dying of coral, Orlowski, Rago, and their team are forced to come up with elaborate, never-before-constructed time-lapse camera systems that are capable of staying dry, able to record for months on end in some of the world’s most volatile climates, can stand up to the massive pressure of the ocean bearing down upon it, and they have to have an intermittent wiper blade that can keep the image clear, usable, and irrefutable.

The passion of Orlowski’s team speaks volumes because almost nothing they attempt goes according to plan, and Chasing Coral boldly shows the stressful set-backs the project faced. From nearly not being able to bring the camera on a flight because it was too heavy, to waterlogged equipment, to faulty camera focuses, to putting cameras in less than ideal locations, to finally showing the gruelling decision to film everything manually, Orlowski never shies away from showing the lengthy process of trial and error that went into Chasing Coral’s construction.

This warts-and-all viewpoint only deepens personal investment in the project on the part of the viewer. We can see the team’s unbridled enthusiasm and determination when it comes to documenting something no single person could have ever hoped to do on their own. To see the damage caused by climate change in these locales requires a lot of work, and Orlowski (who had a relatively easier time documenting the effects of climate change on melting glaciers in his previous film) and his team do just that without demanding recognition for what they have done. Their story is an inspirational and moving one, while their findings are depressing and eye opening. The work that has been done here is invaluable. Their efforts have been tireless and true of heart.

As a work of cinema, Chasing Coral is ambitious and unprecedented. As a work of advocacy, it has the power to open eyes and make people at least try to save something that we frighteningly might have done too much damage to already. It’s also a film that isn’t afraid of making its advocacy into a personal crusade for the people involved, but it does so without being hokey, preachy, maudlin, or sentimental. It’s honest, unflinching, and unabashed in how it depicts coral as an unseen force that should unite us all. It’s also one of the most unmissable films of the year.

Check out the trailer for Chasing Coral: