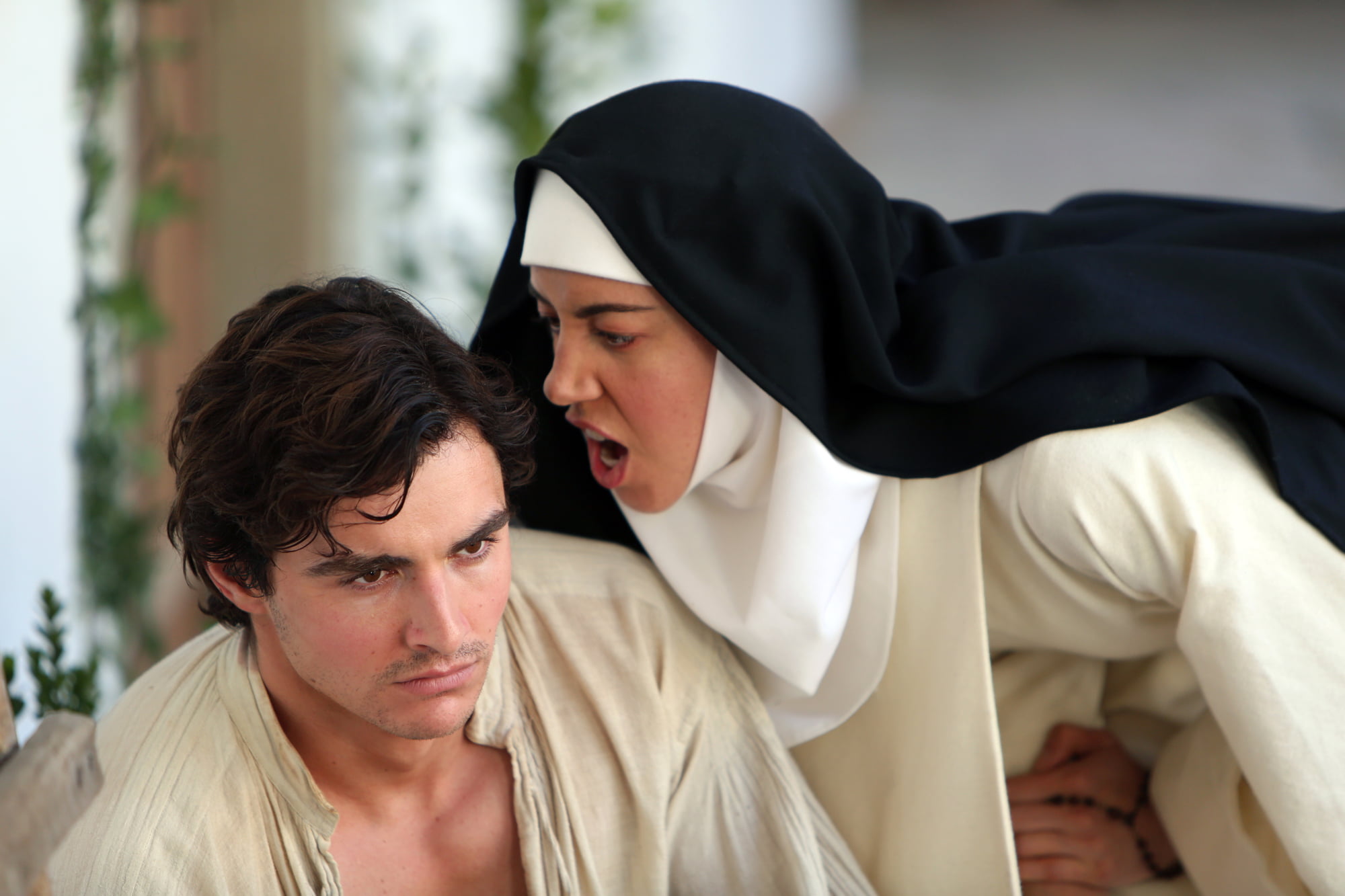 The idea of blending the 14th century bawdiness and morality tales of Boccaccio’s The Decameron with modern day potty mouthed deadpan comedy sounds like the potential recipe for a disastrously dry experiment in bad taste, but writer-director Jeff Baena’s The Little Hours instead strikes as a welcome, if somewhat uneven novelty. It’s strange, lightweight, and assuredly not to all tastes, but its unique set of sensibilities and influences are worth appreciating.

The year is 1347 and Massetto (Dave Franco) has been forced to flee his job as a servant after being caught canoodling with the wife of his constantly complaining and apopleptic boss (Nick Offerman, stealing his handful of scenes). Fearing for his life and in need of a place to hide, Massetto happens into a mutually beneficial relationship with ineffective man of the cloth Father Tommasso (John C. Reilly). The good father needs a groundskeeper and handyman at the convent he oversees with Sister Marea (Molly Shannon) to replace the one who quit in a huff after being berated, bullied, and pushed too far by a trio of less than holy nuns (Alison Brie, Aubrey Plaza, and Kate Micucci). Massetto is told by Tommasso to pretend that he’s deaf and mute to avoid communicating with the girls, but when each of the girls begins to make wildly differing sexual advances on him, Massetto’s vow of silence becomes increasingly harder.

While Franco is quite good as the imperfect, problematic, and somewhat sympathetic lead, Baena (Life After Beth) places the correct emphasis throughout The Little Hours on the interplay between his three female leads, each of whom has been cast and utilized perfectly. Brie’s depressed and longing Alessandra wants to be wed and leave the convent behind, but her stingy father (Paul Reiser) doesn’t want to pay a dowry so she can take a husband. Plaza’s sneaky and cunning Fernanda pursues Massetto with the most sexual vigour, but for the least romantic reasons. Micucci’s Ginerva is a worrisome tattletale and brownnoser, but she’s also craving acceptance from both of her heavenly sisters.

Brie excels at seeming bewildered, keen, and likable, even when her character is as selfish as the one she has been given here. Plaza’s ability to cut someone down to size with a terse profanity or death glare gets put to great comic use throughout. Micucci balances her characters sense of innocence and craziness expertly until the film’s bonkers climax and her performance becomes a phenomenal piece of physical comedy. Not everything in The Little Hours will elicit bellowing guffaws from the audience (not that it’s necessarily designed to), but these three woman contain the perfect amount of magnetic attraction to hold Baena’s narrative experiment together. 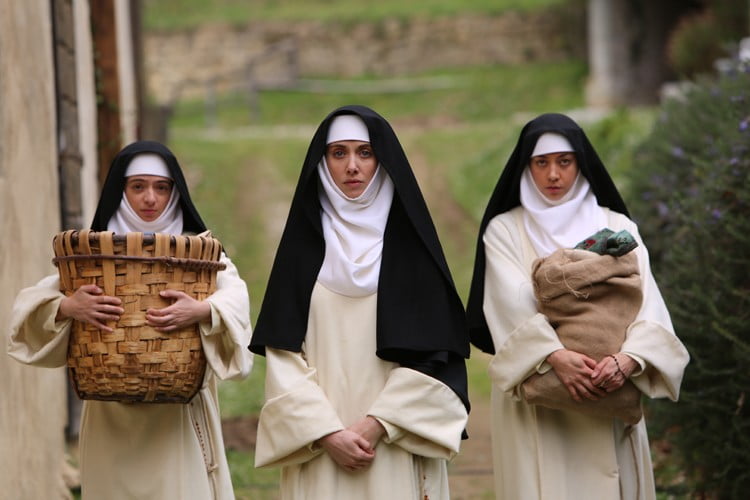 Baena doesn’t have his characters speak in ye olde English, but rather in modern cadence designed to feel somewhat out of step with his modestly mounted period trappings. In the hands of a lesser writer, The Little Hours could have rung hollow and false, and while not every gag or one-liner lands successfully, Baena’s background as a student of medieval and renaissance studies shows through. The Little Hours plays best if viewed as a Mad Magazine version of a volume of Boccaccio Cliff Notes. Baena pays Boccaccio just enough reverence to do the Italian writer’s work justice, but never too much that the comedic sensibilities of the cast and screenplay are misused or stunted. Some of the jokes will strike as problematic or offensive by modern standards of decorum and political correctness, but by using his choice of text in a post-modern fashion such as this, Baena has found a way to delightfully recontextualize an outdated tale.

It’s also nice to watch a modern comedy that has been thoroughly scripted for a change. It doesn’t sound like much, but with The Little Hours there’s a distinct sense that the actors and filmmakers put a lot of thought into what was being said and how those lines were being delivered rather than trying to improvise a bunch of nonsense that might not have worked. The reactions of the actors feel lively, spontaneous, and natural, but the dialogue has been carefully crafted by Baena to stay true to the story at hand. In an age where most bawdy comedies fall into a “line-o-rama” pool of flop sweat, it’s nice to see something that actually cares about words on a page instead of a cast’s ability to show off at every turn. The Little Hours certainly has a talented enough cast if it wanted to coast, but thankfully it has been made with a lot more intelligence than most transgressive comedies can muster.

The Little Hours opens in Toronto at TIFF Bell Lightbox and in Vancouver on Friday, July 14, 2017. It opens on August 11th in Montreal and throughout the summer in select Canadian cities.

Check out the trailer for The Little Hours: