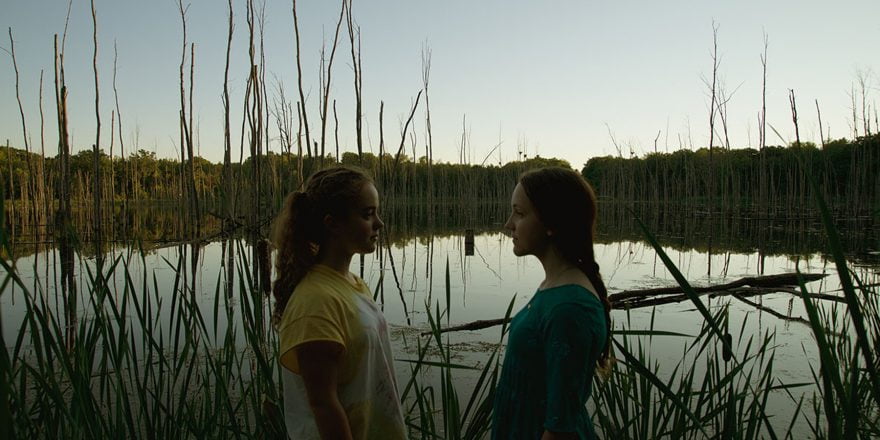 For her sixth feature film, director, writer, producer, actor and all around DIY Jill-of-all-trades Ingrid Veninger takes filmgoers to Porcupine Lake (set to make its world premiere at the Toronto International Film Festival this week). A unique coming-of-age story from one of Canada’s most resolutely independent filmmakers, the latest from Veninger (MODRA, The Animal Project) represents both a departure for her cinematically and a telling of one of her most personal stories to date.

12-year old Bea (newcomer Charlotte Salisbury) is headed to Ontario’s cottage country with her mother (Delphine Roussel) to spend the summer with her snack shack owning father (Christopher Bolton). With her parents’ tenuous relationship on the verge of an outright divorce and only her dog Callum to call her friend, Bea pines for a less boring summer. She finds excitement in the form of Kate (Lucinda Armstrong Hall), a girl of the same age who lives year-round in town with her chaotic family. The pair immediately hit it off despite Kate being a lot more worldly and aggressive and Bea remaining reserved and shy. The best friendship evolves into something a bit deeper and more experimental, but external influences could make Bea and Kate’s relationship into something more complicated than they could ever hope to understand at such a young age.

Shot in Port Severn, Veninger’s latest and, by her own admission, most scripted effort to date, Porcupine Lake is an ode to blossoming feelings and yearnings in pre-teens, and we caught up with Veninger on at late August afternoon at The Pilot in Toronto to talk about how it all came to be.

You had this idea before your last film, He Hated Pigeons, but it kinda got put on hold for a bit. So what was it that made you want to come back to Porcupine Lake now?

Ingrid Veninger: It was because I was invited to a writer’s retreat called Hedgebrook on Whitby Island in Washington, and I needed to submit something, and in order to apply you needed to have a first draft. The only first draft that I had ready was Porcupine Lake, so I submitted it, and it got in. Outside of the pUNK Films lab, I had never done a writer’s retreat. It was myself and four other American writers who are full-fledged screenwriters in their own right, and two mentors – Jane Anderson, who had just won an Emmy for Olive Kitteridge, and Jenny Bicks, who has a whole host of credits as a showrunner, writer, and producer.

I got in, and I just thought that I was going to practice the craft of screenwriting with this mentorship and in this environment, but I never knew that I was going to make Porcupine Lake because this was still just a writing exercise. Through the process, I never opened my laptop. I was just index carding everything, taking apart the third act, walking around inside these characters, and I was basically told that everybody at the retreat wanted to see the film, and it was then that I committed to making it. I just said that when I got back to Toronto I was going to start raising funds, and I pledged to shoot the film the next summer. After that, it was on! (laughs) It was really just a case of people wanting to see it that made me want to make it.

As filmmakers, or maybe just me personally, we’re often told that the “coming-of-age” genre is a “soft genre.” We’re inundated with coming-of-age films, and we’re told they’re tough sells that fall between adult and teen audiences. Who are they for, really? Are they for adults who want to be nostalgic through a film? Is it speaking directly to a young audience? Will it survive a commercial release beyond festivals? I was thinking with my producer’s hat on that I had explored this territory in the past, and I was really beginning to wonder if I was treading the same waters. What could I do differently? How could I do it? Why did I want to make this film? What is the challenge in this for me? How will I grow and learn more as a filmmaker through making this?

These were all the things I was checking off in my mind, and what I felt, ultimately, was that after I had been going to all these LGBT film festivals with He Hated Pigeons, I had been seeing a lot of love stories that take place between young women, but they were always about people in their teens. They were never about 12 or 13 year olds. They were never about these characters that were on the cusp of adolescence. It was always about slightly older people, and these films that I had been watching were always falling into clichés: straight girl and queer girl. It always felt like territory that never reflected my experience, necessarily.

I wanted to tell something that was true to my own experience. I had my first kiss with a girl, and I think a lot of girls around the age of 12 or 13 might have done the same. I was always told when I was shopping this idea around that I would have to cast older actors to play younger people. I was told that actually casting 12 or 13 year olds to play their first kiss together on screen was going to be very, very tricky. It’s sensitive material, and everyone said that I would have to change that. Certainly, within the pUNK Films lab I was encouraged, but within the market I was very discouraged until I hit Hedgebrook. Once I had that encouragement, I knew that I would have to do it and that it was going to be from the heart. It wasn’t going to be a sex trip or a thriller or something that I think a lot of people in the marketplace wished it would turn it into. This was always going to be a heart trip, and it was going to be complicated because those feelings in the heart at 12 and 13 years old are complicated. 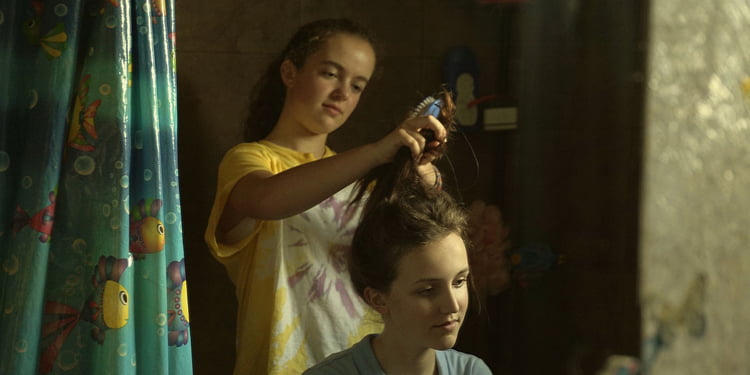 Ingrid Veninger: You just hit the very core of it. It’s that dynamic that flips with age, and you wonder what brings these two people together. That dynamic and how that can be intimate and especially fragile when you’re that age and starting to form your own identity outside of your family for pretty much the first time is something that I’ve always been fascinated with. This is kind of story about the people who are influential on you and how you carry that forward into your life as a teen and an adult. It’s about how these girls are shaping each other with feelings that they haven’t even fully unpacked yet that was really interested in.

I relate very much to Bea, but I also know that I was Kate. After being at camp with older girls teaching me all about using tampons and freaking me out about how much blood comes out of you for fifty years, I immediately understood those feelings. But as soon as I got all that information, I wanted to impart it in the same way that Kate does when I got back to school. I flipped from someone shy into someone dominant, and that’s something that kept flipping and flopping as I was growing up and growing older. Even the adults and teens in this film are going through their own stuff, and their experiences are paralleling the young girls. These young girls are absorbing all of that and making their choices, fumbling around in the dark about who they want to be, and the parents and teens have no clue what’s going on with these girls, and I think the kids have more of a clue what’s going on with the parents than anyone figures out.

As this is all spinning around, you have this story of Bea, who in her heart just doesn’t want to have another boring summer. She wants a friend outside of her dog, and Kate’s world represents something so foreign and exciting. Kate has a hectic, chaotic life, and that’s completely unlike Bea’s world, and while Bea doesn’t understand it all, it’s also very attractive. Navigating all that was interesting to write and play with. As much as there’s this fear of the unknown, there’s this attraction and allure, and you just hope that it doesn’t become too dangerous. As a parent, that’s the time where you have to start letting go of your kids little by little, and that’s terrifying. Kids have to start letting go of their parents, and that’s also terrifying. You just hope to get through, learn something, and hope that the choices made don’t lead to any permanent damage. There’s this duality between attraction and fear that defines us, and that’s something I wanted to explore through the kids and adults and all of the relationships in the film.

You make your films in a very hands-on, family oriented sort of way, but what’s it like making a film like Porcupine Lake in an area where you can remove yourself from any sort of external noise and just focus on the story and characters?

Ingrid Veninger: My ultimate goal is total immersion, and that everyone on the film lives and breathes the film 24/7. I know that’s a lot to ask, and I know that’s not for everybody. I banned cell phones from my sets from my last four feature films, so that’s something that I guess Christopher Nolan and I have going on together. (laughs) I want everyone to be all-in.

Shooting up north in Port Severn, the entire cast and crew were living together in cabins and eating together every day. We had circles around the table where everyone would share a word of the day. We would wake up together, and we’re all in each other’s business all the time, and that’s fantastic for me. It’s not only about building a family, but it’s also about containing the experience. I can control that a lot more when we’re all together as opposed to people who just come in for the day and check out to go back to their families and their homes. I don’t know what happens in that 12 hour period. They can change, have fights with their loved ones, and all of these external factors can fall on their heads, but they come back the next day completely different. When it’s all immersive and we’re at “camp film,” I know where everybody has been and I can hold that. Crafting an atmosphere once you have your cast and crew is one of the biggest jobs and challenges that I have as a director on a shoot. My films are low budget, and I never know how they’re going to turn out, and they’re all very process driven, but this one of all my films was the most script-based with very little deviation although I was prepared to at any time. I can’t guarantee anything about my films beyond the fact that the experience is going to have value.

Porcupine Lake makes its world premiere at the 2017 Toronto International Film Festival on Sunday, September 10. It screens again on Thursday, September 14 and Friday, September 15. It will be distributed in Canada by FilmsWeLike.