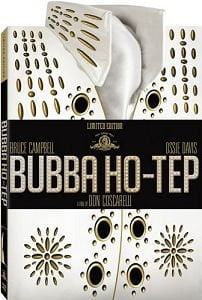 Frank Miller’s 300 came out on DVD and Blu-ray last Tuesday but with only a few hot titles coming out this week it’s still the hottest title out on store shelves. That is, unless you’re interested in a very off-the-wall adventure that stars Bruce Campbell as an aging Elvis trying to destroy an ancient Mummy that’s preying on a retirement home in Texas.

Bubba Ho-Tep has been available on DVD for a couple of years now but it’s remained a fairly Indie hit despite the stellar cast, hilarious script, and all too enjoyable catch phrases. This re-issue features all the original content that came on the first DVD, including two new commentaries from director Don Coscarelli and Campbell, but it also comes with new packaging featuring a wrap-around Elvis shirt. Well worth checking out for anyone who loved Campbell in the Evil Dead films.

The other hot title is director D.J. Caruso‘s Disturbia. The surprise hit of the spring, Disturbia stars Shia LaBeouf (now of Transformers fame) as Kale, a reckless teenager who discovers a series of murders in his own neighbourhood after he’s placed under house arrest and begins spying on the neighbours. The always creepy David Morse co-stars as Mr. Turner.

For the kids there’s TMNT – as in Teenage Mutant Ninja Turtles. Starring the voices of Chris Evans, Sarah Michelle Gellar, Kevin Smith, and Patrick Stewart, to name just a few, this animated film continues the tale of those crazy mutated turtles as they try to protect New York City from evil. It’s cheesy, and liable to drive parents nuts, but it will keep the kids busy for 87 minutes.

True Elvis fans might also want to keep an eye out for Warners’s re-issues of a few of his classics, including Viva Las Vegas, Jailhouse Rock, and Kissin’ Cousins.

On the television front, new DVD sets available this week include the second season of HBO’s popular series Rome, season two of the classic Muppet Show, The Simpsons season ten, and one of my favorites, season two of the zany misadventures of The Tick.