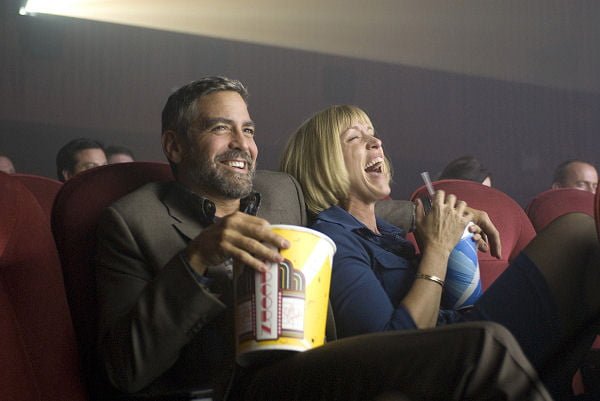 George Clooney and Frances McDormand in Burn After Reading

Burn After Reading
As a filmmaker, how could anyone follow up the wildly applauded genius of No Country For Old Men? Perhaps wisely, Joel and Ethan Coen’s latest film is so far out in left field that it’s hard to imagine a similarity between the films. The problem for the Coen’s, and perhaps even for audiences, is that after a film like No Country, how do you not compare subsequent films, even if the latest resembles their Hudsucker Proxy more than it resembles No Country For Old Men?

Brad Pitt and Frances McDormand star as gym staff who stumble onto the supposedly secret files of CIA agent Osbourne Cox, played by John Malkovich. As the two try to extort money from the agent, who recently quit his job, Osbourne is dealing with his cheating wife, played by Tilda Swinton, who is having an affair with a former security agent, played by George Clooney.

The problem is that, as one of the Coen’s farces, Burn After Reading is a tough sell to anyone who dove into the rich story and characters in No Country. The best thing about the film is also Pitt, who spends far too little time on screen, and gets washed away in a flood of Malkovich’s obscenities, while Clooney does his best with a rather purposeless character.

The miraculous thing about Burn After Reading, perhaps much like some of the Coen’s other films, is that while the first quarter of the film feels slapped together, the ending is practically a farcical sonata of resonating plot points. The story still has no deep power, but it’s at least tied up with a nice bow and a little message about human nature, government agencies, and perhaps most importantly, how humanity is destined to repeat the same mistakes.

The Mummy: Tomb Of The Dragon Emperor
Every Mummy sequel leaves me feeling a little conflicted. On the one hand, previous Mummy director Stephen Sommers has stepped aside to let Rob Cohen step up to bat. He’s the director responsible for bad films like Stealth and The Fast and the Furious. Maybe the worst part of all, Rachel Weisz has also stepped aside, letting another actress step in as Brendan Fraser‘s main squeeze.

All this has its effect on the film, but I will admit the story is not without its charm. Jet Li plays the evil Han Emperor, Maria Bello co-stars, and Spider-Man 2 scribes Alfred Gough and Miles Millar wrote the script. (Not to mention that Cohen gets at least some of my adoration for directing Dragonheart a number of years ago.)

As the title already suggests, this time out mummy-fighter Rick O’Connell (Fraser), his wife (Bello), and son (Luke Ford) are in China when they awake the Dragon Emperor and his army of terra cotta soldiers. After being cursed 2000 years ago by a sorceress, the Emperor has his eyes set on restoring his army so he can plot world domination, and apparently only the O’Connell clan can stop him.

The Mummy franchise is a lot of fun, and despite some cheapo effects now and then, this is a fun little throwaway adventure. Don’t give it too much thought, just plant yourself on a couch for a couple of hours and enjoy the utterly enjoyable nonsense.

Mamma Mia!
For the Abba fans out there, Meryl Streep stars in the film adaptation of the stage hit Mamma Mia! With Pierce Brosnan, Colin Firth, Stellan Skarsgård in the roles of the three men she once loved, Streep plays Donna, a single mother preparing for her daughters wedding. But Sophie, played by Amanda Seyfried, wants to meet her father and invites the three possible dads to the wedding, without her mother’s knowledge.

Bringing together some of Abba’s greatest hits, the musical was a hit on stage, but apparently the film adaptation does little to bring the story to life. Ella Taylor of L.A. Weekly called the film “A collection of droopy ditties draped around a threadbare plot,” while many critics are giving it failing grades.

Whereas the original film was not only campy, but also offered a political commentary on violence, it’s safe to say the new film is all about the carnage. It’s not a bad action film, and Statham fans will enjoy his usual bad boy attitude, but it’s nothing more than an average action film otherwise.

The House Bunny
I adore Anna Faris, despite all of her bad movies, but there is just no way to say anything good about The House Bunny.

Old School [Blu-ray]
And finally, the very likeable Luke Wilson stars in Old School as a businessman who finds himself thrust back into the single life. With the help of his party-animal buddies, played by Will Ferrell and Vince Vaughn, his new home gets turned into a frat house, complete with pledges and parties. But the boys will have to contend with the classic, evil dean of the university who has plans to wipe out the fun for the boys.

The question I have is why we need a blu-ray version of the film, and what’s so “unrated” about it? There is a little bit of nudity, including more of Will Ferrell than I wanted to see, but otherwise this is a pretty tame release. If you have a high definition TV, I suppose it’s worth picking up the blu-ray copy so you can at least enjoy Ferrell’s love handles in all their glory.