Review: ‘A Year in an English Garden: Flicker + Pulse’ 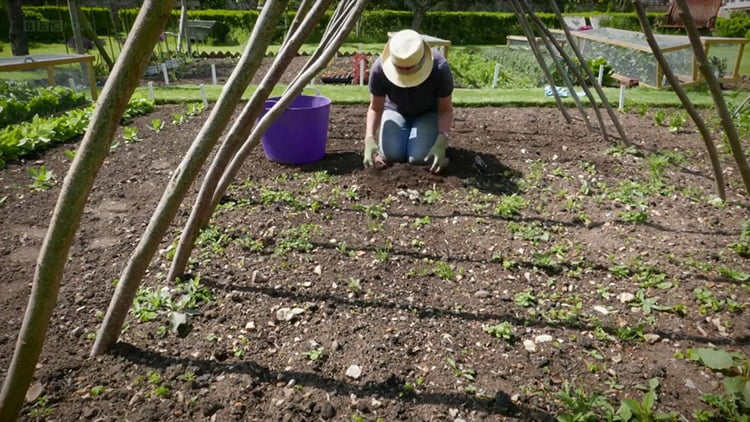 Brief, but captivating to the eyes and ears alike, the documentary A Year in an English Garden: Flicker + Pulse isn’t much more than the title suggests, but it should appeal to horticultural enthusiasts who look forward to the warmer weather that’s just around the corner.

Clocking in at just under an hour and originally produced for the BBC by Site-Eye Time-Lapse Films, Brian McClave and Tom Wichelow’s A Year in an English Garden: Flicker + Pulse utilizes state-of-the-art time lapse photography to document the seasonal changes that befall the sprawling and elaborate grounds at The Beeches, located in Barcombe, East Sussex. It’s a gorgeous eight acre, circa eighteenth century garden that requires year-round maintenance.

Starting in winter with frosted over branches and ending in the fall with a mass pressing of apples for cider in fall, A Year in an English Garden painstakingly documents the amount of natural and manmade work that goes into tending to such fruit, vegetable, and flower filled land. McClave and Wichelow’s cameras were there for every bit of tilling, turning, planting, composting, pruning, and harvesting, but they’re careful not to overwhelm the audience with too much minutiae that would turn this into an avant-garde work of slow cinema. The significance of this year round cycle of production and care is explained quite well through interviews with the keepers of the garden, which are heard over the images, but never framed in a talking head style. The significance of each season is explained, and the amount of hard work needed to maintain The Beeches is evident from the start.

The “flicker and pulse” of the title occurs quite naturally through McClave and Wichelow’s style of long-term time lapse cinematography, but even this naturally occurring stroboscopic effect requires the film to open with a viewer warning. Sped up to a point where day turns to night within seconds – distilling weeks of footage into mere moments – the wonders of the growing process are glimpsed from gestation to the completion of a life cycle. It’s stunning and trippy in equal measure; a nice visual reflection of the metaphorical microcosm of life, death, and rebirth that a garden can represent.

These images are set not only to the remarks of the gardeners, but also to a striking, often haunting musical score from Wendy Rae Fowler. Leaning a bit more industrial and earthy than orchestral, it makes A Year in an English Garden into something a lot more cinematic, immediate, and grander than the project’s television roots would suggest. Fowler’s score also syncs up nicely with Tim Howarth’s expertly mixed sound design, which captures every buzzing bee, chirping bird, and rustling wind with resounding clarity.

Overall, A Year in an English Garden is a thematically simplistic, but technically accomplished work that offers more visual and auditory delights than emotional swells or topical food for thought. Ultimately, it’s up to viewers to decide if they want to plunk down theatre prices to see the equivalent of flowers growing on a large screen with the best sound system possible. While I’m sure that’s not everyone’s cup of English Breakfast Tea, I can see the appeal for those who love their gardens and anyone who can’t wait for the slowly rising Toronto temperatures to reach their springtime peak.

A Year in an English Garden: Flicker + Pulse opens at The Hot Docs Ted Rogers Cinema on Friday, February 16, 2018.

Check out the trailer for A Year in an English Garden: Flicker + Pulse: