Boasting a duller, nastier wit than its predecessor and a newfound brush with sincerity, the adult oriented super-anti-hero sequel Deadpool 2 lacks the anarchic glee and spontaneity of its blockbuster predecessor, but it still has a lot to enjoy. Caught somewhere between mounting an amped up rehash of the first film and an underdeveloped attempt at doing something different with the catty, pop culture referencing, and not all that heroic “merc with a mouth,” Deadpool 2 feels simultaneously far more controlled from a storytelling standpoint and scatterbrained from a tonal perspective. It’s a mixed bag on the whole, but undiscerning fans of the first film likely won’t notice many differences.

Everyone’s favourite unkillable, foul mouthed burn victim, Wade Wilson (Ryan Reynolds, who also shares a screenwriting credit this time out), suffers a personal tragedy and spirals into a depression. Searching for some kind of meaning in his life, Wade, a.k.a. Deadpool, reluctantly offers his assistance to some of his X-Men buddies (at least the ones who’ll talk to him) to help capture an unruly mutant teenager named Russell (Julian Dennison), who can produce devastating fireballs from his hands and is travelling down a dark, potentially villainous moral path. Russell has attracted the attention of Cable (Josh Brolin), a time travelling, partially bionic bounty hunter, who has seen the young man’s future and decided to take the lad out before future devastation and death can occur. Initially unenthusiastic about protecting Russell, Wade gradually warms to the awkward, but equally rude and crude teen. Wade shields Russell from Cable’s relentless onslaught, thinking that he might be able to reason with the frightened and misguided teen.

Deadpool 2 director David Leitch (John Wick, Atomic Blonde) and returning screenwriters Paul Wernick and Rhett Reese follow the sequel production playbook to the letter. Rule one in that playbook is that everything has to be cranked to eleven at all times, and rule two states that “if it ain’t broke, don’t fix it.” Neither approach works, but the new additions to the Deadpool 2 universe offer a lot more substance and novelty than the familiar, reheated elements.

After an initial set-up that’s more of a comic send up of Leitch’s previous films than a Deadpool film, everything settles into a familiar groove. There will be plenty of inappropriately used, but instantly recognizable pop ditties to score the bloodshed and bawdiness. There’s an impressive, large scale car chase. The whole thing will build to a group schmozzle where even the underused side characters can show off their stuff while saving the day. The film’s true villain (Eddie Marsan’s evangelical, maniacal schoolmaster) barely factors into anything and is underdeveloped outside of being heinously sadistic and evil.

Leitch does a fine enough job containing it all, but almost every major set piece is just a riff on previously designed set pieces and beats from the last film (save for Reynolds and Dennison attempting to fight their way out of a supermax prison for mutants). It’s not that these sequences are bad or mounted without a sense of action-packed cleverness, but that they’re uninspired because they’ve been trotted out a second time with only minor tweaks to differentiate them. 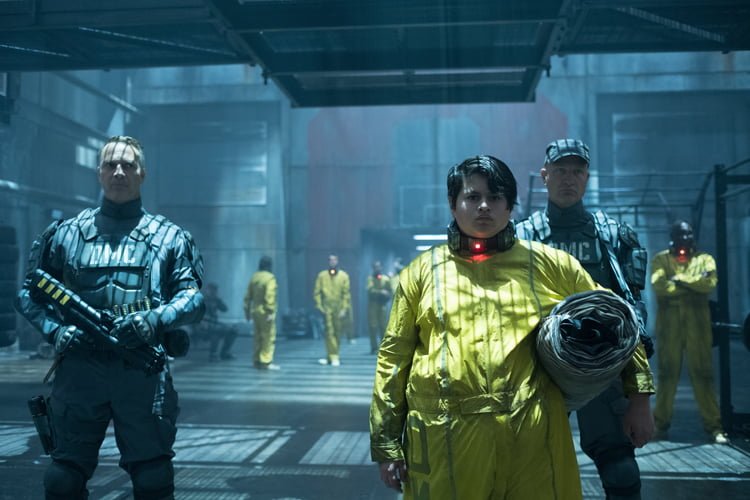 The jokes fall into the same category of familiarity, and while there are still plenty of genuine belly laughs and witty meta gags peppered throughout, the shine of Deadpool as a character has worn off considerably. After the first film, audiences will know exactly what to expect from Wade Wilson, and the punchlines becomes almost as predictable as the plotline. Some of that is a side effect of the character just spouting off witticisms like bullets in hopes that any of them will stick, but the amount of material the character has at his disposal is somewhat limited. Reynolds can sometimes get a laugh simply through his unrivaled way to turn the most banal of phrases into gold, but the hit to miss ratio skews slightly into the negative category here. It doesn’t help matters that Wernick, Reese, and Reynolds have subscribed to the idea that offering up meaner, edgier, and purposefully triggering jokes automatically makes things funnier and more bombastic. Again, like everything else here, sometimes it works, but mostly it doesn’t. Like many sequels, not much thought has been put into changing the mechanics of the main character and the film around it in favour of not tampering with a potentially lucrative brand.

The only tampering that has been done to Deadpool 2 is the film’s stealthiest and greatest asset. Instead of playing Wade’s backstory for laughs, Deadpool 2 allows the character to show some degree of vulnerability and weakness. At several points, Wade will snap out of his snarky wheelhouse and suddenly realize the severity of his situation, and it’s always well played here. There are also moments where the selfish anti-hero shows a genuine and heartfelt concern for those close to him. Sure, he’d just as soon kill everyone in the room so he could take care of business on his own, but the softening of Deadpool as a character offers a nifty, much needed wrinkle into a character that’s more or less portrayed as being unstoppable and purposefully annoying.

Reynolds can be a warm screen presence when called upon, and he displays it nicely here in scenes alongside the gruffly reliable Brolin, Dennison (who proves that his star making turn in Taika Waititi’s The Hunt for the Wilderpeople was no fluke), the CGI rendered Colossus (voice by Stefan Kapicic), or Morena Baccarin, who returns as Wade’s beloved. He’s also a generous enough performer to not hog all of the laughs, giving everyone else plenty to do regardless of screen time, especially Zazie Beetz, who effortlessly and coolly steals all of her scenes in the film’s action oriented second half as Domino, a mutant blessed with unbelievable luck. There’s a sense that Reynolds and company want everyone to have a good time, and while their definition of a good time might differ from everyone else’s, the film’s jovial nature is the only thing that makes Deadpool 2 feel like a lark rather than an assembly line studio film.

Maybe I’m reading into Deadpool 2 too strenuously, but I’m sure that everyone who thinks I’m some sort of academically minded buzzkill stopped reading after the opening sentence and looking at the star rating. I know that a film built around a fourth wall breaking character with a penchant for sex, scat, and snide jokes probably won’t reinvent the cinematic form, but judging by how unexpectedly successful the first film in this now solidified franchise was, it’s hard not to expect something more and different. Visually and mechanically, it’s basically the same film as the first one, which will please some and leave others wanting. It’s not a bad or a badly made movie by any stretch, but if it cut back on the nastiness in favour of fresher jokes and tried something new from an action standpoint, Deadpool 2 would have been a lot better.

Check out the trailer for Deadpool 2:

Yes…you are reading into Deadpool 2 too strenuously…much too strenuously. You are exactly missing the point. There is no big picture. The movie is quips and sight gags, using a comic as a premise, which passes for what could possibly be mistaken for a plot, if you’re on mushrooms.

The movie wasn’t ‘unexpectedly successful”, except by those who have forgotten why most people go to movies. Deadpool 1 exists because people knew it would be successful and clamored for it to be made. Of course 2 is basically the same as the first one. That’s what fans want from Deadpool…more Deadpool. Backstories, perfect sets, immaculate production…even plot, don’t matter nearly as much as excellent characters and dynamic dialogue…and that what Deadpool delivers in spades.

Deadpool is not, and doesn’t pretend to be, art…it’s entertainment. That at some time in the future people will get bored with the franchise and move on to something else, is as close to any actual point as Deadpool, will ever get. It’s making hay while the sun shines. It’s a fun and frivolous waste of time that has no bearing on real life and no message for the world, except…lighten up.

It’s a sugar and fat filled guilty pleasure that, at worst, will mean an extra helping of broccoli next week, and shouldn’t be taken any more seriously than that. There is no moral, message or deeper meaning. It employs age old tripes and gimmicks to manipulate the viewer’s emotions. The neat trick is that Deadpool tells you up front what it’s doing, making you complicit in the charade. Everybody who sees Deadpool does so with eyes wide open, completely in on the gag.

I know critics have an innate need to see deeper meaning…but there isn’t any depth to Deadpool…it’s all surface. It is truth in advertising. It is all facade and doesn’t pretend otherwise…and thank goodness for that. That’s why I and hundreds of millions of people watched Deadpool over and over…and will do the same for Deadpool 2.