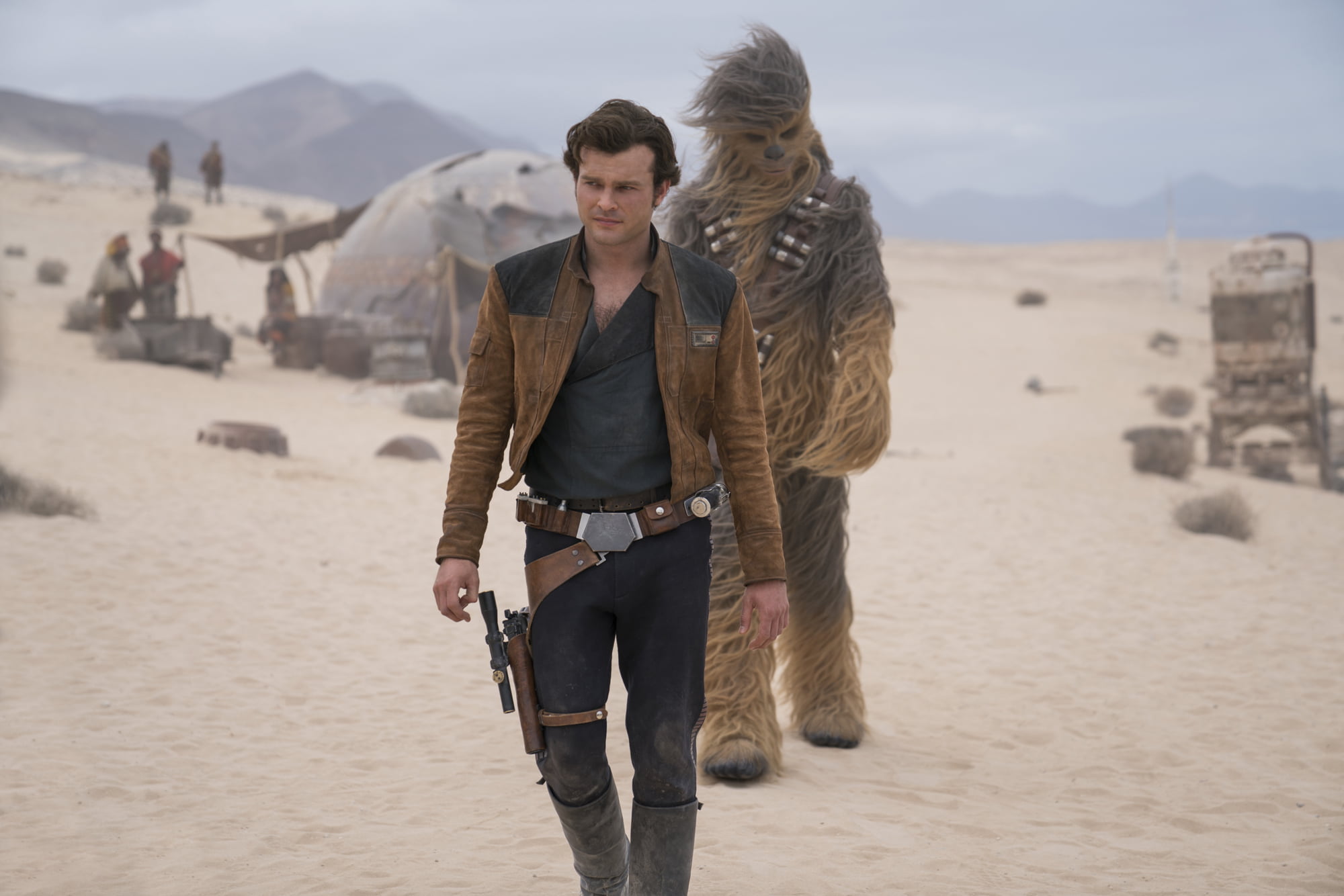 Although it’s probably unnecessary at this point, and it gets off to a rocky start, Solo: A Star Wars Story remains a likable, entertaining bit of Hollywood blockbuster silliness. Save for one key moment that won’t be spoiled here, director Ron Howard’s reportedly heavily retooled prequel about roguish man-about-the-galaxy Han Solo doesn’t move the Star Wars franchise forward or backward at all. Instead, it’s perfectly content functioning like one of the old school sci-fi and western serials that inspired George Lucas to create the series in the first place, and once the film gets around to easing up and relaxing a bit instead of trying to redefine a character who doesn’t need redefining, it’s a good humoured, action packed fun.

Young Han, played by Alden Ehrenreich, has escaped the clutches of some sort of slave/orphan/scavenger colony (honestly, I can’t spoil this because I can’t even explain what it is) with dreams of becoming a pilot and returning to his homeland to rescue the love of his life (Emilia Clarke) that he left behind. Failing to integrate himself into the Empire’s military structure via an inability to follow orders, Han falls in with Tobias Beckett (Woody Harrelson) and a band of thieves trying to secure a large amount of hyperspeed fuel for an intergalactic criminal syndicate leader (Paul Bettany). Seeing this as a lucrative opportunity to raise some cash and buy his own ship, Han tags along, getting into more trouble than he bargained for.

One needn’t look further than the poster for Solo: A Star Wars Story to know that Han also becomes acquainted with his closest friend Chewbacca (Joonas Suotamo) and his best frenemy Lando Calrissian (Donald Glover). Anyone familiar with the Star Wars saga already knows who some of these characters are, and they can remember just where these characters end up and how they got to that point. The biggest problem facing the credited father/son screenwriting team of Lawrence and Jonathan Kasdan is that the arcs for these characters are already well known, and nothing that Solo: A Star Wars Story can do will change what has already been established in great detail. It wants to be a grand love story and adventure that wants to explain how Han Solo got involved with the rebellion in the first place, but when the viewer knows exactly where everything will lead in the future for the character, it all feels superfluous and curiously devoid of stakes or emotional investment.

The first twenty minutes where Han attempts to outrun his crappy, thankless life are a dreadful slog. Filmed in garish blue lighting or a thick haze of smoke (depending on where the scene takes place) it’s painfully ugly to look at. It’s muddled and curiously muted by Star Wars standards, to a point where one can barely make out the faces of the characters. It also adds a lot of unnecessary backstory to a film that’s already comprise of nothing but unnecessary backstory. Nothing picks up and becomes fun until Han and Beckett join forces. The Kasdans and Howard could have just plunked the viewer into the centre of Han’s turn towards a criminal lifestyle, and it would still make sense because Han is already an established character, early years or not.

But around the time Beckett and his crew stage an exciting and dazzling high speed train robbery, Solo: A Star Wars Story starts coming to life and having some fun. The universe hopping heist mechanics and accompanying twists aren’t anything new, but they also aren’t too convoluted to distract from an already overstuffed story. The opening feels like unnecessary medicine made up of details that were never needed or asked for, but everything that follows is payoff for having to sit through that. The visuals also improve exponentially, including a nice blending of practical effects work and modern CGI and motion capture. It’s not that the remainder of Solo: A Star Wars Story isn’t without its darker story elements and visuals, but once the unnecessarily brooding prologue is out of the way, Howard and his cast relax into a more amicable, familiar groove.

While the Kasdans tend to add too much mythology to a universe already drowning in the stuff, and Howard has a directorial style so indistinguishable that almost anyone in the world could have put their name to this, they do understand the personality of Han Solo perfectly, and the reason this whole prequel might feel redundant is because the character emerges fully formed. He’s a gruff, cocky, single-minded, smart ass with a great amount of skill and barely more guts than brains. The only real update here to the character is the not-too-earth-shattering revelation that his personality was born from a fearful survival instinct. Overall, it feels like what one would imagine a standalone Han Solo adventure would be like, and if that’s what you want, that’s what you’re going to get. 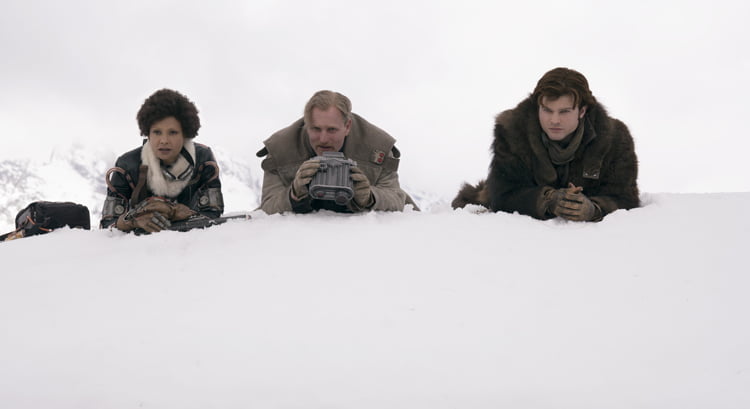 I’m sure there will be some who will unfairly take Alden Ehrenreich to task for not really looking or sounding at all like a young Harrison Ford, but there’s a lot to praise in his approach to Han Solo. Instead of mimicking Ford, Ehrenreich is moulding the character again from scratch. The established body language of Solo is always present in Ehrenreich’s performance, but Han’s demeanour has yet to reach the point most fans of the series will recognize from A New Hope. Solo: A Star Wars Story is about Han’s formative years, and the lead performance at the heart of it all feels appropriately like a slow metamorphosis. Ehrenreich acclimates himself nicely to the physical and comedic demands of the role, and while I doubt this take on the character will open too many eyes to greater implications about the character, it’s solid in all the ways it needs to be.

However, it’s the supporting cast that steals most of their scenes. Clarke and Harrelson turn in sympathetic, nuanced work opposite Ehrenreich as people who like Solo but are keeping their emotional distance for various reasons. Bettany is somewhat underused as the film’s primary villain, but he’s a perfect blend of charming and slimy whenever he appears. Glover is a perfect choice to play a younger Billy Dee Williams, and it’s easy to see why some are suddenly eager to see a standalone Lando film, but he’s sometimes upstaged by the work of Phoebe Waller-Bridge as Calrissian’s extremely woke and hilariously delusional and lovesick robot navigator. Solo: A Star Wars Story is often in danger of having supporting characters that are more interesting to follow than the main character, but considering that Han has already been written about at length, that might be kind of the point.

Solo: A Star Wars Story is aimed squarely at the fanatics who want to know how Han met Chewie, what the Kessel Run was, and why Lando has such a tenuous relationship with the main character, and while the film finally addresses those questions, the answers were never needed. It’s the kind of film that’s fun in the way a Flash Gordon short used to be fun, only in those Flash’s backstory wasn’t constantly being rehashed and stretched almost to the breaking point. It’s a film that wants to be entertaining above anything else, and while that might not be what die hard Star Wars fans expect at this point after a recent run of exceptionally made franchise entries (except for Rogue One, which suffered more from a lot of the same problems), it’s a fun popcorn flick nonetheless.

Solo: A Star Wars Story opens in theatres everywhere on Friday, May 25, 2018.

Check out the trailer for Solo: A Star Wars Story: