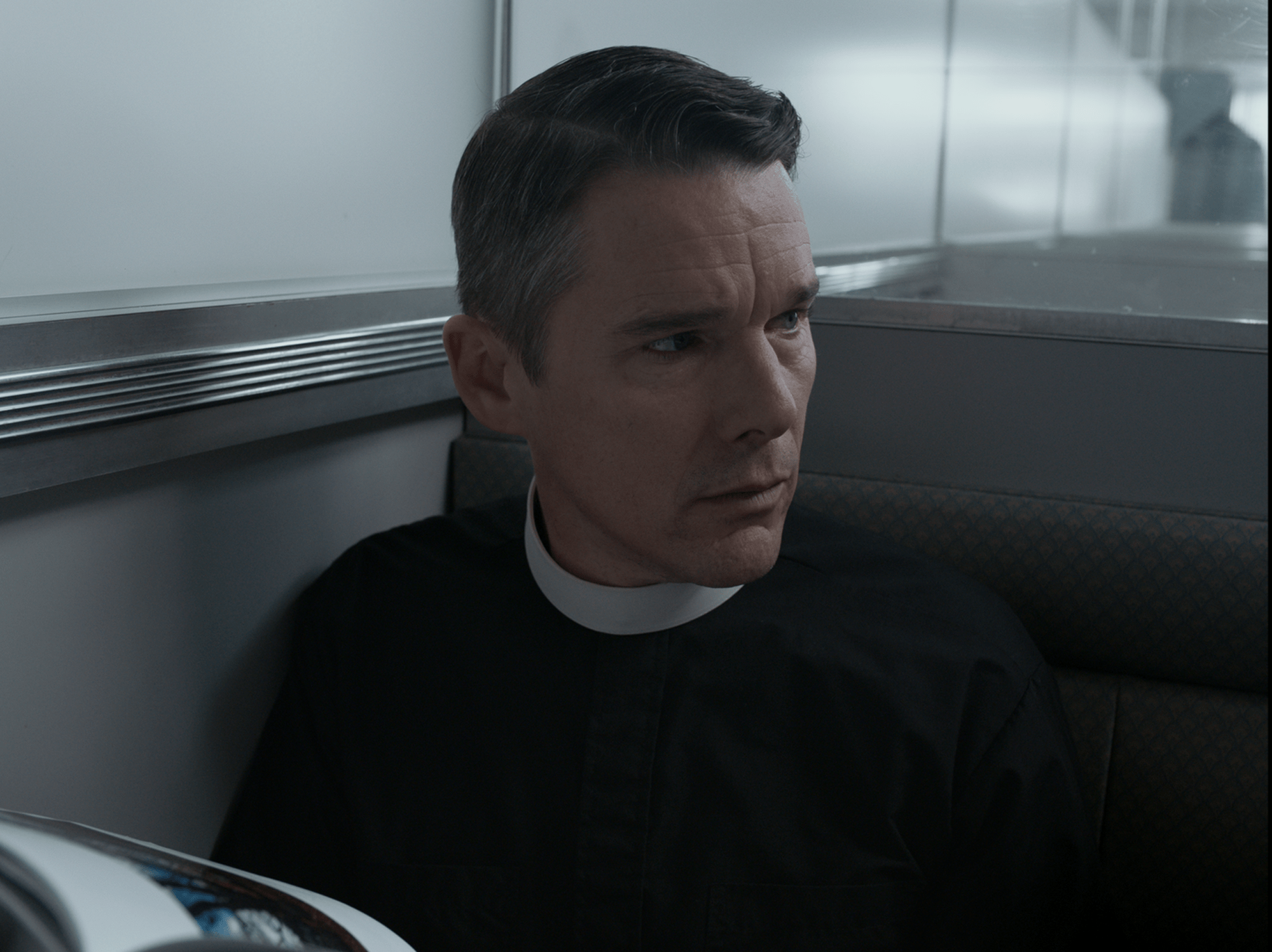 After toiling thanklessly for the past fifteen years in the cinematic margins, writer-director Paul Schrader has produced a monumental work of passion, grace, and anger in the form of First Reformed. A work that feels birthed from religious, professional, and sociological frustrations that have been simmered long enough to boil over and start a fire on the burner, First Reformed isn’t merely the work of someone with a renewed sense of purpose. With this insightful, timely, and contemplative look at faith and its role in the world today, Schrader proves that he still has the ability to move and provoke viewers like the best of them, and lead actor Ethan Hawke reaffirms his status as one of the most underrated talents of his time.

It would be trite to say that Reverend Toller (Hawke) is having a crisis of faith, especially since numerous aspects of the father’s life are in freefall. When we meet him, Toller isn’t too far removed from the death of his soldier son in Iraq – caused in some small way by his family’s traditional dedication to military service – and the subsequent crumbling of his marriage. He presides over a heritage church in Upstate New York, just outside of Albany, which is more of a historical attraction and gift shop than a flourishing congregation. With the church about to be re-consecrated under the preparations of Reverend Joel Jeffers (Cedric Kyles, a.k.a. Cedric the Entertainer, in a rare dramatic turn), the leader of the local megachurch, Toller still seems subordinate and subdued. Sleepwalking through his duties with minimal effort, Toller confides his feelings in a diary he has agreed to keep over the course of a year. Toller is roused from his complacency, however, when Mary (Amanda Seyfried), a pregnant housewife, begs the reverend to counsel her troubled war veteran and budding environmental terrorist husband (Philip Ettinger).

Information about Toller, his increasingly desperate professional situation, and deteriorating mental health is doled out slowly throughout Schrader’s meticulously and metaphorically structured sequences and dialogues. While Schrader himself would likely compare his work on First Reformed to the films of many of his idols (Ozu, Bergman, and Bresson, to name the most obvious points of comparison), this strikes as a darker film in the vein of Rohmer. Characters carry on lengthy dialogues with each other, regardless of whether or not they have much to say or if they even want to say it. Every word and sequence drips with deeper meaning, context, and tension. There’s a surface level tension to First Reformed that only grows more captivating the more one is willing to dive into what Schrader has crafted, and while it will build to a point that will make comparisons to the filmmaker’s script to Taxi Driver obvious, unavoidable, and intentional, every moment that precedes the sure-to-be divisive climax comes across with potency and vibrancy.

First Reformed takes a head long dive into topics no one wants to have discussions about because if one were to bring them up in casual conversation in our current bipartisan society it would lead to discomfort, hurt feelings, and explosive arguments. The arguments had in First Reformed are infrequently explosive in nature, and the tone is always restrained, but Schrader deftly makes the case that such politeness and gentility can foster greater darkness and resentment that flourishes without being balanced or checked.

Is it wrong to bring a new life into a world as divided and dangerous as ours? Does religious faith make people naive, or does it offer a necessary balm for the harshness all around us? What does religion mean to an up and coming generation of people who can’t envision a bright future, either with or without the presence of God? Why are people who abhor violence so quick to acquiesce to it, wittingly or not? Why does everyone need to shout in a bid to appear captivating? Why should we focus on saving our societies from perceived moral ills when our environment will likely die before we ever solve our sociological problems? When does sadness become despair, and why do we not allow people to mourn loss on their own terms? Why is it suddenly appropriate to make religion both political and personal? These are just a handful of the questions that Schrader seeks to provoke thought towards, and First Reformed doesn’t just demand full and undivided attention, but it also asks that the moral wrestling match continues long after the abrupt final frames. If we can’t have these discussions rationally and sanely among our peers in the echo chamber of everyday life, Schrader wants us to have a catalyst for a more internalize, and no less contentious conversation. 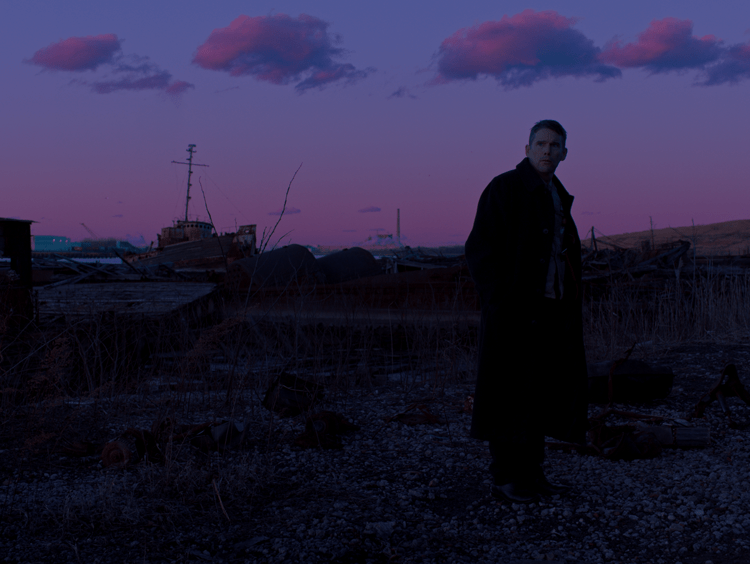 Visually, Schrader also wants viewers to never escape these questions. Shooting in the now somewhat claustrophobic and outdated Academy ratio, Schrader and cinematographer Alexander Dynan make certain that every shot is perfectly centred. Even if the overall tenor of the dialogues and performances lend themselves to ambiguity, Schrader remains positive that the visuals shouldn’t often hint at a larger world around the characters. It’s Schrader’s most visually polished film as a director, with everything falling into place for a specific, rigidly controlled reason, allowing the material and performances can take up all of the remaining oxygen. Only delving into more ethereal visual territory once, First Reformed subtly conveys the inner turmoil of its main character and his increasingly troublesome soul searching.

Schrader is aided immeasurably by Hawke in one of those performances that screams “no one else on earth could have done this.” It’s a delicate, incremental work that’s not unlike De Niro’s turn in Taxi Driver, but far more internalized and openly pious. Equally sympathetic and distancing at first before growing more conflicted, Hawke and Schrader brilliantly get to the heart of the pride and selfishness that can fester in the depths of one’s depression, and they do so without judgment, unnecessary explanation, or melodrama. Eschewing tics, tells, and shorthand, Hawke opts for a more primal approach. As dangerous as it becomes, Hawke’s performance has a lived in quality that mirrors Schrader’s vision for the film around this character perfectly. No one would ever want to be Reverend Toller, but through Hawke’s work it’s easy to see how so many people have a personality akin to this character buried deep inside them.

Religion and politics have always been topics close to Schrader’s heart and mind, so in that respect First Reformed isn’t anything all that new for the filmmaker outside of this film’s inciting trigger being ecological in nature. But after a decade of noodling about with minimal success in genre related fields, First Reformed strikes as the first genuine work of uncompromised art from Schrader in a long time, and it feels every bit like a deeply personal work. Like Toller has been building up intolerance towards the world and the God he was called upon to serve, Schrader has clearly bottled up a lot of the feelings contained within First Reformed for a long time. Thankfully, he’s erudite, witty, and soulful enough to convey these feelings in such a sophisticated manner without giving in to solipsism. Schrader has unquestionably thought about First Reformed for a long time, and I hope to look back on it for just as long.

First Reformed opens in Toronto (Cineplex Varsity and VIP) and Vancouver (Fifth Avenue) on Friday, June 1, 2018. It opens in Montreal, Quebec City, Ottawa, Edmonton, and Winnipeg on June 8, in Calgary, Halifax, and Kingston on June 15, in Victoria on June 22, and in Saskatoon and Regina on June 29.

Check out the trailer for First Reformed: