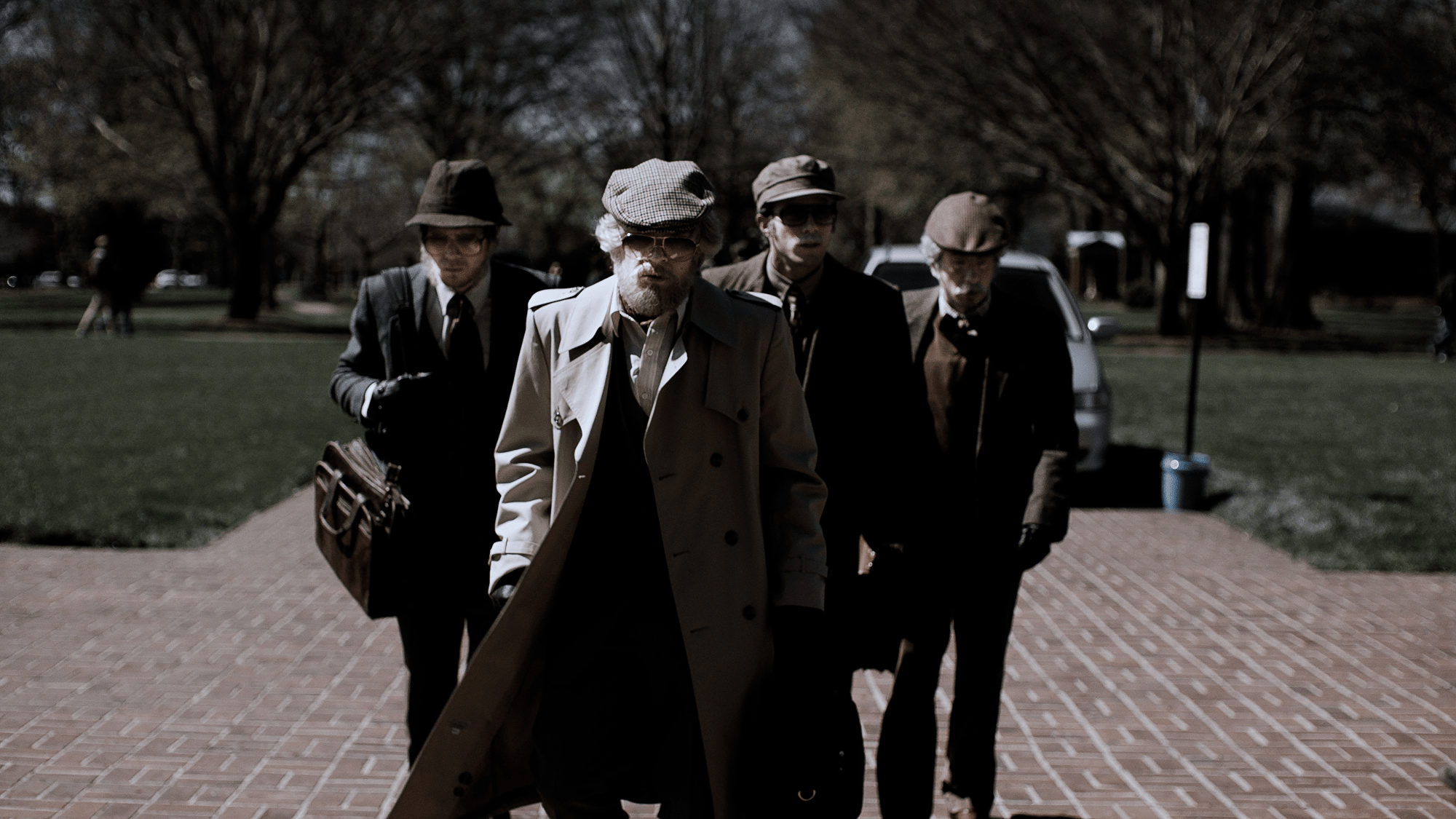 A fascinating and effective marriage of documentary interview techniques with slick, stylish, fictional filmmaking, director Bart Layton’s unique heist drama American Animals delivers plenty of thrills and high spots while demanding the viewer to acknowledge and wrestle with the narrative’s true story roots from the opening frames. The latest from Layton – who previously made the equally successful, stylish, and playful documentary The Imposter – straddles the line between documentary and docu-drama, employing the services of a quartet of skilled up and coming actors and the contextual help of four men who found themselves at the heart of a strange and potentially lucrative real life criminal endeavour.

In December of 2004, following a year of planning and research, Lexington, Kentucky area university students Spencer Reinhard, Warren Lipka, Eric Borsuk, and Chas Allen attempted a twelve million dollar heist built around an unusual target. They set their sights on robbing the rare book room at the Transylvania University library and making off with a set of virtually priceless John James Audubon originals, an early edition of Darwin’s On the Origin of Species, and whatever else they could get their hands on and sell for a fair bit of cash. The plan started in earnest with Reinhard, a budding visual artist, growing tired of his boring, safe life, and was escalated by his troublemaking, impetuous Lipka, a burnout on the verge of losing his athletic scholarship. Warren took the idea of such a heist far more seriously than Spencer, leading to his eventual enlistment of University of Kentucky accounting student Borsuk as a third set of hands and the affluent Allen as a getaway driver-slash-money man.

American Animals was made with the direct, on screen participation of the four men who planned the theft of the rare books. Reinhard, Lipka, Borsuk, and Allen are each interviewed by Layton in different settings to get their accounts of how the heist was planned and executed. But instead of making each of them relive their crimes for the sake of re-enactment, Layton has hired four polished and well cast young actors to serve as their avatars in heavily scripted dramatic sequences.

Barry Keoghan (Dunkirk, The Killing of a Sacred Deer) plays the shy and reserved Reinhard. Evan Peters (American Horror Story, the current cycle of X-Men films) gets to cut loose as the cunning but naive Lipka. Canadian actor Jared Abrahamson (Hello Destroyer) plays the analytical but skittish Borsuk, and Blake Jenner (The Edge of Seventeen) takes on the persona of the entitled and skeptical Allen. While the actors do the bulk of the heavy lifting here, their real life counterparts will often chime in (along with other mostly fabricated and performed interviews) for context, character clarifications, or to point out inconsistencies and contradictions in each other’s recollections.

British director Layton, working with a much higher level of ambition than his already enviable first theatrical feature in 2012, has to tread on cautious moral ground throughout American Animals, a film that some critics are destined to say is either too stylishly precious by half or something that unwittingly glorifies a real criminal act. By allowing the perpetrators of the heist to dictate the action in no small part, American Animals always courts the idea that it might be celebrating criminal ingenuity through genuinely thrilling and kinetic depictions of the events being described. But those understandably valid surface level criticisms are misunderstanding what Layton hopes to accomplish with American Animals. Through the use of high drama and established heist movie tropes, Layton has offered a performative counterpoint to the seemingly remorseful and certainly older/wiser robbers. American Animals isn’t a celebration of crime or a lighthearted yarn about a heist that seems too outlandish to be true. It’s a film about youthful hubris, stupidity, and entitlement that uses flashy cinematic tropes to make its effective, evocative points.

Reinhard and Lipka studied classic heist films to gain pointers on how to stage a large scale larceny, so Layton takes his cinematic marching orders from the mindset of his documentary subjects. Getting into the shoes of the initial masterminds behind the operation, Layton and his cast of capable performers go about delivering an entertaining caper flick that’s highly indebted to the likes of Scorsese, Lumet, Melville, Dassin, Clouzot, and Tarantino (especially Reservoir Dogs, but with not nearly as much bloodshed). Every movement or action is staged to near visual perfection, every line of dialogue delivered with portentous meaning, Anne Nikitin’s lush musical score adds considerable dramatic momentum, and every edit is designed to land like a jolt, slap, or full stop. With the exception of the harrowingly depicted robbery, its aftermath, and a telling epilogue, Layton mounts everything as these kids saw events playing out in their heads, and not as they probably happened in reality. American Animals is endlessly referential, almost to a fault, but within those clearly marked signposts pointing back to other heist films lays the film’s key message.

Layton’s thesis is that a bunch of young adults who suddenly decide to team up in an effort to steal millions in artifacts will naturally be influenced by the media they consume, but that they never would have taken the media so seriously in the first place if their lives had more satisfying meanings. The fraud and deception at the heart of American Animals isn’t based in the desire for monetary gain, but one born from boredom and frustration. As one other interview subject (who does appear as herself) astutely points out late in the film, these young men were searching for a “transformative experience,” but they were looking for shortcuts on how to enact such changes in their lives. The four robbers are embarrassed to varying degrees about their efforts in hindsight, and they differ wildly about their own levels of culpability, but boredom, curiosity, and a desire to be remembered for a futile and stupid gesture are the only emotions on which they agree.

While their performances might be fictional by definition, the four actors tasked with playing Reinhard, Lipka, Allen, and Borsuk are exemplary at providing both gravitas and context for a heist film where the motivations are unclear and based in ennui. Abrahamson and Jenner each get standout scenes – the former during the actual heist and the latter during an argument in the job’s aftermath – but they also have the least to do by design, since neither Borsuk nor Allen came onto the heist until well into the planning stages. Keoghan might look the least like his real life counterpart, but he’s the best at conveying the flip-flopping moral compass of his character, always playing Spencer as someone who keeps his cards and thoughts close to his chest. The best all around performance comes from Peters, who gets the juiciest role as the far too eager Lipka. The four actors have been given a basic level of understanding from Layton’s script and the recollections of their real life counterparts, but they’re also fleshing out emotions and nuances that the film’s complicated blending of fiction and reality needs to succeed. It’s up to these four talented young men to fill in the blanks, and their work is the dramatic glue that holds American Animals together.

On the documentary side of things, American Animals mirrors Layton’s work on The Imposter nicely. Just like his previous film, viewers will be left wondering if his interview subjects are remorseful or “on the level.” The dramatic recreations of everything they did play with audience empathy in strange, unexpected ways throughout the film. Layton accomplishes his delicate task of getting to the heart of a foolhardy criminal endeavour through ambitious methods and narrative trickery without glorifying what happened or exonerating the people involved. The morals here are simple: crime doesn’t pay and it’s a lot harder than it looks. There’s not much gray area within those boundaries, but what in its place is an admittedly riveting, well told story.

Check out the trailer for American Animals: