Noah Jupe on A Quiet Place and the sound of silence 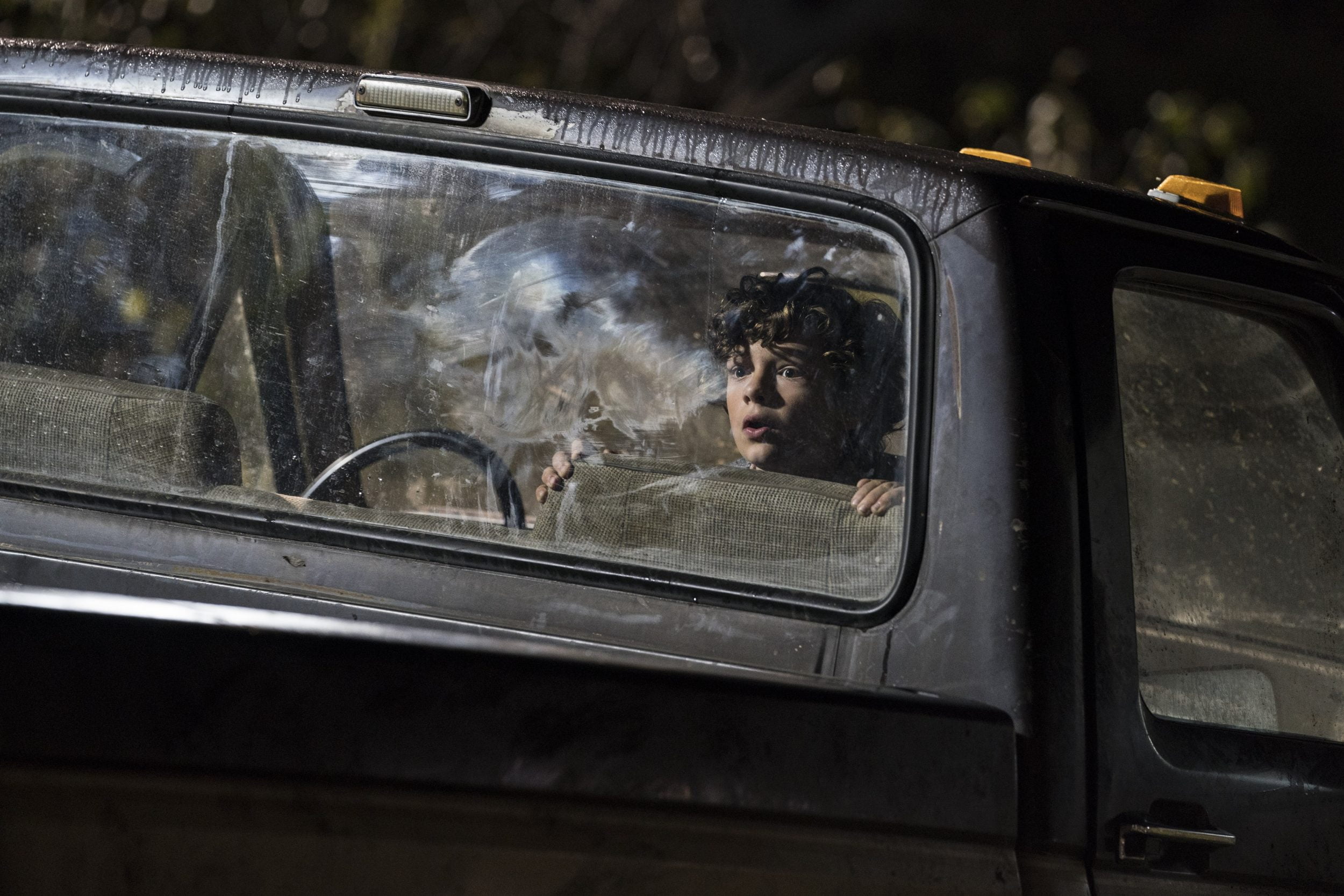 Thirteen-year-old actor Noah Jupe has shared the screen with a number of Hollywood heavyweights over the last three years of his rising career, including John Hurt, Charles Dance, Matt Damon, Julianne Moore, and most recently, actor turned director John Krasinski for his film A Quiet Place.

A Quiet Place stars Krasinski and Emily Blunt as a couple living on a farm with their three young children, but after creatures arrived and started hunting humanity by the sounds we make, silence has become key to survival. One word, or misstep, will bring the creatures and nothing seems to be able to stop them.

Noah Jupe stars in the film as Marcus, the middle child of the family, alongside Millicent Simmonds, who plays his sister, Regan. I had the chance to interview Jupe recently for the film, and we chatted about his career, working with Krasinski, and even what it’s like for a British actor to work with an American accent.

A Quiet Place is out now on Blu-ray and home video.

Andrew Powell: You know, I’ve got to say, I’m very impressed with your film selections. The films that you’ve been in so far–it’s such a great, well-rounded lineup of films. Is there someone you have to thank for that, or how do you select your films?

Noah Jupe: “Well, I’ve just kind of ridden the waves, you know, and I’m really glad that you say that they’re all great films that I’ve chosen because, you know, I’ve kind of just chose them all, and it was what I got. I literally can’t remember what’s happened in the past year. It’s been a crazy ride.”

Powell: That’s great. That’s a good problem to have.

Powell: For A Quiet Place, and working with such an amazing team, what was the biggest thing that stood out for you, that you now think about the most?

Jupe: “I’ll always remember how much it felt like home there, so far away from my actual home, because I live in England. It just felt like everyone was there, and everyone supported me, and it felt really safe, seeing as the movie was about not feeling safe, if you know what I mean. So, yeah, and it was just such a great crew, and it just felt like such a great family.”

Powell: My understanding is that working with John Krasinski on this, it sounds like he must be a very comfortable guy to work with.

Powell: What kind of director was he for you?

Jupe: “He’s a really intense director, so he’ll come up to you, and he’ll talk with you, but he’s also … He’ll really ask you what you think, what you feel about the scene. And even if you say “I don’t really feel anything,” he’ll be like, “No, no, you’ve got to feel something. Tell us, tell us.” He’s always listening to ideas.”

“And one thing he really taught me is that … Go into a scene knowing what you’re going to do, but don’t hold back on what you think is right, even if it’s wrong, because it might be a good idea, and it might be something that could help the movie be even better than it already is.”

Powell: That’s wonderful. Have you seen the film? I assume you have?

Powell: Do you find the film scary, even though you were in it?

“But actually, when I got in the cinema and I sat down to watch it for the first time, I jumped at all the places where I knew I was going to jump. I was like, sorry, I’m going to jump here. It’s definitely a very scary movie, and I knew that because it wasn’t just the script that was scary. That when I got into the film, it wasn’t like, “Oh, there’s a bit here.” I actually couldn’t remember what was happening. I couldn’t remember the script at all because I was so hooked with the movie itself.”

Powell: Did you feel any of those emotions on set? Did it unnerve you at all when you’re making it, or is it just a completely different atmosphere?

Jupe: “Yeah. Yeah, yeah, yeah. John drew us pictures of what the monster would look like. I mean, it’s nothing like the monster now. The monster now is one that would enter your nightmares sometimes, but he showed us pictures, and that was just scary just seeing that, just imagining that coming after you is a very unnerving idea to have in your head.”

Powell: Absolutely. It’s amazing how unnerving it is, especially with the silence in the movie.

“It’s funny because I would never class it as a silent movie. It’s not like a silent movie… I know there’s silence in it. It’s all about it, but it feels like it has a lot of noise. It feels like the silence is a noise, if you know what I mean.”

Powell: Yeah, for sure.

Jupe: “They’re speaking to each other through silence because, technically, silence is a noise. You’re hearing nothing, so it felt kind of quite loud to me when I watched it instead of meant to be… it was intense, and there was no sound, but it felt kind of noisy in a way.”

Powell: The silence is almost depressive in some ways.

Powell: When you’re acting in a film like this where there’s not a lot of dialogue, does that make it harder because you’re conveying so much with gestures and looks?

Jupe: “Yes and no. I mean, obviously no in a kind of ego sense where you don’t have to learn lines the night before, but yes in a way that you have to really get down into your character’s emotions. You have to kind of almost amplify those emotions to make sure it’s noticed on screen, and make sure people know what you’re feeling, and understand what this character’s going through and that sort of thing.”

Powell: It sounds like there’s a lot coming up for you as well that’s very exciting. Are there any projects that you can talk about or tease right now?

Jupe: “Well, I have a couple that I can’t talk about, but I would say one that I’ve just finished shooting, which is called Honey Boy.”

“I just finished shooting that a couple of weeks ago, and that was great fun. Personally, I really don’t know how it’s going to turn out, and what’s going to happen, but I feel in my bones that it’s going to be a great movie, so I’m very excited for that one. That’s probably one of the ones I can talk about in a way.”

Powell: Well, the team behind it sounds fascinating, especially with Shia LaBeouf writing it, and Alma Har’el directing.

Jupe: “Yeah. It was a beautiful, beautiful time, and I learnt so much, and I’ve taken so much away from that job.”

Powell: I’m sure this is universal as an actor maybe, but do you feel like every job teaches you something, or does it depend on the job?

Jupe: “Definitely. My mum’s an actress, and she’s been doing it for awhile now, and she always says, ‘You’re always learning.’ There’s no point where you get on a set and you don’t learn. It could be about anything, but you are always learning something. You should go on a set thinking, ‘I don’t know anything about acting,’ so therefore you can learn all the things you didn’t know. It’s like you need to be open to learning things because you’re always going to learn things on a set.”

Powell: That’s fantastic. So, do you find that people are surprised by your abilities with accents? Because it amazes me every time I speak to someone who comes out of the British acting schools who is so proficient at doing other accents. Are people surprised when they find out that you’re British?

Jupe: “Yeah. That’s what mostly happens. I can’t remember which audition, but I went for an audition, and I got the part, and I went on set, and I started just talking to a few people who’d been in the audition, and they were like, ‘Oh, wait, you’re British?’ I was like, ‘Yeah.’ In the moment, I just needed to be in the accent, so I wasn’t going to fail when I started doing the scene, and they had no idea at all.”

“But also, when you’re in America, it’s just great because everyone there speaks in the accent, so you don’t want to go up to someone and start speaking British, because it will be weird to them. They’ll focus on your British accent than what you’re actually saying, whereas if I go up to them and speak American, they’re like, ‘Oh, cool, he’s normal,’ in a way.