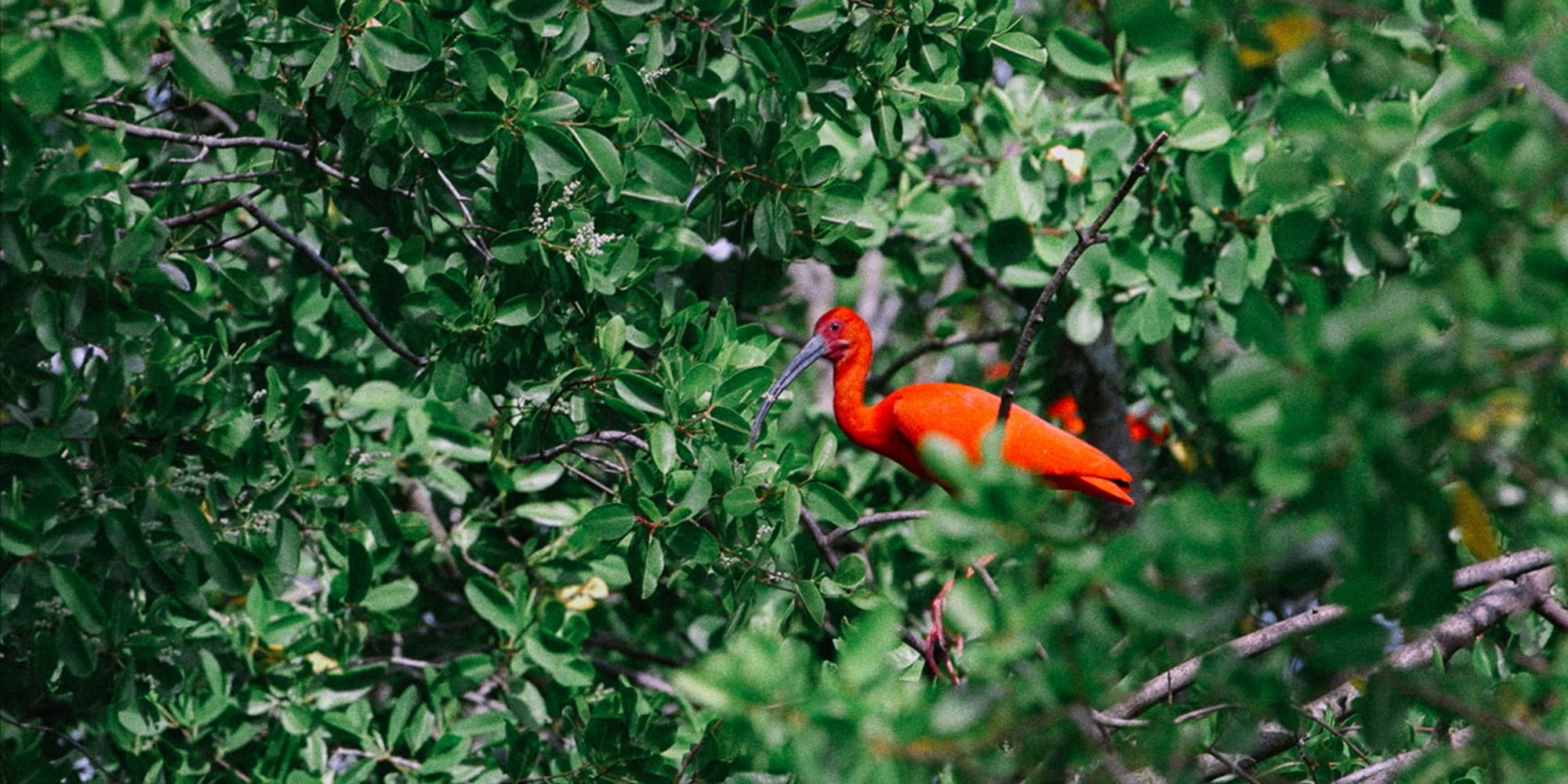 After winning the award for Best Short Film in 2011 at the Toronto International Film Festival with Doubles with Slight Pepper, filmmaker Ian Harnarine returns to TIFF this fall with the world premiere of Caroni, screening in the Short Cuts 8 Programme.

Once again drawing on his roots as the Toronto born son of immigrants from Trinidad & Tobago, Harnarine’s latest tells the story of a mother working in America who’s trying to stay connected to the young daughter she has back in Trinidad. Working as a one of the many Trinidadian nannies in New York City, Ranji (Radha Singh) spends time with her daughter, Mosaic (Arianna Ruben), via video chat. The distance between the mother and daughter is starting to take its psychological toll on both of them, but young Mosaic is able to find and feel the presence of Ranji through her love of birds, particularly the Scarlet Ibis, the national bird of Trinidad.

Inspired by the many West Indian nannies he observes on a daily basis in New York City (where he attended NYU’s film school for his graduate studies after graduating from York University), Harnarine’s film gets its name from the Caroni Swamp, a protected land in Trinidad that serves as a nesting ground for the Scarlet Ibis. Dividing his seven days of shooting time between New York and Trinidad, Caroni was filmed initially as part of a larger project about the nature of evolution created by Imagine Science Films and Labocine called The Chimera Experiments. Caroni was one of the shorts created to be part of an anthology film of ten films from ten different directors entitled Mosaic.

We caught up with Harnarine (who’s currently collaborating on a film with Spike Lee) to talk about Caroni and his return to TIFF:

Your latest film was inspired in part by seeing the large number of West Indian women who were working in New York City as nannies. How does making a film about a mother and daughter who live apart change your perceptions about motherhood, especially when one of the characters is playing a surrogate mother to other people’s children?

Ian Harnarine: I think it’s a very complicated relationship. For me, I’m interested in the intrinsic familial bonds, like between parents and children, and the pressures that can be put on such relationships. I don’t pass any judgement on women that choose to be nannies. In most cases, it’s a very maternalistic decision which allows them to provide for their own children, whether back home or with them in New York. A lot of nannies don’t have many other opportunities, and the American dollar can go a lot further back home. With that being said, the stresses that result of distance are real and manifest themselves for both mothers and children in ways that can reverberate over a lifetime.

What are the difficulties of casting two performers to play a mother and daughter who never physically interact with each other? How does one build a chemistry and rapport between two actresses who never meet face to face in the film?

Ian Harnarine: We purposely decided to keep these two actors apart, and they never met. They never communicated with one another. It was a big decision to go this route, but I was hoping to create an emotional distance and a coldness in the performances. Logistically, the mother character was able to play off pre-recorded videos of the daughter. I imagine this is a tall order for actors, so it’s a testament to Radha Singh and Arianna Ruben and the skill that they have as performers to give the characters such nuance.

Although the world premiere of the film is happening in Toronto, but I noticed that the film will also be playing soon at the Trinidad & Tobago Film Festival. Do you see the film playing differently in Trinidad & Tobago than it would among West Indian viewers in other parts of the world?

Ian Harnarine: From my experience, the film does play differently to different audiences, but everyone relates to the basic human story. I like to create multi-layered stories that people can find interesting regardless of geography. But, there are some details in the film that I think Caribbean people will “get” that other audiences may not like: the daughter’s accent and school uniform or using the tassa drumming track which is used primarily for celebratory events in Indo-Caribbean culture. I believe it may sound like regular drums to a general audience, but to a West Indian audience, I think they will know exactly what those drums are.

Some of the film was shot in the Caroni Swamp, which is a heavily protected ecological wonder. What was the process of gaining access to the land?

Ian Harnarine: It was difficult! We needed permits and approvals from the Ministry of Agriculture, Land and Fisheries of Trinidad & Tobago, which came through at the last minute. We also got a lot of help from Kalpoo’s Caroni Bird Sanctuary Tours. They are two brothers that are also Wardens of the swamp that do a lot of work in conservation and education. We were sworn to secrecy to never divulge where we actually shot the film in the swamp, because the spots are off limits to tourists and fishermen out of fear of poaching. I’m very grateful for their local knowledge about the swamp, but humbled by how much they care about the birds and the swamp. We also enlisted the help of a local oyster fisherman who was kind enough to take us out to the mouth of the swamp where it meets the Gulf of Paria. We got hauntingly beautiful footage of the swamp on that trip.

Once at the Caroni Swamp, how much time did you spend there documenting the wildlife? I can imagine that finding natural images that worked well for the film required a lot of patience.

Ian Harnarine: We shot in the swamp on four different occasions mostly in the early mornings or the late evenings when the birds are more likely to be there. However, it wasn’t their nesting season so the sheer numbers were much smaller than in season. There was one evening when we didn’t get any useable footage, which was frustrating, but still enjoyable to be in the water surrounded by nature. On other days we put on some tall wading boots and saw lots of Caiman lizards, snakes and other birds that would delight a birder. Those days were tough because it was incredibly hot, humid, tons of mosquitoes buzzing around and we had all of the camera and sound equipment that we needed. It was just myself and Elizabeth Wentling (the cinematographer), so it was a challenge. But with the help of our guide we were able to get relatively close to several Scarlet Ibis and we just shot A LOT of footage, letting the birds do their thing until they flew away. I remember the moment when one of them appeared to look directly at the camera and I got goosebumps – it was magical. But, we also had a lot of misses because it’s impossible to get the camera situated in the right place, follow them, pull focus all while on a rocking boat! That was expected and just required patience that we’d have other opportunities, which we did.