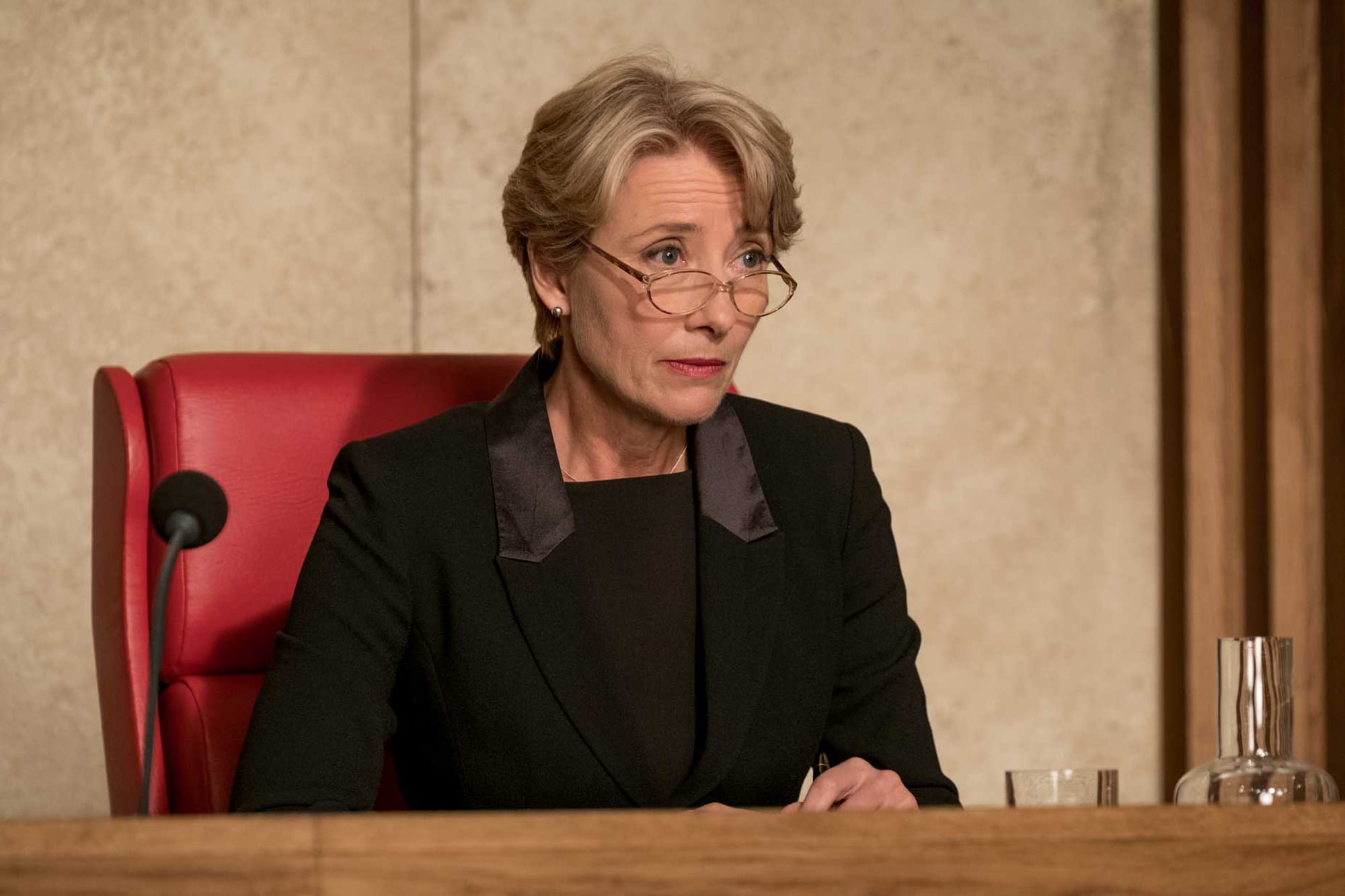 Veteran British director Richard Eyre’s uneven, but mostly commendable big screen adaptation of author Ian McEwan’s The Children Act tries its best to marry the two ill fitting tones of the novelist’s screenplay. Any faults with the courtroom drama turned stalker film are the fault of McEwan’s always hackneyed and lacklustre screenwriting attempts, and not of the cast or Eyre. If one stops long enough to think about the actual dynamics, abrupt tonal shifts, and characters throughout The Children Act, the whole thing falls apart spectacularly. It’s not much of a drama because it wheels freely through too many different emotional settings to maintain consistency. It’s not much of a character piece because the focus has been placed firmly on cramming in as many plot points as possible. It’s a mess, but it’s a very watchable and occasionally moving one.

High Court judge Fiona Maye (Emma Thompson) presides predominantly over domestic cases and family court matters, which is ironic considering that the high profile lawmaker has a crumbling, loveless marriage (to Stanley Tucci’s perpetually downtrodden husband character) and no children of her own. Not long after coming off one controversial, landmark ruling, another touchy case falls into her lap. Teenager Adam Henry (Fionn Whitehead) is dying in hospital from advanced stage leukemia and is in need of a blood transfusion. Adam’s parents (Ben Chaplin, Rosie Cavaliero) are devout Jehovah’s Witnesses who believe that such a process would make the young man impure, and the teenager agrees, refusing the life saving procedure even if it means certain death. The understandably worried hospital that’s watching this boy waste away beg the courts to allow them to perform the transfusion, insisting that the decision has been influenced by the family’s faith, and that the indoctrinated Adam doesn’t understand the gravity of the situation. Fiona realizes that this is a non-starter of a case from the outset, with the titular law stating that a hospital is well within its rights to perform any life saving procedures on patients under the age of eighteen. Still, Fiona wants to know what drives Adam’s decisions, and she makes the unusual request of paying him a hospital visit. It’s a decision that will change both of their lives forever.

Outside of the well performed, but unsurprising subplot involving Tucci and Thompson’s rapidly disintegrating relationship, the first half of The Children Act is a reasonably entertaining and kinetic sort of courtroom drama. The battle between theology and medicine plays out across lengthy scenes where pros and cons are trotted out, and ultimately the decision is made that the preservation of life holds more weight than a maintaining of religious dignity. It all unfolds with a decided slant towards rationality, but never talks down to the faithful side of the arguments too strenuously. Eyre (Notes on a Scandal, Iris) draws on his formidable theatre background and finds clever ways of making something potentially static and inert into something vibrant and emotional. By keeping a close eye on all of his performers and their delivery of McEwan’s sometimes overly punchy dialogue, Eyre maintains a sense of narrative compatibility throughout The Children Act, something that will serve the film well once it leaves the courtroom during the vastly less successful second half. 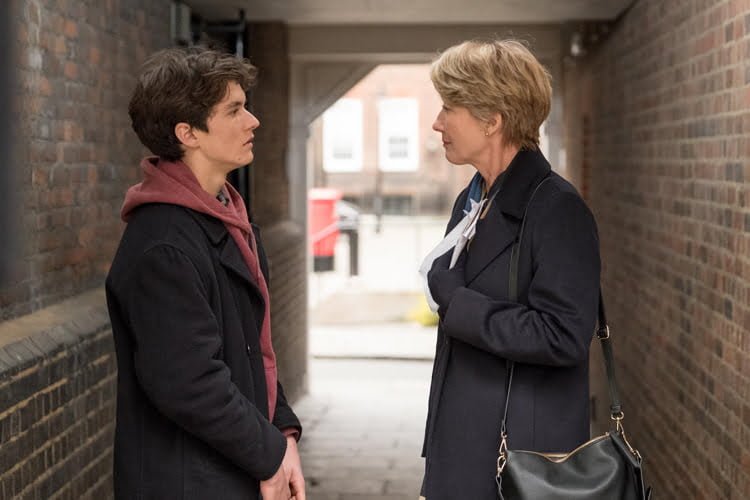 It’s hard to talk about what goes awry with The Children Act, mostly because McEwan’s material pivots on a major plot twist that turns the story into something vastly different than the moralist screed it started out being. The relationship between Fiona and Adam quickly grows complex and creepy, and while it’s expertly acted by the always reliable Thompson and the continually impressive Whitehead, there’s no shaking the feeling that such a tonal shift comes across as inorganic and forced. Needless to say, it emphatically doesn’t work, no matter how hard Eyre and his cast are trying to salvage things.

Such swerves and needless complications are a trademark of McEwan’s work as a novelist, and while his adaptation of his own material means The Children Act isn’t a huge departure from its source material, the writer still hasn’t managed to find a good way to make his works translate on screen. The Children Act boasts several of McEwan’s favourite storytelling topics (loveless marriage, infidelity, atheism, skittishness towards sexuality), and at times the script feels like it’s going out of its way to play the author’s greatest hits, albeit in a more contemporary setting than most of the better known adaptations of his work. Much like his script for the admittedly worse adaptation of On Chesil Beach, McEwan proves to be a writer that’s so in love with the preciseness of his words and situations on paper that he never once stops to question if they’ll ever translate to stage or screen. The Children Act is built around a mid-point twist that can work within the confines of a novel – where subtlety and story can play out longer – but will become head-scratching and abrupt when played out in the confines of anything less than a miniseries.

But if one were to take The Children Act as two separate films entirely, the results are a lot more forgivable and interesting. McEwan needs someone to rein him in, and I can only assume that his novels are the result of some top notch editing. Eyre and the cast aren’t fully up to the task, but they’re all very good at what they’re attempting to pull off, doing so with a great amount of grace, dignity, and nuance. They’re bringing elements to the table that McEwan seems incapable of doing himself. The Children Act is a messy, ultimately unsuccessful movie made by the best people for the job.

The Children Act opens in theatres everywhere on Friday, September 14, 2018.

Check out the trailer for The Children Act: