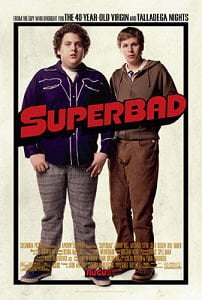 What tickles your fancy this weekend? A movie where teenage friends try to score booze for the big party, an A-list thriller where an alien virus tries to reprogram the human race, or maybe a sword and sandal adventure about Rome’s last emperor fighting to save his empire? Let me give you a hint; the only film that’s getting good reviews involves high school.

That’s right, the big release for the weekend actually looks like it will be director Greg Mottola‘s Superbad. If gross-out comedies aren’t your thing, this may not be the movie for you, but it was produced by Judd Apatow and Shauna Robertson, of 40-Year-Old Virgin fame, and written by Evan Goldberg and Seth Rogen from Da Ali G Show.

Dubbed by some critics as a possible sleeper hit, Superbad has all the momentum to be a huge film this weekend. Starring Michael Cera as Evan, and Jonah Hill as Seth, these two geeky, awkward buddies are bent on proving themselves by scoring beer for a party where they hope to finally pick up a couple of girls. Much like 40-Year-Old Virgin, the film is a mix of raunchy jokes with touching, sweet moments that Roger Ebert called, “A four-letter raunch-a-rama with a heart.”

The other big film, that’s bound to flop is Nicole Kidman‘s The Invasion. A remake of the classic Invasion of the Body Snatchers, the film changes details of the original to pass on alien replicated humans for a tale of an alien virus that comes to earth and reprograms people to be mindless, emotionless drones. Kidman is Carol Bennell, a psychologist who discovers the impending epidemic and hunts to find her son who seems to be immune.

The problem with Invasion is that throughout the uneven film, that was apparently forced into playing out as an action-thriller by producer Joel Silver, there is never a clear moment of terror or horror. For a film that’s supposed to be suspenseful, Invasion never passes beyond mildly interesting. We’re also forced to endure a story that never gives you a reason to care what happens to these people as they fight this alien virus.

Finally, there’s The Last Legion, a fantasy adventure about 12 year-old Romulus Augustus (Thomas Sangster), the last emperor of Rome who must escape imprisonment to fight for his empire. With the help of his teacher, Ambrosinus (Ben Kingsley), and Julius Caesar’s sword “excaliburnus”, Romulus escapes to find the last known, fabled Roman Legion – the Dragon Legion. Critics have been less than kind to the film however, with Frank Scheck of the Hollywood Reporter commenting, “We can only hope that the title of this misbegotten swords-and-sandals adventure is prophetic.”

Other releases include the comedy/drama Death at a Funeral, and the documentary King of Kong: A Fistful of Quarters.