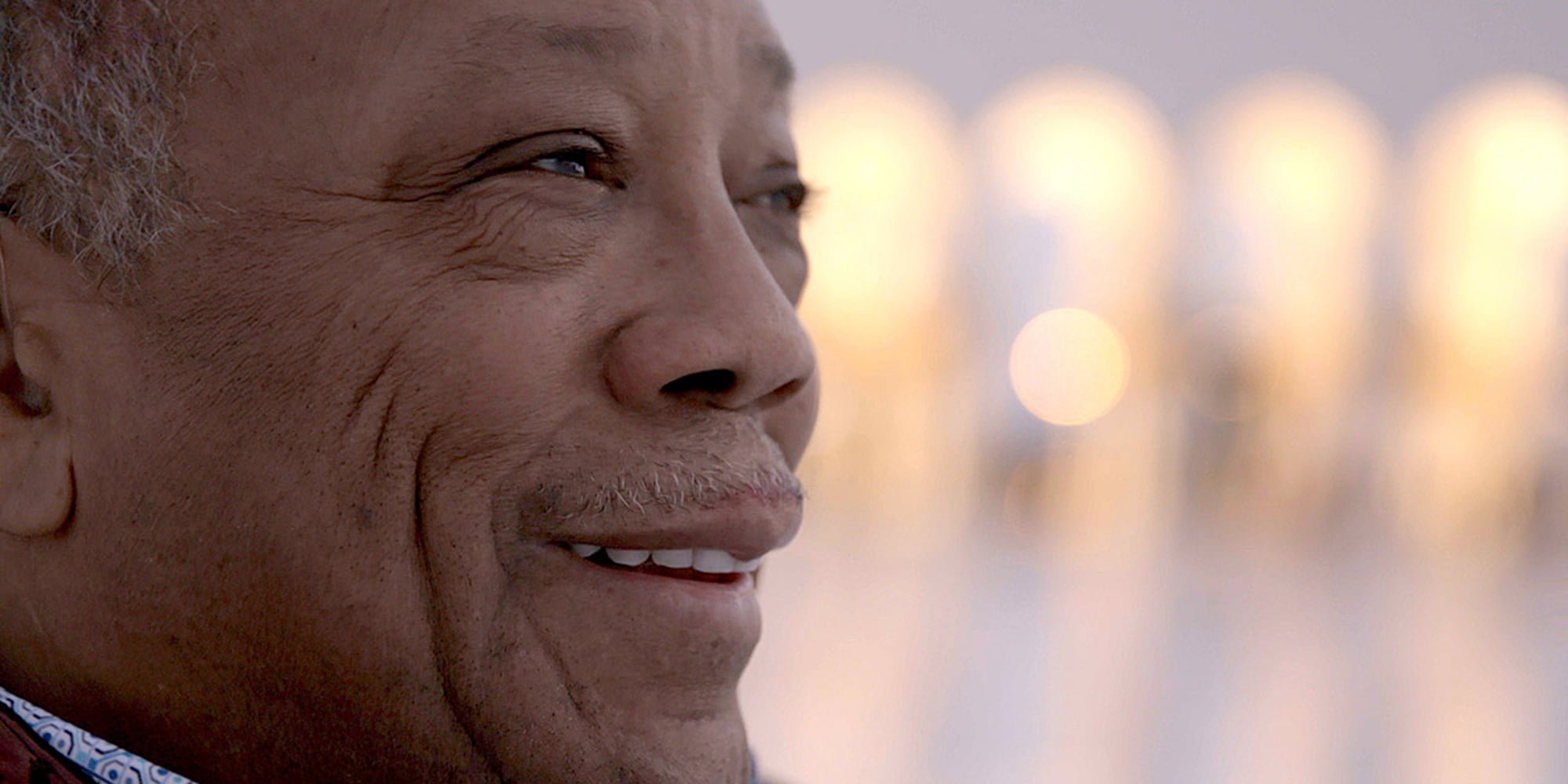 Quincy Jones has lived a life so rich, complicated, and noteworthy that one could fill a yearlong television series with his exploits, so the single two-hour documentary Quincy can only do so much to contain such a larger-than-life personality. But when that documentary is made by an award winning filmmaker – Alan Hicks – and one of the iconic record producer’s many children – actress and director Rashida Jones – such a small scale look at Jones’ accomplishments in and out of the music business feels as great as a single volume can get on the subject.

Through his own ground breaking music, orchestrations, and production work, Quincy Jones has become probably the most widely listened to musician walking the planet. No one has worked more tirelessly and prolifically to break down racial barriers in the world of entertainment than Jones. From his early years as a trumpeter travelling across the deep south at the height of segregation and racial tensions, to becoming one of the first black people to score major feature films (and conduct the orchestra at the Oscars), to his work with the likes of Frank Sinatra and Michael Jackson, to his innumerable charity works and productions, there’s almost nothing that Quincy Jones hasn’t accomplished in his career. It’s a lifetime body of work so varied and wide reaching that his hand in creating one of the most successful television shows of all time – The Fresh Prince of Bel Air – is one of the least interesting and most easily glossed over footnotes contained within Quincy.

Bouncing back and forth between Mr. Jones’ historical past and busy present is fascinating. Rashida Jones (who appears on camera several times alongside her father, understandably looking worried for the octogenarian’s health and well being) and Alan Hicks (Keep On Keepin’ On) create a fascinating parallel between the past and the present. Even after some major health scares – several of which the documentary’s crews were privy to – Jones refuses to slow down in his own age, frequently taking on gigs and large scale productions that mere mortals would find daunting at best and downright impossible at worst. Quincy Jones clearly functions at a higher level and has for his entire career. He’s one of the few human beings alive who has earned the right to name drop whenever he wants, and if you need to get a president or one of the world’s highest paid entertainers on the phone in a hurry, Quincy Jones is the dude you turn to.

Quincy boldly makes its core subject into someone who’s as fragile as they are strong. Quincy Jones seems to have been severely burnt out since the mid-1980s, and there’s a sense that the producer of more hit records in music history would probably agree. Rashida Jones (probably thanks in no small part to the closeness of her subject) and Alan Hicks are blessed with a documentary subject who’s incapable of bullshit. With multiple divorces under his belt, Jones freely admits that he wasn’t much of a father and even less of a husband. He’s been a recovering alcoholic for so long that one rightfully questions if Jones will ever be able to kick his addictions. Even after a diabetic coma and fainting on stage, Jones perseveres and keeps going ahead with his work without missing many beats. The gregarious and forthwith Jones admits to his shortcomings with a “take it or leave it” attitude, and simply goes about his work.

That’s not to say that Quincy isn’t a remarkably personal or introspective profile of a music industry titan. Quincy Jones is more than willing to get personal, and to him “dirty laundry” is just a pile of clothes waiting to be dealt with. He knows precisely what Rashida and Alan want to know about his life and work, and like any great entertainer worth their salt, he’s more than willing to give it to them. I know that there’s probably a ton that ended up on the cutting room floor here (especially considering that the film begins more or less at the start of the decade), so it’s hard not to want just a little bit more. But as a single volume take on one of the most fascinating entertainers to ever live, Quincy will do just fine.

Quincy is available for streaming on Netflix on Friday, September 21, 2018.

Check out the trailer for Quincy: