More of an insightful, nuanced, and comprehensive character drama than a detail oriented period piece, director and co-writer Wash Westmoreland’s Colette takes a historically significant literary figurehead and builds upon them a great amount of contemporary themes and parallels. The story might span from 1893 into the early years of the twentieth century, but Colette maintains a timely feeling that most historical biographies lack. Westmoreland (who penned the script opposite his late husband, Richard Glatzer, and Ida and Disobedience screenwriter Rebecca Lenkiewicz) doesn’t merely want to rehash the life and times of uncredited landmark author Sidonie-Gabrielle Colette, but to show why her resolve, intelligence, and contributions to literature matter and endure to this day.

Keira Knightley stars as Colette, a young woman from a French town in Burgundy and family of some means who marries Willy (Dominic West), the nickname of celebrated popular author Henri Gauthier-Villars. Not long into their marriage, Colette gets word that her husband has been carrying on with other women. Surprisingly, it’s the couple’s tenuous and dire financial situation that drives more of a wedge between them. Willy hasn’t sold or published a successful story or novel in quite some time, frequently passing off the work of other writers as his own. Driven by a desire to keep them out of the poor house, Colette comes up with the character of Caludine, an attractive Parisian school girl whose series of adventures would take the literary world by storm. After initially having little faith in Colette’s concept, Willy is quick to take all of the credit for the success of the Claudine stories, turning his wife’s creation into a marketing juggernaut. Their marriage was an open one, with Willy frequently sleeping around and Colette becoming increasingly attracted to other women. While they’re more or less up front about their infidelities, the business side to their publishing arrangement will arguably push them to a greater breaking point.

Westmoreland (Still Alice, Quinceañera), working on a much grander scale than his previous projects, packs Colette with the sort of sumptuous details that befit a European turn-of-the-century drama. The musical score is appropriately classical and soaring. The cinematography is appropriately lensed with a balance between hyper-detailed clarity and dewy eyed romanticism. The costumes are ravishingly stylish. Almost all of the English speaking cast members speak sans French accents despite the film’s setting. The production design and decor are dripping with appropriate levels of opulence. To the filmmaker’s credit, Colette is less interested in the fine details of everyday high society living and sexual inequality and more keen to examine how the film’s titular character suffered through the same struggles many female artists, authors, and creative types suffer through today.

Colette singlehandedly invented the coquettish schoolgirl trope, and no matter how twisted, cliched, or misappropriated her contributions to literature would become over time, the proper credit that was due largely never arrived in her lifetime. Whenever Colette attempted to get her own writing published, she was either rejected or given horrible deals that were designed to mitigate risk on behalf of her unenthusiastic publishers. When Willy notices his wife’s talents, he sees a way out of financial ruin for the both of them, but more selfishly as a chance to re-establish himself as a highly sought after author. Colette isn’t just a film about same sex and open relationships, nor is it merely a film about gender inequality in the early twentieth century. It’s a film that takes our modern definition of branding and presents the viewer with a case study to suggest that these discussions about what a female artist should be have been going on in a similar fashion for well over a century. Claudine was a brand, but Willy was the public face of it, not the actual creator of the property. 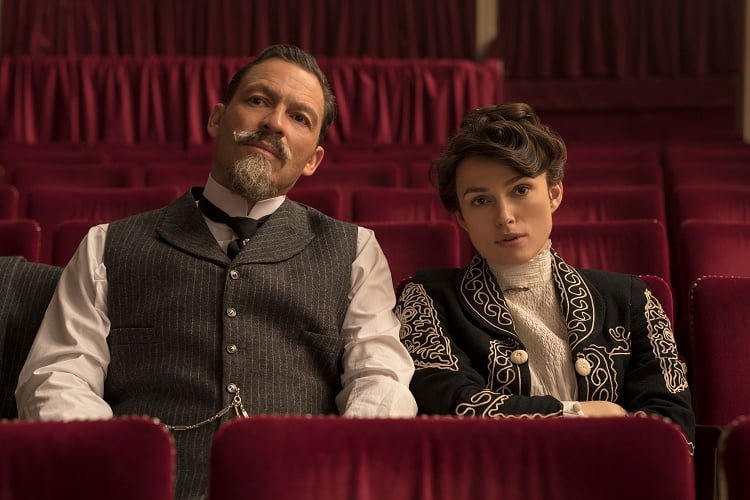 Such a modernist approach means that Westmoreland’s Colette boasts a less insufferably stuffy quality and moral posturing that can cause similarly themed period pieces to languish. There’s a relaxed and lived in quality to Colette that allows viewers to take the characters as flawed and engaging human beings first, relegating their status as period icons to the background and only broaching such subjects whenever the characters reach their financial and moral breaking points. It might seem strange by modern standards that a woman who’s so obviously attracted to women would stay with a philandering charlatan, but the keenly realized screenplay makes such a leap seem plausible, and even loving and caring at some points, offering the actors plenty of emotional material to work with.

Knightley hasn’t been gifted a role this fruitful in several years, and Colette offers a reminder of what she’s capable of as a performer when paired with the right material. Knightley’s Colette never wavers or whimpers when things get tough. She’s a proactive presence when it comes to her professional dealings, and a remarkably empathetic soul in her romantic partnerships, particularly in a flirtation with a visiting Louisiana debutante (Eleanor Tomlinson) and a more controversial relationship with one of the first openly queer actresses of the era (Denise Gough, who’s so great in her small role one hopes for a spin-off revolving around her equally significant historical character). Knightley balances poise and period appropriate social tics with the character’s pronounced interpretation of the difference between right and wrong. It’s a turn that’s equally delicate and forceful whenever Westmoreland needs to switch tones, and one of the best performances of Knightley’s career.

She happens into a great scene partner alongside West, who’s never been better. In West’s hands, Willy never becomes a fully trustworthy character, but he always remains a curiously and intriguingly slippery one. Playing an author who has coasted through most of his career by putting his name to things he never created in the first place, Willy is self-aware enough to know that he operates in a duplicitous manner, something that complicates his marital relationship. He often seems willing to grant Colette some modicum of sexual freedom in exchange for her turning a blind eye to his marital indiscretions, but if the line between pleasure and business starts to get crossed, Willy is prone to lashing out in childish outbursts. Willy’s clearly the villain of Colette’s life story, but Westmoreland and West have imbued what could have been a one note lout with a great deal of complexity and intriguing contradictions. Willy isn’t a subtle character in his personal life, but there are plenty of novel and insightful touches to this depiction of him; the rare example of a controlling cad who understands fully well where the butter on his bread comes from.

Perhaps Colette doesn’t go far enough in its depiction of what it was like to be a high society “kept woman” balancing a professional career at the turn of the century, but that’s not the primary intention of Westmoreland and his cast. The goal here is to showcase how Colette’s difficulties in gaining ownership over her successful, populist art has remained as difficult today as it was in the titular figures era. It’s a period piece with an eye firmly fixated on the present, and the refreshing nature of Westmoreland’s approach is deeply appreciated and significant.

Colette opens on Friday, September 28, 2018 at Cineplex Varsity and VIP Cinemas in Toronto. It expands to other major Canadian cities on Friday, October 12.

Check out the trailer for Colette: