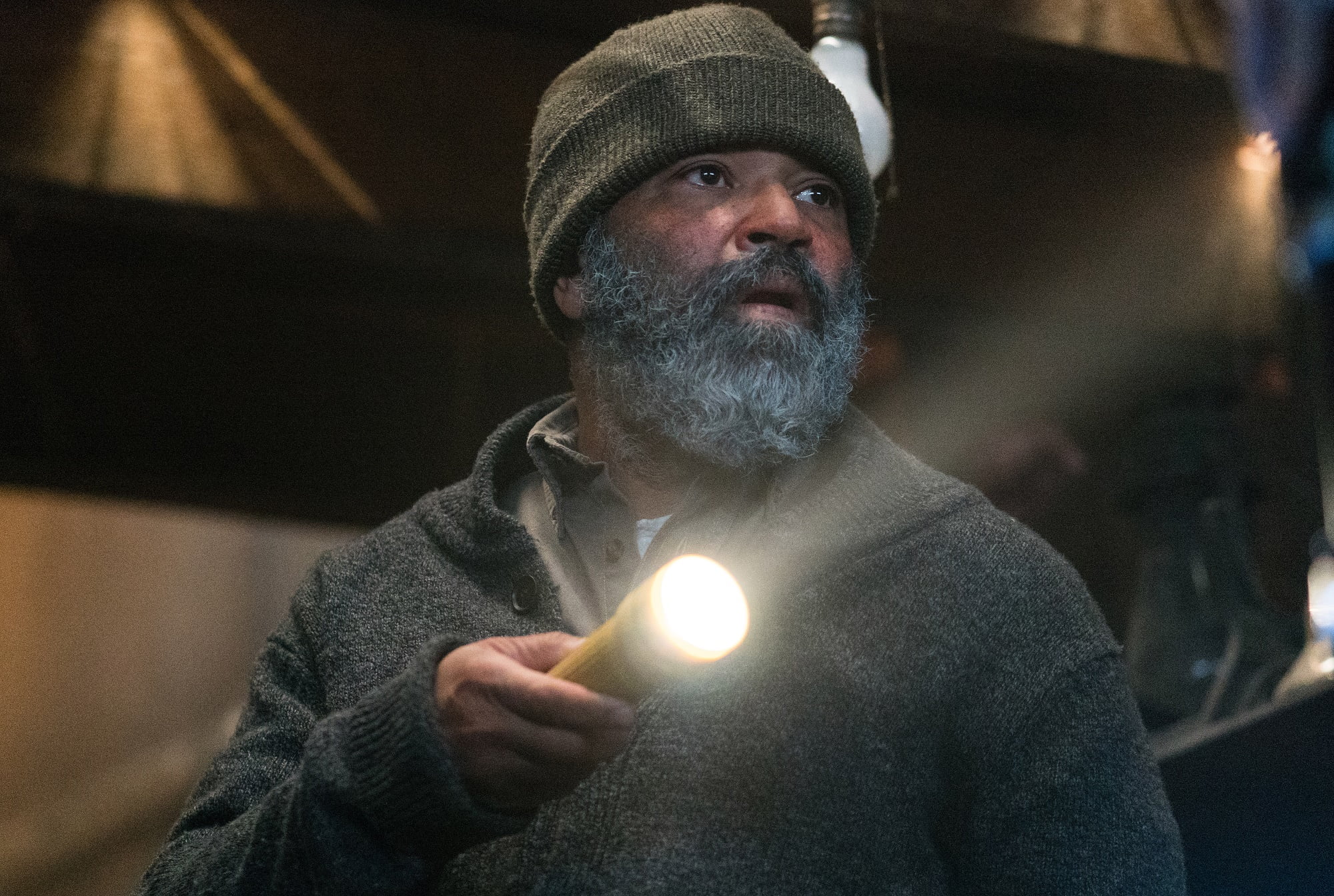 Although Jeremy Saulnier has made a name for himself directing two of the most celebrated thrillers in recent memory (the atypical revenge picture Blue Ruin and the punks versus neo-nazis siege movie Green Room), his latest effort, the beguiling and haunting Hold the Dark, represents an artistic quantum leap for the filmmaker. While retaining Saulnier’s previously established ability to control tone and setting and his unparalleled way to make violent acts feel shocking and impactful, Hold the Dark is a film that’s unafraid of getting strange, elliptical, and metaphysical with the audience. Working in a more restrained emotional register from material that boasts a lot more ambiguity than his previous features, Saulnier makes the jump from being a great filmmaker to becoming a great artist.

An adaptation of a novel by William Giraldi, Hold the Dark takes place in harsh climates of Western Alaska. Medora Sloane (Riley Keough) suspects that a pack of wolves have taken and probably killed her toddler son. With her husband, Vernon (Alexander Skarsgård), stationed with the military in Afghanistan, Medora reaches out to retired survivalist and novelist Russell Core (Jeffrey Wright) for help in locating the boy’s body. Core, famed for having spent many years living among the wolves of Alaska, agrees to come out of retirement to give Medora some sense of closure, but almost immediately upon his arrival something seems off about the situation at hand. Local indigenous peoples refuse to offer any assistance, suggesting that the mother has been possessed by malevolent spirits that should be left alone. The intensity of Russell’s situation escalates when Vernon returns home from the war, sparking off a violent chain of events that the tracker and a local sheriff (James Badge Dale) never could have predicted.

Once again working from a screenplay by close collaborator Macon Blair (who pops up here in a cameo), Saulnier finds himself unabashedly flourishing in Hold the Dark’s tough-talking genre picture trappings, but the challenging, often purposefully ambiguous material allows the director to add a lot of nifty new touches to his filmmaking arsenal. The pace of Hold the Dark is the slowest Saulnier has worked with to date, and it also boasts the quietest tone of all his features. For long patches of time, characters won’t say anything at all, and if they do, they speak in hushed tones befitting of the thick and frigid Alaskan air that surrounds them. In other sequences, characters will talk to each other for minutes on end about philosophical matters. Whenever Blair’s script expressly has something of importance to say, Saulnier gets out of the way of his highly qualified leads and lets them guide the material. Whenever Saulnier is called upon to provide the visual storytelling, the images captured by the director and Danish cinematographer Magnus Nordenhof Jønck (Lean on Pete, A Hijacking) are some of the most stunning and stirring of the year. Saulnier also isn’t afraid of letting the film’s stunning production design and lived in costumes do some of the talking for him. The partnership between Blair and Saulnier has been fruitful and productive to this point, but Hold the Dark represents a major artistic step forward in both of their careers.

Hold the Dark feels like a thriller that pulls improbably and simultaneously from the works of American impressionist Terrence Malick (most notably Tree of Life and The New World) and British genre experimenter Ben Wheatley (most notably Kill List). Saulnier holds the natural world and the spiritual beliefs of indigenous peoples close to his story’s heart here. Saulnier always takes a few moments extra examining the land around his characters (be it Russell in Alaska or Vernon in Afghanistan) to showcase it in all of its gorgeous and potentially doomed glory. As the story progresses and grows considerably more twisty, the story’s roots in Yup’ik tradition and belief slowly start to take centre stage (especially the use of ceremonial masks). Hold the Dark remains a genre exercise at heart, but Saulnier displays a fearless quality here to showcase storytelling influences that few others in similar fields would ever have the ability or talent to approach with any degree of delicacy and sincerity. It’s almost too elegantly composed for fans of lowbrow genre efforts to embrace it, and too gruesome for art house enthusiasts to celebrate it, making Hold the Dark a unique, daring, and borderline experimental piece of outsider art that’s purposefully designed to beguile viewers. 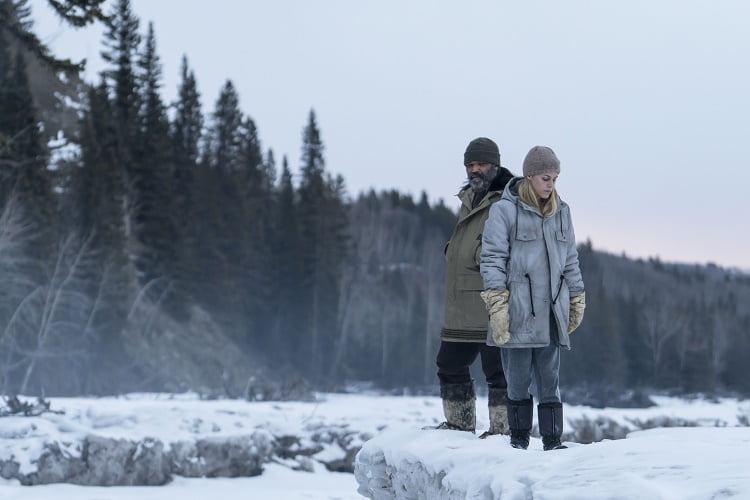 Amid all of Saulnier’s newer artistic accomplishments, he still proves to be a director capable of shocking audiences like few others from this current generation of filmmakers. Hold the Dark’s hushed and sometimes eerily quiet tenor makes Saulnier’s explosive and frequently unexpected violent outbursts carry a lot more emotional and performative weight. Like Green Room, Blue Ruin, and Murder Party before it, Hold the Dark boasts some impressive, quickly escalating set pieces that handle violence with appropriate amounts of tension and gravity. Saulnier isn’t a filmmaker that’s afraid of spilling blood, and while many of his works have high body counts, he won’t do so unless there’s a reason for it. He’s a filmmaker who makes movies about people drive to or driven by violent impulses, but he doesn’t use such characteristics to simply goose a reaction out of the audience. Hold the Dark is no exception with an elaborately chaotic standoff with a shooter boasting a high powered machine gun taking its place as the most harrowing sequence in Saulnier’s filmography to date. Filmmakers keen on making violent motion pictures can learn a lot from Saulnier and Blair’s carefully nuanced works.

Hold the Dark suffers somewhat from a lack of character, even within the film’s unspoken and malleable margins. With the exception of Dale’s family man (a role that gives the actor his best performance to date), most of the characters are single-minded ciphers by design. It doesn’t entirely make sense until the film reaches its final reveal (one that’s sure to divide and confound many who see it if they haven’t been paying attention), but that reveal still doesn’t help the viewer understand Wright’s hero any better. While Wright puts in a typically incredible performance, not much is known about Cole outside of an estrangement to his daughter. The actor makes the character come to life through his physically demanding and detail oriented performance, but he’s a hard man to read or grow an attachment to, which harms the film somewhat once the audience is asked to start caring about his well being. It’s a slightly disappointing misstep at the film’s emotional core.

While I’m sure Hold the Dark won’t be seen by many critics as Saulnier’s most successful effort, it will certainly be noted as his most ambitious and risky effort to date. There’s something thrilling when one watches an already solid director stepping outside of what many perceive to be their comfort zone, and every frame of Hold the Dark holds that sense of engagement. Mileage will vary in the eyes of many viewers, and some might write it off as a curiosity or a misfire, but in an age where creativity and thoughtfulness are in short supply in genre fare, Hold the Dark is something worth celebrating.

Hold the Dark opens in Toronto at TIFF Bell Lightbox on Friday, September 28, 2018. It will be available to stream everywhere on Netflix the same day.

Check out the trailer for Hold the Dark:

This film screened as part of the 2018 Toronto International Film Festival.