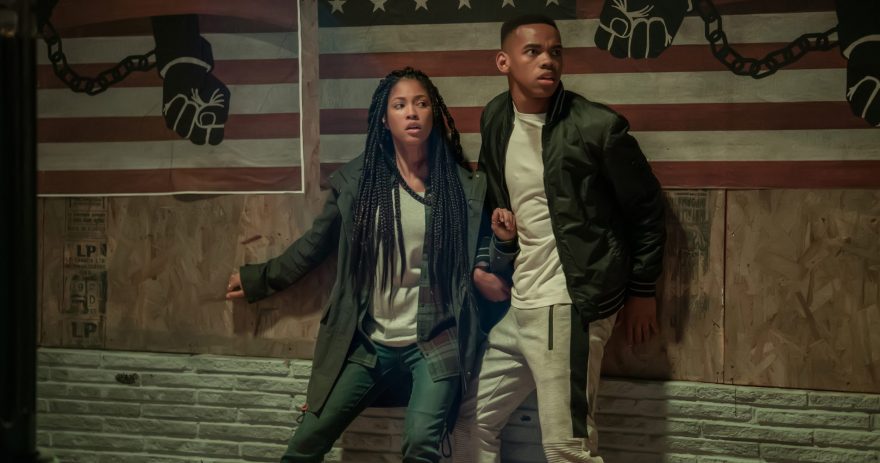 The Purge franchise takes a step back with director Gerard McMurray’s horror prequel, The First Purge, as the “New Founding Fathers of America” unleash the bloody night on Staten Island for the first time.

Actor Lex Scott Davis stars as Nya, a local activist who’s caught up in the night, and uncovers a conspiracy within the experiment, as she’s forced to survive the night and take a stand.

I spoke to Davis about making the film, how she felt about making her first horror film, and what it took to not only get the role, but put herself into the role.

The First Purge is out now on Blu-ray.

Andrew Powell: This film is really a precursor to a whole horror franchise, but it does set somewhat of a different tone in places. What was it that attracted you to doing the film?

Lex Scott Davis: First and foremost the script. The script was the very first introduction I had to it. Already was a fan of The Purge franchise alone, but the script, it’s so unique, this one, because it is the first time you see this holiday come to life. And, more importantly, we also learn how and whom it was experimented on, but beyond just the violence and the night of, there are a lot of conversations that are happening that exist in African American cultures today, just in terms of dealing with relationships and battling just becoming the product of your environment, or overcoming your environment, and sort of how can we be an activist for your community. There are so many different conversations that are happening alongside the theme of The Purge night that I thought was beautiful, and I thought what a wonderful opportunity to talk about these different topics and just observe a black and proud community overcome something extremely traumatic, and it was very powerful for me to read.

Powell: There are not that many African American-led horror movies being made. What’s the next step in changing that?

Davis: Yeah, I mean, I think this is one of the many first steps. Get Out is another example. BlacKkKlansman is another example. There’s so many powerful films being made that are thrillers and are in the horror genre, but they’re saying something more than just slasher films. And that’s what unique about it.

The fact that there are African Americans leading it is a whole other thing, but I think it’s already taking place, basically to answer your question. It’s already happening. This is a step forward.

And, alone, but then taking race and everything out of it too, the fact that it’s in right now, for lack of a better word, to have horror and thrillers that mean something more than just sort of the surface level scare–here’s a monster and he pops out. I love that, everyone is taking risks, filmmakers are taking risks right now, and making it a little more political, and making it a little more in your face and a little more relatable to the average American whose watching it.

It’s not necessarily relatable to be chased by a monster, but it is relatable to watch these characters from all demographics, all walks of life, deal with average day to day things that just happen to be set in a scene that is terrifying, which makes people come to see it.

We want to see something that’s more exciting than our average day at work. You know what I mean? You wanna have an entertainment element to it. Again, the risks that these filmmakers are taking right now, and to really use the voice that we’ve always had, it’s just now we’re discovering to use it in a different way.

Powell: Well and it’s really refreshing the fact that this is a part of a franchise, and I mean franchises aren’t known for risk taking or going off and doing something very creative, but this feels like a creative expansion.

Powell: Was it daunting working on your first horror movie?

Davis: Yeah. It’s so crazy, ’cause I love it. It’s definitely by far my favorite genre. When I turn on Netflix, I’m looking at thrillers or horror films. But to actually have the chance to be in one is a whole different ball game.

Yes, it’s a dream come true, but also a huge challenge, because I’m still used to being on the other side when it’s already edited, when the music is already there, the jump scares, the big dun dun, you know all of the things that go into making the audience members scared, I didn’t have. I didn’t have those things. I just had me and my scene partner and my stunt man, and we rehearsed when the monster’s gonna pop out, or who’s gonna go where when it happened. So it wasn’t scary at all for me, it wasn’t.

Granted, the set was eerie. However, you know, it’s just taking you in the BTS side of things. You have at least 30 to 50 camera crew men on set with you at all times. You have your staff not too far from you. There’s an awesome snack table. So you kind of forget you’re in this scary land. And again, just having to rehearse all these things, you know when the scary thing’s gonna happen.So what was most challenging for me was not anticipating when the thing was gonna happen, and have to really act as if I didn’t know what was coming, and it’s like “Oh my god, acting is so hard.”

It was definitely a huge challenge for me to now be on the other side when there is no background music, there is no creepy sounds in the distance. It’s all pretend for the actors, it’s just cut together. I remember the first time I watched it, I watched it at the [inaudible 00:07:11] and it was just us and a few reps in a small theater and we were just blown away, by the time it was all put together, it was like “Ha, this is all worth it.” It’s all worth it in the end. And it’s exceeding our expectations by the time we were able to watch it with an audience.

Davis: Yeah, he’s a huge up and comer. A cool experience, just because this was also his first studio feature film, so we kinda had that in common. And just, again, bringing a different type of element to a mainstream audience, you know what I mean? He’s coming from something a little more independent, a little more, you know, he can do what he wants before. Whereas you’re coming into this Universal film machine that’s already existed, and trying to fight for things that would technically probably only be shown in independent films, so then it’s that conversation.

So it was cool to have those two worlds collide, and just watch them unfold and be able to work off of each other too. He’s a director who definitely wants to make sure his actors are comfortable, and making sure that things are still organic.

And even the dialogue, we definitely had an awesome script, but then on the day, we’re adlibbing. We’re adding little things or taking things out that are a little more nuanced, that bring that New York, Staten Island flair to it all, that make it really authentic. And how would a black woman from Staten Island say these things, you know what I mean? And keeping it more grounded was really important for him. And all of the actors could truly appreciate that.

Powell: That’s great. Well, in terms of playing her, was there something you fought for to do in the film or to bring forward out of the character that maybe wasn’t there before?

I think I’d gone in maybe four to five times to paly this role, and I fought for myself.

After I read this script, I believed that this was my story to tell, and I wanted to do this story justice and serve women like Nya justice when portraying them, because there’s a Nya in every city, in every small town, and I just believed that I was capable–more than capable–in bringing this character to life and making this character relatable. But it was not easy to get there. It wasn’t.

I had to prove myself. I had to, you know, just try several different ways, with different executives, and really just showing I’m raw. I didn’t wear any makeup throughout this process. I just kind of showed up authentically Lex, inside up, as much as I could give, and relate to Nya and put her to life.

But once I got through that, once the role was mine, which I remember like it was yesterday finding out it was mine; I cried like a baby and called my parents. Once it was mine, that’s when it became like, okay, I’m here for a reason. All of these things, these qualities of Nya now feel innate. They feel like me, and they feel like I was born with them, so that part became easy to continue to develop her throughout the dialogue. But it definitely was a fight getting there for sure.