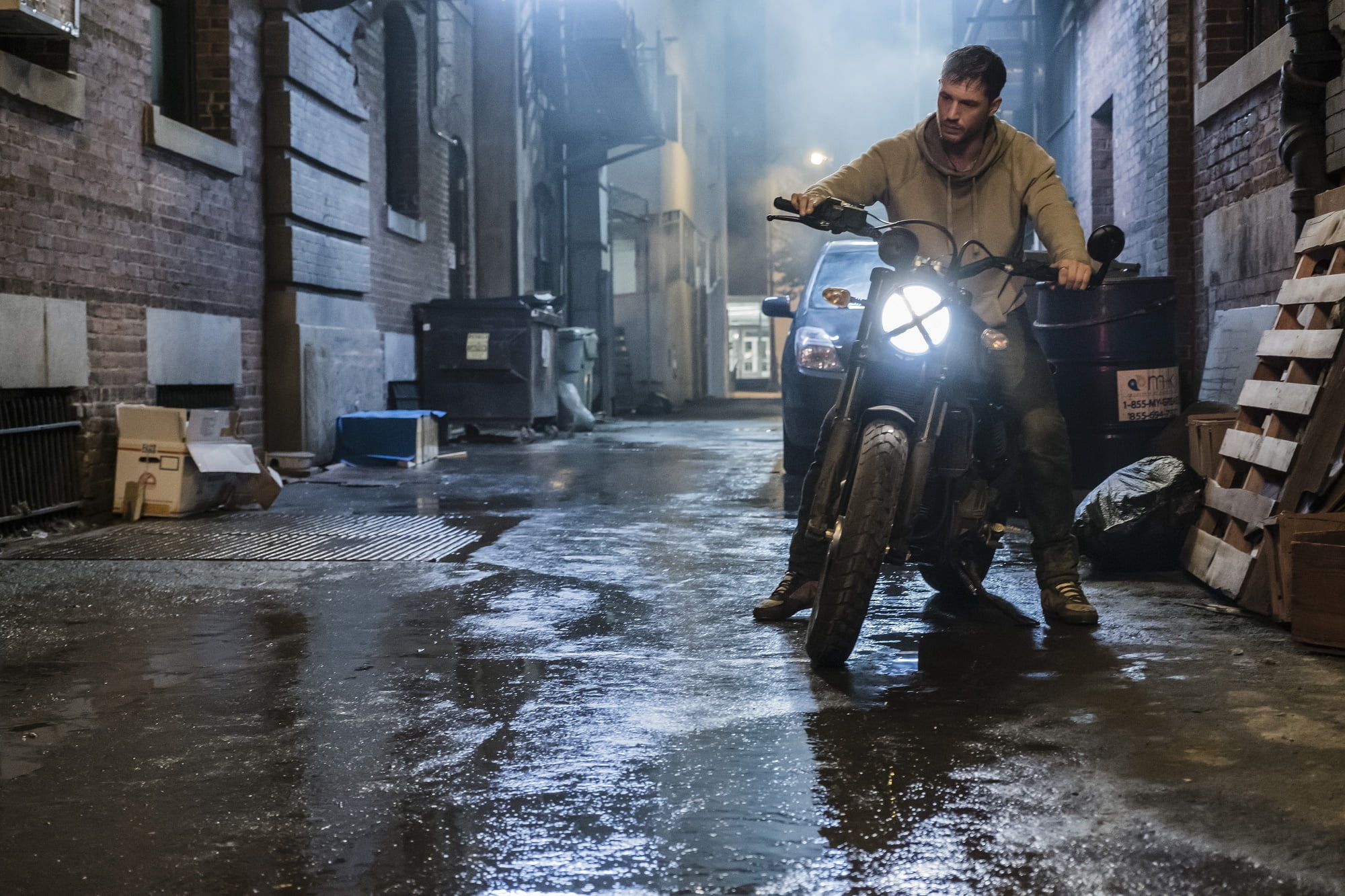 Marred by a clear, obvious, and marked series of poor decisions throughout the filmmaking process, the standalone, antiheroic Venom movie will disappoint fans of one of Spider-Man’s greatest nemeses to no end, and will leave casual observers of comic book films half-heartedly shrugging in apathy. Director Ruben Fleischer’s unnecessarily neutered take on one of Marvel’s most frightening characters has some moments of genius peppered throughout – mostly thanks to leading man Tom Hardy’s admirably “game for anything” performance – but it’s a mostly drab, forgettable affair that’s chaotic in all the wrong ways.

Hard nosed, San Francisco based investigative journalist Eddie Brock (Hardy) has a reputation for being difficult to work with, having previously been chased out of New York for his somewhat unethical practices. His career as a network reporter with his own newsmagazine comes to a screeching halt when he attempts to expose Elon Musk-esque industrialist and pharmaceutical titan, Carlton Drake (Riz Ahmed), as a power hungry sociopath who recruits impoverished and disenfranchised people to act as guniea pigs in fatal, experimental trials designed to test the effectiveness of drugs used to help human beings survive life in space. Drake uses his power to effectively blackball Eddie from getting any work, and the reporter’s snooping also results in the ending of his engagement to one of Carlton’s lawyers (Michelle Williams). Months after losing his gig and unable to find work, the increasingly cynical Brock is approached by one of Drake’s chief scientists (Jenny Slate, completely and utterly misused and underutilized). Disgusted and afraid for her life, she tells Eddie that Drake has been experimenting with alien symbiotes that came to Earth on a crashed rocket returning from space. While snooping around Drake’s laboratories, one of the people infected with the symbiote comes into contact with Eddie, spreading the parasite into the reporter’s body. The infecting alien begins to take over Eddie’s mind and body, turning him into a hulking, super-strong, voraciously hungry, lightning fast, and virtually indestructible monster with a penchant for biting the heads off his enemies and a dislike for fire and high-frequency noises.

Venom is yet another comic book origin story, which means that Fleischer and his team of four screenwriters take their sweet time getting around to any of the good stuff. This slow and steady approach makes most of Venom’s numerous and pervasive problems obvious from the outset. No matter how large the film’s budget or how talented the cast members, a film pitched in the enormous and ill advised middle ground between gruesome and wholesome is doomed to fail if the material and the director’s chops aren’t up to snuff. It’s quite reminiscent of another attempt to recreate one of comic creator Todd McFarlane’s works to the big screen: Spawn, only this time without the cheesy, dated, and borderline incompetent charm that makes watching that film somewhat of a guilty pleasure.

Venom makes the mistake of wanting to turn its title character – who predominantly started out as a villainous figure in the comic book realm – into a roguish, wisecracking antihero. Not only does this go against what audiences would likely be expecting from any early Venom adaptations, but it drains any sort of drama from Eddie Brock’s internal struggle for humanity. The character of Eddie Brock is set up from the outset as a tough talking, morally fluid, but mostly likable and kind-hearted chap. Once Venom is introduced into Brock’s increasingly fractured psyche and rapidly decaying physical body, the alien symbiote is portrayed – in the film’s own words – as a barely effective loser among his own people who wants to prove to the universe that he’s a fully capable badass. Neither setting for Hardy’s character is particularly sound because they’re both basically good dudes, only one of them has a taste for ultraviolence (within the film’s PG-13 parameters, which are still bloody, but never gory or gross).

Antiheroes are hard to translate to the big screen because they’re only as strong on screen as the good or evil forces they’re put into opposition with, and that seemingly simple battle is where Venom suffers the most. Ahmed is an impeccably skilled performer. Check out his performance in The Sisters Brothers, which opens in Toronto this week and expands in the coming weeks, or his supporting work in Nightcrawler for perfect examples of his talents. While the idea of creating a timely villain who has built his empire on cheap, disposable labour and has dreams of space exploration is a solid one, this is the kind of bland and ineffective sociopath that no one will remember once the film has ended. Ahmed plays Duke straight-laced and serious, only allowing for a few darkly comedic beats to creep into his performance in the final act, by which point such flourishes are too little, too late. Carlton Duke, despite all his wealth and power, never once comes across as an impediment to Eddie Brock and Venom, let alone as a threat to the rest of the human race. It’s a rare bland performance from the usually charismatic and intense actor, but there’s not much in the script for him to work from in the first place, especially compared to the work Hardy delivers.

Hardy’s jocular, humorous, and borderline slapstick performance is bound to be divisive, particularly among genre and comic book purists, but it works exceptionally well for the material the actor has been given. In some of the film’s finest moments – like Eddie voraciously devouring a bag of frozen tater tots or leaping into a lobster tank to treat the creatures as his own personal buffet table – Hardy’s performance hearkens back to Nicolas Cage in Vampire’s Kiss, a turn so off-the-wall that it has gained legendary status. Fleischer doesn’t let Hardy completely run in that direction with the character, but maybe he should’ve. Even when the story, script, and action are at their most boring and rote low points, Hardy injects the film with much needed levity, camp appeal, and charm. Hardy and Williams – who has a thankless role, but plays off her co-star gleefully – are the only people who seem to believe this movie is supposed to be any fun.

I would say that Fleischer is out of his element here with the mega-budgeted Venom, but to say so would mean that he was much of a filmmaker to this point in the first place. The first and most successful film in his career, Zombieland (which has a sequel on the way), feels almost like a fluke in hindsight, and that film was always more memorable for its script and cast than it was for its direction. 30 Minutes or Less and Gangster Squad were borderline incoherent messes that were chopped down to almost nothing in the editing room. Venom boasts the easy appeal of Fleischer’s first film and all the technical and storytelling problems that damned his other two feature efforts.

Venom doesn’t flow at all. Scenes smash into one another without any transitioning whatsoever. The editing is frantic and almost nonsensical, which doesn’t help with Fleischer’s inability to mount creative or elaborate action sequences here. What action there is on display in Venom is the worst to be glimpsed in a major studio picture this year. Cinematographer Matthew Libatique has proven his greatness working on the films of Darren Aronofsky and alongside Bradley Cooper on this week’s stunning A Star is Born, but he’s the wrong choice for Venom. The cinematographer’s love of close-ups makes everything look faker and more artificial, forcing Fleischer and the editors to cut the film in such a way that the images are incomprehensible whenever things turn chaotic. There are only a handful of large scale action scenes, but they’re Transformers: Revenge of the Fallen levels of indecipherable and headache inducing. One almost wishes the entire thing were a character drama instead.

On top of that, there’s a lengthy list of little detail oriented touches that fail, and they all add to the overall disappointing vibe of Venom. Most of Eddie and Venom’s jokes aren’t funny, and the only chuckles tend to come from Hardy’s physicality. There’s a wealth of side characters played by decent actors competing for screen time, despite the fact that they’re all one note and make no impression, including Slate’s concerned doctor, Scott Haze as a henchman, and Reid Scott as Williams’ helpful new boyfriend. The humour seems to come out of a lack of anything better to do, like a flop-sweat drenched performed trying to not-so-casually tap dance their way off stage. The musical score is bafflingly out of place, and the Eminem song that plays over the closing credits is one of the worst things the hit-or-miss rapper has ever produced. There are a pair of post-movie stingers, one of which will get comic fan pulses racing while simultaneously crushing them, and the other a glorified commercial (which is the better one, in all honesty). There’s even an off-putting anti-immigration subtext that’s definitely there, but I think the filmmakers were too distracted to pick up on or realize they were creating.

There are likable moments in Venom, but there are too many bad decisions that stop the film from being the fun and edgy popcorn movie it should’ve been. There’s a kernel of a good idea here, but nothing that ever flowers and grows into anything usable. It doesn’t seem to have been made for any reason beyond someone over at Sony still wanting desperately for Venom to become the next big franchise. In some ways, this feature length take on the character is worse than his much derided appearance in Sam Raimi’s Spider-man 3. Hardy might be a better actor more comfortable with wise-cracking malevolence than Topher Grace was, but at least Raimi’s Venom felt more like the character from the comics. He’s somehow even more uninteresting in his own movie than he was as a supporting character in an overstuffed movie. Until someone gives a filmmaker the reigns to the character and lets them do whatever they want, any film featuring Venom as a major player is destined to underwhelm.

Check out the trailer for Venom: