Private Life, the latest film from writer-director Tamara Jenkins, broaches a number of difficult and awkward conversations with grace, overwhelming empathy, and unflinching authenticity. The core subject matter – infertility and the strains it places on a marriage – has provided fodder for plenty of comedies and dramas across the history of cinema and television, but rarely has a filmmaker been able to take that topic and marry it to bigger issues outside of a relationship. It’s a mature, character driven, observational comedy that has universal relevance beyond appealing to parents or those who want to become them. Although it takes place among a group of intellectual New York City elites, the struggles they face (financially, biologically, emotionally) are all instantly recognizable and relatable. Anyone expecting a broad, witty comedy about a couple navigating sticky waters will immediately be floored and taken aback by what Jenkins and her cast have been able to accomplish with Private Life.

Married writers Rachel (Kathryn Hahn) and Richard (Paul Giamatti) are both on the wrong side of 40, and their attempts to conceive a child have never yielded a successful pregnancy. Rachel doesn’t produce enough eggs (and doesn’t have many left to begin with), while Richard only has one testicle that unfortunately has a blockage. Hormonal treatments and various fertilization options never work, and adoption notoriously takes a long time and requires a lot of hoop jumping. Even with adoption on the table as an option, Rachel clings desperately to the idea of carrying a baby to term herself. Exhausted and unsure of their next approach, they turn to Sadie (Kayli Carter), their step-niece who’s having a hard time cutting it as a writing student in university. Not wanting to return home to her perpetually on edge mother (Molly Shannon) and oblivious step-father (John Carroll Lynch), Sadie takes Rachel and Richard up on a standing offer to crash in their living room for a bit. Rachel and Richard gently and awkwardly approach Sadie about donating some of her eggs to help them conceive (which they intend to pay generously for, not receive for free). To their initial joy, Sadie says yes to helping the couple out, but the plan drives a wedge between the young adult and her mother, and the pressures of producing enough eggs for IVF to work places immense physical and emotional strains on everyone involved.

With her first feature film in over a decade, Jenkins (Slums of Beverly Hills, The Savages) proves once again to be a masterful observer of human behaviour in all its equally beautiful and ugly glory. While Private Life might be Jenkins’ most personal project to date (drawing on many of her own difficulties in going through similar fertility processes), the film retains her unparalleled ability to create realistically flawed and empathetic characters and her desire to let their problems play out as naturally as possible. All the primary characters in Private Life are likable people that audiences will want to love and support, but they’re all capable of saying or doing things that are selfish, catty, or hurtful whenever they’re backed into a social corner or stuck in an emotional rut. The characters in Private Life don’t lash out against one another unnecessarily. They collide only out of exhaustion, frustration, and disappointment. They love each other unequivocally (maybe with the exception of Hahn and Shannon’s characters), and they ride through life together without judgment of one another. They’ll vent and argue, but Jenkins never plays their problems as something that would ever end the love between them.

When the viewer first meets Richard and Rachel, they’re already at the end of their rope. Through Jenkins’ writing and the impeccable chemistry between Hahn and Giamatti, there’s a distinct sense that if this couple were to break up, they would have done so long before battling this deep into their fight to have a child. They are stronger together, and while their relationship isn’t co-dependent, there’s a distinct feeling that they’d fall apart if they didn’t have each other. They aren’t broken or breaking, no matter what their doctors and Sadie’s narrow minded mother try to suggest. They’re simple, exceptionally smart and loving people who are simply and exceptionally tired of having their emotions trampled upon. 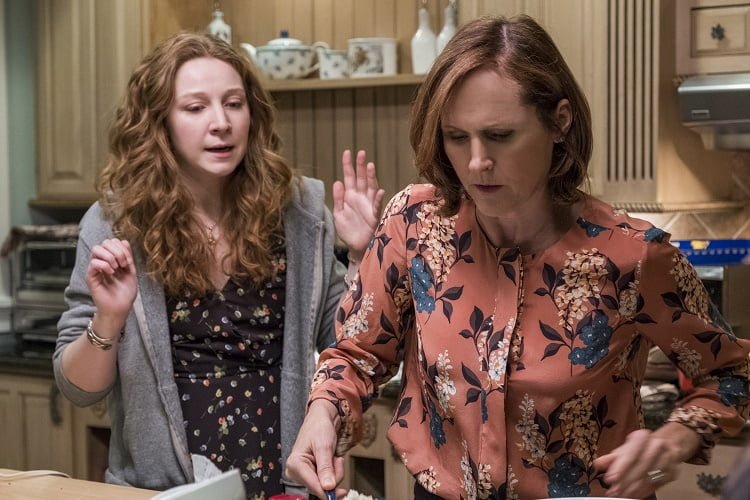 Jenkins script boasts an ambitious, atypical structure. While it’s told in a linear fashion, Private Life takes a great deal of time following Richard and Rachel through each progressive disappointment in a bid to show the viewer how tiresome and frustrating their lives have become. The struggles feel painfully realistic and nuanced, and there hasn’t been a film that has so closely and articulately depicted the lengthy, sometimes soul crushing process of dealing with fertility issues. If one of the avenues towards having a child succeeds, Jenkins’ approach will yield a wonderful payoff for audiences sticking by the characters in their time of need. If all of these approaches, treatments, and procedures fail, Jenkins has already used her film’s delicate tone and structure to prepare the audience for and process further disappointment. No matter what the outcome of Private Life, the viewer will be riveted the entire time because Richard and Rachel are people worth rooting for and supporting. It’s not a rousing film designed to be an outright crowd pleaser, but Jenkins makes the viewer feel welcome into this awkward world, allowing them to be a silent and restrained cheering section for the characters to lean on when they have no one else to turn to.

It should go without saying that such an elaborately constructed relationship requires two outstanding talents to pull it off, and Hahn and Giamatti respond to Jenkins’ material by turning in some of their career best work. The perpetually underrated Hahn portrays Rachel as a bundle of nervous, genetically modified hormones and emotional tics. She has lots of love to give and her work as a writer no longer provides a suitable outlet for her feelings, and Hahn (who’s normally associated more with broad comedies) disappears into her character’s crawling skin entirely. It’s a performance of pure love and anger, and even when the character is written to be funny, not a single line of Jenkins’ dialogue or escalating situation feels out of place with Hahn at the centre of it all. As for Giamatti, he hasn’t been given a role this meaty and fruitful in years, and while Private Life (like most films about attempting to get pregnant) revolves mostly around maternal issues, he’s given the best moment in the film when Richard has watched the women in his life pushed too far by callous, aloof male doctors with little bedside manner and even less regard for the delicacy of their situation.

The biggest standout here is Carter, who deserves to become a huge star based on her notably detailed take on being an artistically minded millennial. Sadie is the type of young person that many adults would find insufferable until they get to know her. She has a literary, pop culture, or historical reference for every occasion, but she only employs them with the hope that the adults around her will take her intelligence seriously. Her jokes are corny and frequently unfunny, but she’s developing a dry wit. She’s quick to help those in need, especially loved ones, but she doesn’t understand why her mother resists such grand gestures of charity. Given what might be the most subtly complex role in a film chock full of already intricately penned characters, Carter provides added layers of emotional and narrative depth through her naturalistic approach. It’s a performance that I hope people remember across the next several months of award season chatter.

It’s nice to have Tamara Jenkins back, and it’s even better that Private Life marks her strongest film to date as a writer and director. It’s a remarkably humane and enjoyable film that finds strength, love, and humour in dark emotional places without forcing the viewer to wallow in misery. Richard, Rachel, and Sadie aren’t perfect people, but anyone would be glad to know and support them. More importantly, viewers will want to learn and grow from the strength they show because Jenkins has crafted something unique with these characters: a crowd pleaser that never once resorts to contrivance, manipulation, or grandstanding in an effort to make one root for its characters and their situations. With Private Life, Jenkins has proven that relationship dramas don’t need to be flashy or overbearing to make a major impact.

Check out the trailer for Private Life: