Gareth Evans, the Welsh director of The Raid and its subsequent sequel, successfully switches filmmaking gears with Apostle, a slowed down and initially restrained sort of period horror film. While Apostle becomes in its second half something closer to what admirers of Evans previous genre work expect from the writer-director, it’s still a formidable film that proves he has a lot more to offer viewers than well timed kicks to the face.

Dan Stevens stars as Thomas Richardson, a trainwreck of a man who, sometime in the early 1900s, returns to the home of his estranged and increasingly dementia addled father when he gets word that his sister (Elen Rhys) has been kidnapped by an enigmatic cult leader. With the family no longer in any position to negotiate for her return, Thomas goes undercover at the cult’s stronghold on the remote island of Erisden. The island commune was founded by a trio of treasonous Brits who were shipwrecked en route to their executions, and the islanders all worship a mysterious and motherly deity that’s currently cross with the lot of them, killing their livestock and destroying their harvest. De facto cult leader Malcolm (Michael Sheen) has taken to kidnapping as a last resort to earn his followers some much needed capital, now that assassins from the king’s service are growing closer and trade routes have been cut off. With the help of the kindly daughter (Lucy Boynton) of Malcolm’s chief enforcer (Mark Lewis Jones) and a teenage lad (Bill Milner) who’s illicitly carrying on a sexual relationship with the daughter (Kristine Froseth) of one of the island’s more rational leaders, Thomas investigates the cult’s endgame while searching for his sister.

Abandoning his previous films’ Indonesian settings for something decidedly more British, Evans’ latest comes more indebted to contemplative, slow burning, boundary pushing thrillers like The Wicker Man and some of the edgier works of Nicolas Roeg and Ken Russell (with a splash of American filmmaker William Friedkin thrown in for good measure). Apostle belongs to a classical sort of British filmmaking tradition that balances rural and bucolic images with undercurrents of violent madness, suggesting that the country’s very isolation can become a breeding ground for evil.  Cinematographer Matt Flannery (who shot Evans previous films) gorgeously captures emerald green rolling hills, golden, rotted out fields, ominous skies, and deadly oceans with equal parts dread and reverence, giving Evans and his cast a perfect backdrop for their nightmarish period piece. It’s another captivating genre riff from the gifted filmmaker, but within a completely different set of logistical parameters and emotional manners.

Evans takes time in letting his story and the detailed lives of the island’s inhabitants unfold. Apostle isn’t in much of a hurry to get anywhere, but Evans proves to be particularly adept at setting a perfect mood to be sustained throughout, and he’s equally careful to make sure that every sequence has some sort of meaning to the film as a whole. From time to time, Evans will let his characters’ actions unfold wordlessly, revelling in the mystery at hand and their internal and continued fracturing. The result is a film that’s lengthy and rich, but also one that moves at a surprisingly brisk and rewarding pace. 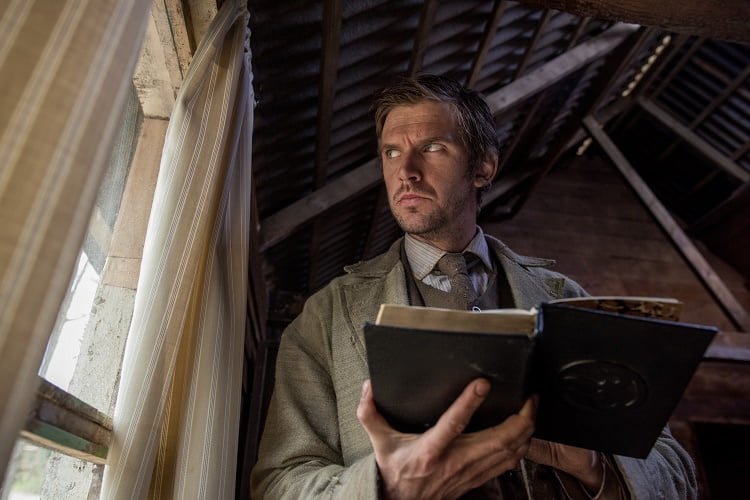 Apostle is the story of a broken man coming to an increasingly broken community, and while the cult might have ambiguously evil roots, they’ll create a symbiotic relationship that will likely destroy them all. Stevens’ only occasionally heroic protagonist skulks around with a steely eyed intensity that suggest he’s ready to snap at any moment. He’s put in opposition to an increasingly ineffective cult of personality, led by Sheen’s soon-to-be challenged prophet. Stevens makes a perfect foil for the residents of the island as a man who lost his faith in any sort of God quite some time ago, and while he doesn’t share a considerable amount of screen time directly opposite Sheen (save for a memorably tense moment where Malcolm methodically tries to suss out a spy in his ranks), they act as two sides of the same coin. Evans gives both men plenty to work with, imbuing the film with subtle nods to Christianity, paganism, and even a healthy undercurrent of ecological advocacy. Both leads take bits and pieces from Evans’ meaty subtext and craft great genre film performances from what they’re able to come up with.

Bigger reveals that explain the whereabouts of Thomas’ sister and the current state of emergency on the island aren’t particularly surprising in the grand scheme of things, but there’s still a moment where Evans is able to tell a remarkable amount of backstory with a single effective edit. Apostle functions best when viewed as an increasingly chaotic and trippy journey into the island’s heart of darkness, and around the halfway point the film picks up with the kind of intensity and shocks inherent in Evans’ previous works.

There aren’t any knock-down-drag-out brawls in Apostle, but Evans cheekily finds logical ways of throwing in a couple of brutal looking fist-fights here and there and an ingenious action beat involving a pair of spears. The blood flows freely once the intensity ratchets up, but Evans never overstates his hand, with some of the film’s potentially goriest moments left to the viewer’s imagination. With Apostle, Evans shows his ability to balance his deft ability to handle crowd pleasing high spots with a modicum of restraint. Unlike Evans’ previous films which gave the viewer everything they wanted on a silver platter, Apostle wants to make the viewer work a bit harder for their thrills.

While the chances of action hungry audiences getting another film in The Raid franchise are increasingly unlikely, it’s great to report that Evans’ future as a filmmaker remains a bright one. Apostle is the work of someone unafraid of branching out in rather extreme ways. While I doubt he’ll be making a romantic comedy or courtroom drama anytime soon, Evans displays a further mastery of storytelling and directorial skills with Apostle. It’s a film of such a specific time, place, and tenor that it won’t be to everyone’s tastes (especially the final fifteen minutes or so), but it’s a welcome change of pace for anyone searching for an equally contemporary, classical, and smart horror film this Halloween season.

Apostle is available to stream on Netflix starting Friday, October 12, 2018.

Check out the trailer for Apostle: