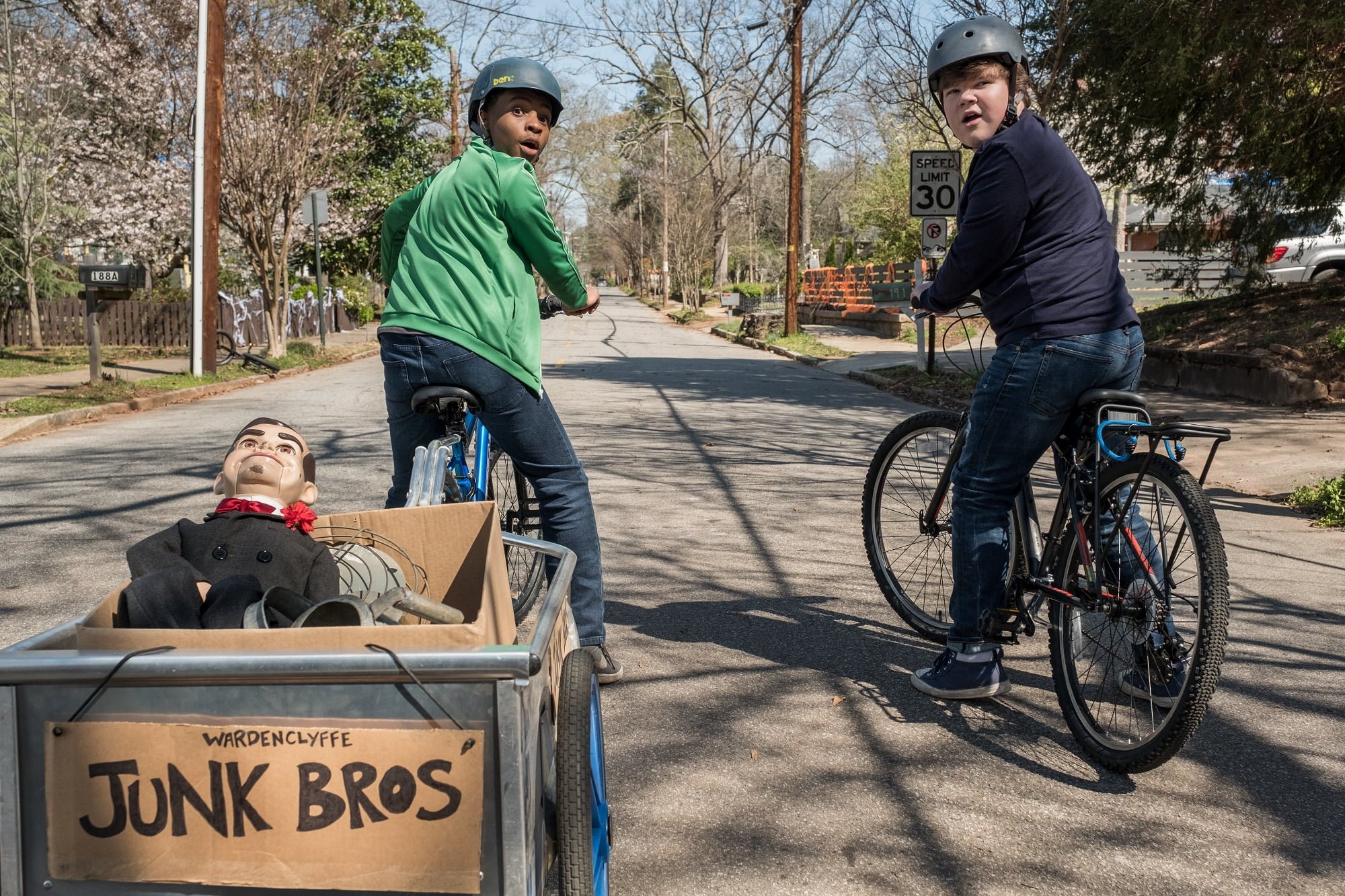 More of the same only considerably less, Goosebumps 2: Haunted Halloween does away with most of the ingenuity and fun of its predecessor in favour of a limp rehash of the first movie’s high spots that are delivered with half the ingenuity and half the energy. It’s not bad in the sense that it won’t keep the kids in the audience engaged, but bad in the sense that the first film was pretty good for what it was trying to accomplish, and this one is a pale imitation. It’s less like watching a sequel and more like walking into a lacklustre haunted house that was inspired by the first film. It looks good, but not much of it is funny, scary, novel, interesting, or even all that entertaining.

Boasting little connection to the first film based on author R.L. Stine’s popular series of tweenage horror novels, Goosebumps 2: Haunted Halloween shifts the action from the midwest to upstate New York and the sleepy suburb of Wardenclyffe. Picked on teenage science nerd Sonny Quinn (Jeremy Ray Taylor) and his best friend Sam (Caleel Harris) are trying to get a junk hauling business off the ground, and they’re contacted by a mysterious caller to clean up a house that apparently used to belong to Stine. In one of the dilapidated home’s secret hideaways, the pair find a trunk containing an unfinished manuscript by the author. They open the book (which from the first film, we curiously learn is something you should never do), and mysteriously the evil ventriloquist dummy Slappy (voiced again by Jack Black) appears out of thin air. The malevolent doll comes to life, initially playing nice with Sonny and Sam, agreeing to help them with all life’s problems if they let him become a part the Quinn family, which includes an older sister named Sarah (Madison Iseman) and an overworked single mother (Wendy McLendon-Covey). It’s almost immediately apparent that Slappy is up to no good, and that his powers to bring anything that he sees to life will be used in service of a Halloween uprising of sorts. Slappy’s powers will make every costume, lawn decoration, pumpkin, and candy come alive, and it’s up to the kids to put an end to the dummy’s reign of terror by using Stein’s book (which now functions basically as a proton pack from a Ghostbusters movie) to return all the beasts and ghosts to the fictional realm.

Goosebumps 2: Haunted Halloween makes changes on the creative side of things from the top down, and while that could be a successful approach for most franchises, it’s a kiss of death here. New director Ari Sandel (The Duff) isn’t capable of containing and building the madcap shenanigans that previous director Rob Letterman was able to mount in the first film, instead doubling down on what worked before and mostly sticking to the script. Original writer Darren Lemke (who worked from a story by veteran screenwriters Scott Alexander and Larry Karaszewski on the previous Goosebumps) gets only a story credit here, and new writer Rob Lieber (Peter Rabbit, Alexander and the Terrible, Horrible, No Good, Very Bad Day) takes over. The script this time out is a lot closer to Stein’s original books in the worst possible ways. The characters are threadbare, their plights never in question, most of the corny jokes struggle to elicit even modest smiles, and none of the ghosts, ghouls, and monsters are used to their fullest potential, even by the understandably tame standards of family filmmaking. The books had a charm where one’s imagination can make reading them a joyful, campy, and spooky experience for youngster, and the first film reflected that sort of goofy, anarchic spirit. Goosebumps 2: Haunted Halloween is a film where a bunch of stuff simply happens for the sake of having a movie.

It’s the kind of dip in quality that’s noticeable regardless of a viewer’s age. At the screening I attended, some of the toddlers in the audience were gleefully shouting out the next plot twists and jump scares moments before they arrived. Goosebumps 2: Haunted Halloween is so obviously mediocre that it couldn’t fool a four year old. These scenes of peril are well executed on a technical level, but if the script doesn’t give anyone much to work with outside of a near beat-for-beat reenactment of similar events from the first film, it’s hard to stay invested. 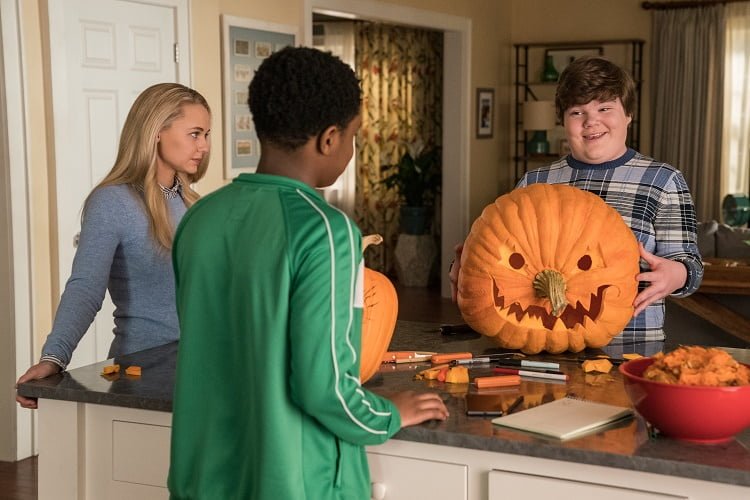 I made the haunted house analogy before, and I ask you, dear reader, if you’ve ever exited a haunted house only to re-enter it moments later. You might still be marvelling at how the creature design is outstanding, the effects are well integrated, the music is seasonally appropriate, or that the actors are giving it their all to sell the material. At this point, you’re admiring something and not being entertained by it. You know everything that’s going to happen, and you know it’s probably going to happen in the same exact order. You’re reliving how something looks, and not experiencing the same emotions you had the first time. That’s the best way I can describe how Goosebumps 2: Haunted Halloween looks and feels.

Goosebumps 2: Haunted Halloween is helped considerably by its “game for anything” cast. Iseman, Harris, and Taylor are all likable, charming presences who are worth following and know their way around one-liners rather well. Covey, one of the most underrated comic talents today, steals all of her scenes as Sonny and Sarah’s perpetually unimpressed mother. Ken Jeong and Chris Parnell are good sports, popping up for minor parts as a Halloween obsessed next door neighbour and a kindly, shy drugstore cashier, respectively. And since the trailers spoiled the film’s biggest reveal (probably since his other vastly better seasonal offering, The House with a Clock In Its Walls, has done well at the box office), I’ll say that Jack Black returns as Stein, and he’s once again the best thing about the movie, even though he only pops up for the third act and basically doesn’t do anything at all. Black has one scene where I think his character is unwittingly attempting to set a record for the biggest number of movie and literature related puns in sixty seconds, and it remains the funniest gag of the film, which is pretty great for a part that feels like it was tacked on at the last second.

If all you’re looking for is a sugar rush to keep kids satiated for a shade under ninety minutes, Goosebumps 2: Haunted Halloween will do the trick just fine. If you’re looking for anything else, all you’re going to get from this are cavities and empty calories. That would be fine if Goosebumps 2: Haunted Halloween was made with a bit more care and ingenuity, but everything here outside of the effects, production design, and performances are on autopilot here. It’s not dire, but you (and your kids) could easily do better.

But if there’s one thing I really loved about this movie it was the all too brief appearance of Terry the Pumpkin. Shout out to Terry. He was great. There should be a whole movie about him, and not the sequel that the end of this film so brazenly sets up.

Check out the trailer for Goosebumps 2: Haunted Halloween:

I agree. Terry the Pumpkin made the movie for me and my daughter.