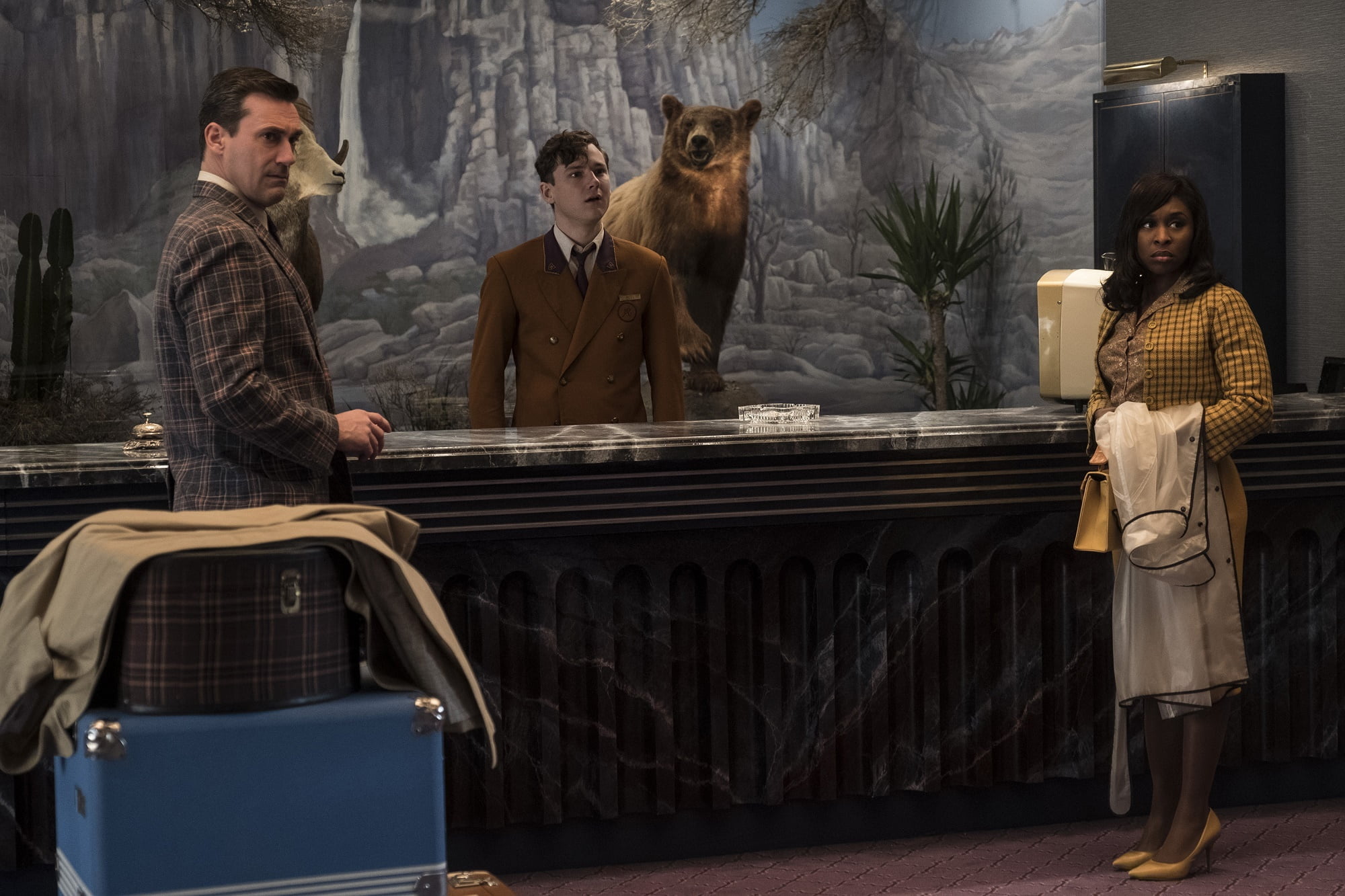 Writer-director Drew Goddard’s talky, delicately constructed, but dangerously overstuffed 60s set suspense mystery Bad Times at the El Royale is an overlong, but curiously still underdeveloped bit of entertainment that wins one over through the sheer force of the performances contained within it and a handful of good ideas. Either a couple of rewrites or a few edits away from being a genuinely decent riff on the kinds of sprawling, overlapping narratives best told by the likes of Quentin Tarantino or Tracy Letts, Bad Times at the El Royale always runs the risk of being an almost exhausting form of self parody, but its rickety construction thankfully holds together.

A bunch of people on the run from various things in their lives have converged upon a tacky, past-its-prime hotel in Lake Tahoe, where the primary selling point outside of its former hipness and decorative glory is that it’s perfectly centred upon the border between Nevada and California. They also have different, hidden motives for being there. There’s an overly chatty, braggadocious travelling salesman (Jon Hamm), a black soul singer who can’t afford a better room elsewhere (Cynthia Erivo), a forgetful priest (Jeff Bridges), and a stand-offish young woman with a nasty disposition (Dakota Johnson). Overseen by a single, perpetually strung out bellhop (Lewis Pullman), the hotel is in pathetic shape, but none of the guests are there for the sights. Eventually, their paths and motivations will cross, bringing hell down upon each other and the hotel itself.

I say that their paths will cross in Bad Times at the El Royale, but I didn’t say they would cross unpredictably. In the biggest demerit for such an intricately interwoven and dense plot, it’s known almost immediately which characters are lying about who they are. Once they start spilling the beans or letting their facades slip, their motivations are unsurprising. If their motivations are unsurprising, the conflicts that arise between the hotel guests become predictable. It’s not that the stories are necessarily bad, but rather that Goddard (Cabin in the Woods, Cloverfield) thinks they’re more clever and devious than they actually are. For a film that’s meant to be an escalating series of rug pulls, Bad Times at the El Royale is made up of a bunch of threads and obvious red herrings that lead exactly where most viewers will expect them to lead. I won’t spoil much of anything, but I will say that if you have certain specific feelings about what a character is doing, chances are you’ll probably turn out to be correct.

There’s also a choppiness to Bad Times at the El Royale, especially regarding Erivo, Pullman, and Johnson’s characters, that suggest a story and a film that has been cut down from a much longer running time or script. I’m not certain that was a good or a bad idea. Considering that Bad Times at the El Royale is approaching an already punishing length just north of 140 minutes, adding to it might not be the best option, but when the characters being shortchanged are the most interesting ones of the bunch, it’s hard to not feel like you’re being cheated out of something substantial in favour of a bunch of flashier and talkier dramatic high spots.

Goddard’s film is enamoured with dialogue and history above everything else, and again that’s to the film’s credit and detriment in equal amount. Goddard so desperately wants to talk about the significance of the 1960s in American history that he strains to fit in every scandal, noteable event, and societal ill he can into a single story. At one point, a character exclaims “Let’s have ourselves an allegory!” I openly groaned when it happened because by that point, Goddard had already hammered home about five or six dissimilar allegories before that’s line is uttered around the ninety minute mark.

Plenty of scenes throughout Bad Times at the El Royale are comprised of people sitting around and talking for minutes and minutes on end without cutting away. It’s the kind of stuff actors love and writers like Tarantino and Letts tend to gravitate towards. The dialogue is sufficiently tough, witty, and enlightening, but it’s also astoundingly self-indulgent in ways that make most critics of Tarantino and Letts similarly cringe whenever it goes off the rails. The last thirty minutes of the film basically takes place around a single setting with mostly everyone tethered to a single place. It’s a lot to ask of the audience to sit through a final dialogue dump in a film made up of nothing but such moments, but it’s sequences like this where the impressive cast Goddard has assembled are able to pick up the slack. 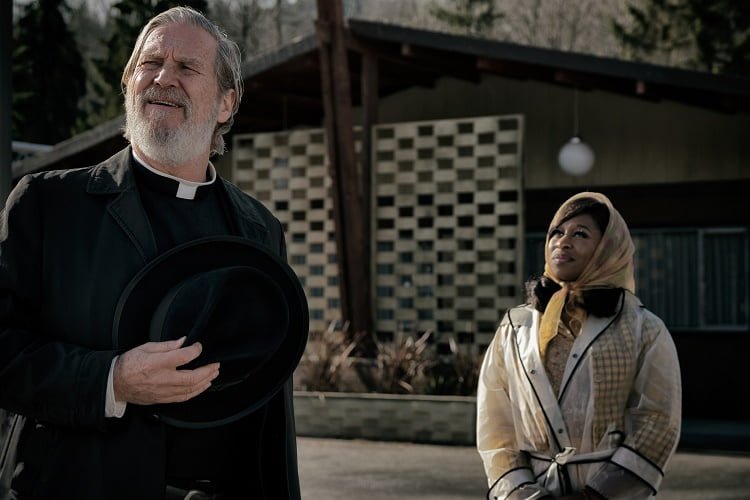 There isn’t a weak link among the actors tasked with carrying Goddard’s heavy load. Bridges works in a more restrained register than he’s been using as of late, which is a great choice considering that his less than pious priest is the type of character most actors would have played over the top. There’s a duality to Hamm’s character that Goddard puts to great use, and the actor responds in kind with some intriguing work. Johnson and Pullman are tasked with playing the most mysterious hotel dwellers, and it’s a credit to both that viewers are always wanting to learn more about them. Chris Hemsworth pops up late as an equally charismatic and psychotic cult leader who’s coming for one of the guests that I haven’t yet mentioned for fear of spoilers, and he fully embraces the opportunity to work against his usual typecasting.

But the biggest star here has to be Tony winner Erivo, as the only truly decent person among her fellow guests. With Goddard often setting some of his most memorable scenes to acapella renditions of some of the decades biggest hits, it’s a role that requires a gifted musical performer, but in the film’s more dramatic moments, she proves to be the cast member with the greatest mastery of subtlety and understatement. Here’s hoping that Bad Times at the El Royale leads to more cinematic work for Erivo.

Much like a Tarantino film, Bad Times at the El Royale is a non-linear story divided up into chapters, many of which are flashbacks that explain what brought the various characters to the hotel: a sister that was in trouble, money that’s been stashed in the floorboards of one of the rooms, a looming criminal investigation, a pushy boss, personal demons, etc. These sequences are more engaging than Goddard’s flowery dialogue sequences, and they’re well integrated respites that keep the film from falling into any major ruts. They also offer up some nice appearances by the likes of Nick Offerman, Shea Whigham, and Xavier Dolan to turn in some fine, if all too brief character work in pivotal bit parts.

While Goddard strains to keep his screenplay under control, he does manage to make Bad Times at the El Royale into his most visually accomplished effort to date. The hotel boasts plenty of fascinating and decaying period detail that’s a joy to look at. He comes up with one of the most creative ways of setting the overlapping stories into motion when one of the characters stumbles upon a secret hallway of two-way mirrors that runs behind the guests’ rooms. Even in his dialogue heavy scenes, Goddard is careful to make sure that the viewer always has something interesting to look at within the frame. It keeps the viewer captivated, even if their attention or investment starts to drift elsewhere.

I know I’ve invoked Tarantino’s name a lot when talking about Bad Times at the El Royale, and I know that plenty of other critics that have responded both positively and negatively to the film have done the same. It’s impossible not to make that leap because it’s so obvious. Ultimately despite being a blatant appropriation of someone else’s style, I do have two points that lead to me giving Bad Times at the El Royale the mildest of critical passes. First, it’s a better use of Tarantino’s signature plotting that whatever the heck last month’s Life Itself was, and secondly, at least someone has found a way to riff on newer films by that writer-director than the glut of films from the mid-90s and early 2000s that all wanted to be Pulp Fiction. That might not be saying much, but it’s just enough to endear me to Bad Times at the El Royale.

Bad Times at the El Royale opens in theatres everywhere on Friday, October 12, 2018.

Check out the trailer for Bad Times at the El Royale: