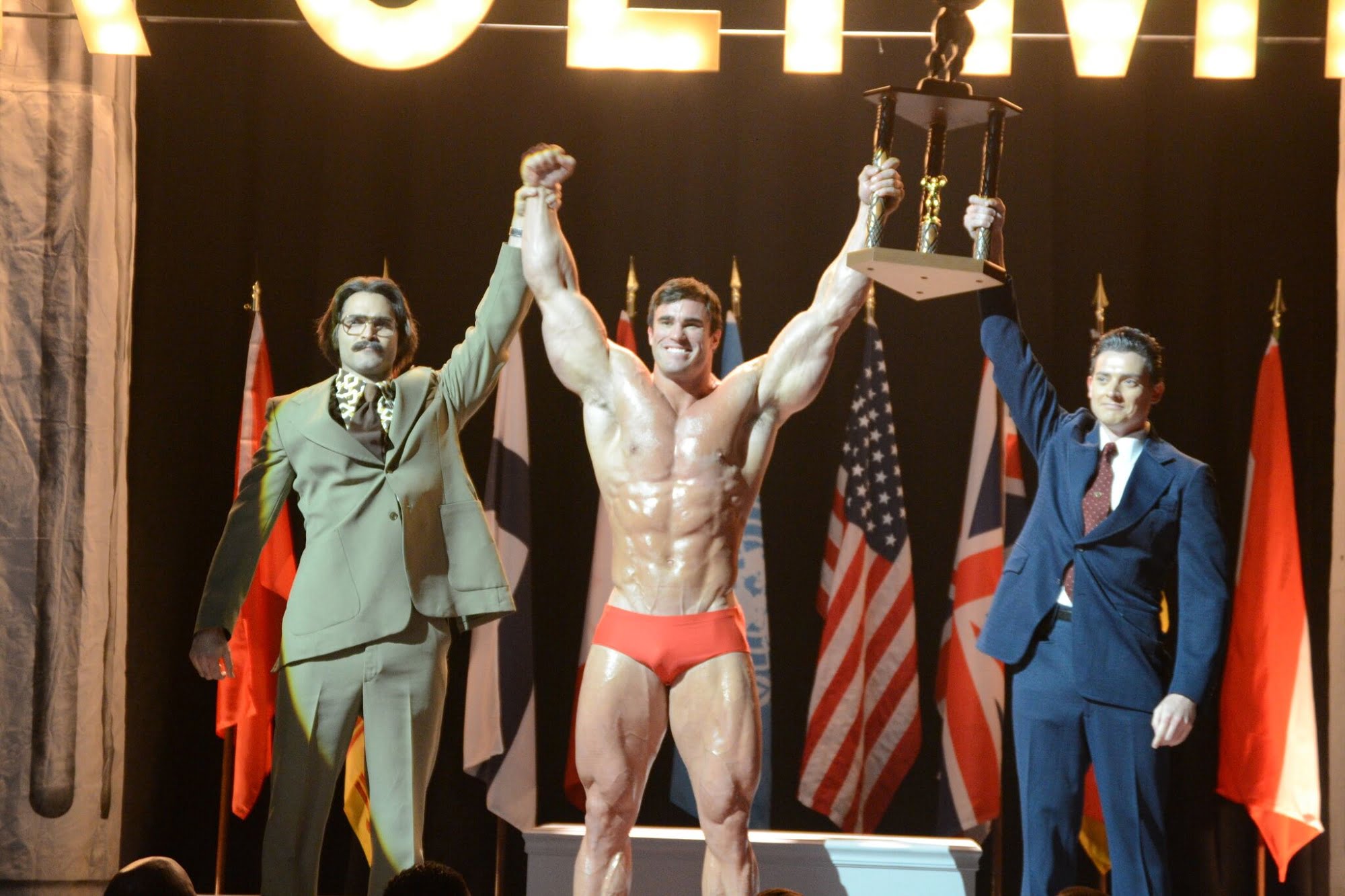 A hokey, inauthentic biopic of one of the biggest names in bodybuilding and fitness, George Gallo’s frequently risible and always unfortunate Bigger has a pair of unique leading performances and very little else worth talking about. It’s a depressing kind of misfire that one feels awful speaking ill of since it was so clearly a passion project for writer-director George Gallo, who hasn’t been involved with a great picture since the turn of the century. His credits include films as varied and charming as Midnight Run, Wise Guys, and Trapped in Paradise, but for the past twenty years, he’s essentially worked as a hired gun on forgettable dreck like See Spot Run, Code Name: The Cleaner, and The Whole Ten Yards. Bigger should represent a step back in the right direction towards respectability for Gallo, but it’s more of a stumble sideways.

Bigger opens with nonagenarian publisher, entrepreneur, and bodybuilding pioneer Joe Weider (played in advanced age by Robert Forster) being interviewed by a journalist (DJ Qualls, who has almost no dialogue and is only really glimpsed in reaction shots) prior to the funeral of his younger brother, Ben. Joe recounts his childhood, growing up as a bullied Montreal Jew in the 1930s, and his life with his emotionally and physically abusive mother (Nadine Lewington, so over the top that she isn’t frightening in the slightest) and meek father (Steve Guttenberg, in possibly the most embarrassing turn of his career). Young Joe (Tyler Hoechlin) and Ben (Aneurin Barnard) hustle their way out of Montreal, and initially go on their separate paths. Ben goes off to war, while Joe pursues his passion of drawing muscular human forms and trying to invent new fitness and nutrition regimes. When Ben gets back, they go into business together, publishing an artful magazine and managing a stable of bodybuilders. Once Joe starts becoming successful, he ignites a rivalry with Bill Hauk (Kevin Durand), a nasty anti-semite and fellow bodybuilding publisher who’ll stop at nothing to make sure that the Weiders fail.

From the opening frames of Bigger, it’s immediately apparent that Gallo’s film is the type of earnest, well meaning passion project that’s been compromised for the sake of getting the picture made. Visually, Gallo and his team of craftspeople do what they can to recreate the Weiders journey from the 30s to the 80s, but the barely disguised repurposing of modern structures for period detail isn’t fooling anybody. The budget has been seemingly cut down to nothing, which works against a story that’s rich in history, leading to a script that has to lugubriously force the actors into explaining landmark moments in flowery detail rather than actually showing them. Those budgetary slashes seem to be in service of hiring a stacked team of B-list actors who probably aren’t the best people for their given roles, but they were either friends of Gallo’s who were willing to work for peanuts or inserted so investors could have some vaguely known names they could attach their money to.

Some of these character actor choices for supporting roles work well. Forster is virtually incapable of delivering bad performances, and he gives his all in the film’s framing sequences. Colton Haynes delivers a subtle and fine take on fitness guru Jack Lalanne, and Australian actor and bodybuilder Calum Von Moger does an even better physical and verbal impersonation of famous Weider discovery Arnold Schwarzenegger. Even Tom Arnold makes the most of a stock, tough talking businessman character as Weider’s first publisher. Unfortunately, Bigger is also chock full of performances like those delivered by Lewington, Guttenberg, and Durand, who turns what should be a more subdued, malevolent, and jealous businessman into a bonkers, sneering, chortling psychopath. As for the actresses tasked with playing Weider’s’ wives, Victoria Justice is fine, if unexceptional as Joe’s first wife, Kathy, but Julianne Hough is downright camp-tastic as his second spouse and right-hand woman, pin-up model Betty Brosmer.

None of these characters feel like they inhabit the same motion picture, and Gallo’s direction is practically nonexistent. He lets his actors run rampant over the material in the most unsubtle ways possible, which is a decision I have mixed feelings about. Most of the actors that have been hired for Bigger aren’t capable of forging such daring performative paths without proper guidance, but I can’t blame them for going into business for themselves when the dialogue they’ve been given is so laughably tone deaf and atrocious and on-the-nose. 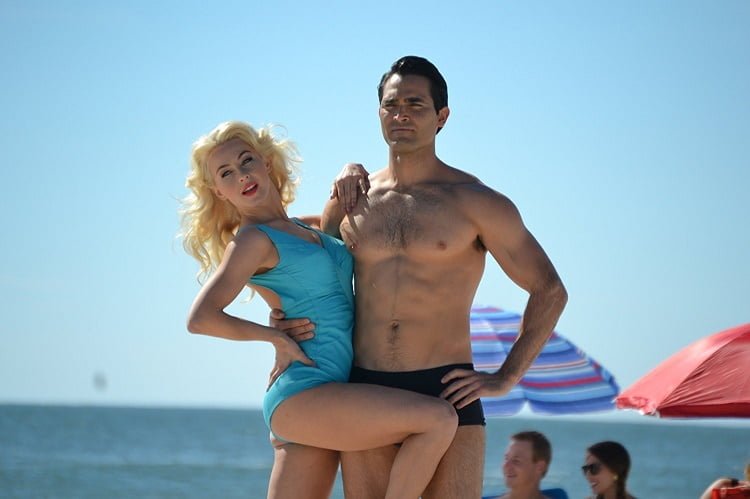 Gallo, who I’ll remind you again was responsible for one of the best action comedies ever written, isn’t the only person to blame. It took a team of four well regarded writers to come up with a film where everyone feels like they’re overemoting lines that were written for a public service announcement. Gallo is joined in writing one of the year’s most baffling scripts by Andy Weiss (White Boy Rick), Brad Furman (The Lincoln Lawyer, Runner Runner), and Ellen Furman. Between the four of them, not a one has been able to shape Bigger into anything remotely usable or interesting, and a tone and pace never gets settled on.

Bigger markets itself as a story about Joe and Ben together, but really it’s just all about Joe. We barely learn anything about Ben, which is a shame since Barnard is the best thing in the film by far. Barnard takes Ben’s soft spoken demeanour and seemingly bottomless intelligence and crafts a singular performance of great subtlety and grace in a film that wouldn’t know either characteristic if it were handed a blank canvas. Every time Bigger starts flying off the rails, one wishes they could see what Ben was up to in that moment. It might not have been as openly melodramatic or historically significant, but it would  hopefully be a lot less groan inducing than what ultimately made it to the screen.

Then there’s the matter of Hoechlin’s leading performance, which is simultaneously better and worse than Bigger deserves. Leaning heavily into Joe’s thick accent, speech impediment, and twitchy shyness during the first half of the film, Hoechlin’s work initially seems misguided and overthought. It’s the same kind of jarring impersonation work that was attempted by Natalie Portman in Jackie or Joseph Gordon-Levitt in Snowden or The Walk. Hoechlin is all in on making sure he can make his take on Joe Weider sounds and looks (thanks to his previous athletic background) like the real deal. It’s a tough performance to like from the outset because of how showy it is and how unevenly the film has been built around it, but as Weider ages, Hoechlin’s posture and cadence smooths out and changes. It’s a wonderful touch that finally shows in the films second half that the actor was building to something a bit more rounded and robust. Outside of a hilariously unfortunate moment where Joe grows a bushy moustache and dons a gray suit – looking like a dead ringer for Borat – Hoechlin’s detailed work becomes more commendable as the story progresses.

But it doesn’t matter how hard Hoechlin is trying when every other inch of Bigger looks and sounds so patently fake. A great performance in a movie where everyone speaks like they’re reading out of a history book and comic book at the same time feels sticks out like a sore thumb. The movie and Gallo’s compromised direction and story end up making the actor’s performance look worse that it actually is.

It’s frustrating, since Hoechlin and Gallo display such a clear and passionate investment in their work. The Weider brothers are massive figures in the fitness world. Their magazines legitimized bodybuilding as a real sport. Their creation of the Mr. Olympia competition changed the sport itself forever. Joe and Ben founded the first sports nutrition company. They were the only people who were trying their best to make everyday people care about their health and fitness. They could have a fascinating biopic made about them. Bigger emphatically isn’t it.

Bigger opens at Cineplex Yonge and Dundas in Toronto, International Village in Vancouver, and Cineplex Forum in Montreal on Friday, October 12, 2018.

Check out the trailer for Bigger: