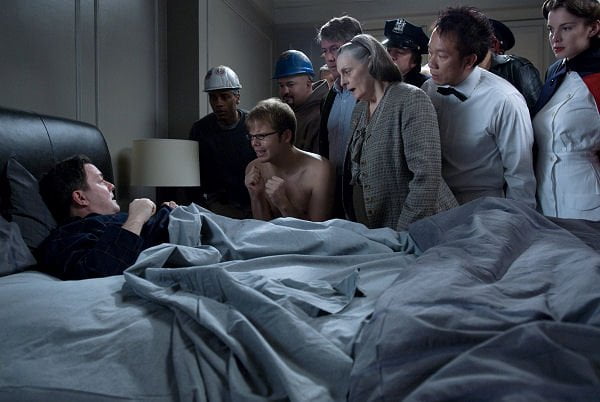 With the studios taking a break for the holidays, we take a peek ahead this week at some of the DVDs coming out before the year’s end. There’s the horror parody Baghead, Ghost Town starring Ricky Gervais, and the popcorn-brained actioner Eagle Eye starring Shia LaBeouf and Michelle Monaghan. Plus, we look at two releases you may have missed recently: the original classic, The Day The Earth Stood Still, and Orson Welles‘ Touch of Evil.

Baghead (December 27)
In this sometimes comic and always clever film, brothers Jay and Mark Duplass take a look at the life of aspiring actors, while giving some gentle ribbing to the world of filmmaking.

Ross Partridge stars as Matt, an actor who decides that he and his friends, played by Elise Muller, Greta Gerwig, and Steve Zissis, need to come up with a great film idea to kick start their careers. Retreating to a secluded cottage, the foursome brainstorm ideas, but what are they supposed to do when their idea about a lunatic wearing a bag over his head starts to become reality?

The film is genuinely fun, with endearing performances by all four of the leads, and fantastic chemistry across the board. The jokey bits are also clever, and mock movie conventions as a whole, avoiding the stupidity of simple parody. The result is a story that feels natural, while still being funny. It’s a combination not seen often enough, and has left me hoping for much more from the Duplass brothers.

Ghost Town (December 30)
British comedian Ricky Gervais stars in this off-kilter comedy as Bertram, a rude, disrespectful man who nearly dies, but it amazingly resuscitated. Bretram’s troubles only get worse as he discovers the near-death experience has given him the ability, or curse, to see ghosts lurking everywhere in his town.

Despite how it may sound, some of the top critics gave the film good grades. Critic Emanuel Levy called it “A charming date film for adults.” Levy goes on to praise director David Koepp who “makes a quantum leap forward as helmer of a whimsically supernatural romantic fable that borrows elements from Blithe Spirit, Topper, Heaven Can Wait, and Ghost yet impresses as a work with its own quirky sensibility.”

Eagle Eye
Newly minted A-listers Shia LaBeouf and Michelle Monaghan star as Jerry and Rachel, two strangers thrown together when an unknown woman calls. The caller threatens them, and uses technology to force them through ever more difficult situations. With the police hot on their tails, the question quickly gets asked, what is really going on here?

With dozes of bad reviews, Eagle Eye is one of the more poorly reviewed films of 2008, but it’s really the only major actioner coming to DVD before year end. In my book, there’s nothing wrong with a good popcorn flick, but I draw the line when the film looks absolutely ridiculous.

As Roger Ebert of the Chicago Sun-Times put it in his theatrical review, “The word ‘preposterous’ is too moderate to describe Eagle Eye.”

Michael Rennie is Klaatu, an alien representative that comes to Earth with a message for every nation: stop the pointless wars or face the consequences. With the robot Gort by his side, played by Lock Martin, Klaatu tries to make the leaders of the world come together, but without any success, so he decides to go into hiding among regular people where he meets Helen (Patricia Neal), and her son Bobby (Billy Gray). It is through these two people that Klaatu truly sees humanity for its strengths and weaknesses.

Included on the new special edition DVD are two commentary tracks, numerous featurettes, a reading of the original short story, and a short documentary. All told, a fantastic package for this remarkable film.

Touch of Evil (1958)
Celebrating the 50th anniversary of the film, Universal films debuts a special release of Orson Welles’ Touch of Evil, featuring three versions of the film. Included in the collection is the original theatrical version, a re-edited release based on Welles’ studio memos, and a preview version from 1976 that includes some of Welles’ changes.

Welles wrote, starred, and directed this classic noir film about a cross-border turf war between a U.S. police captain (Welles), and a Mexican drug cartel. Charlton Heston stars as Mike Vargas, a Mexican detective who also represents the United Nations. While he is already working on the case involving the Grandis, the family behind the drugs, Mike finds himself pursuing a case involving a car that is bombed on American soil, after it left Mexico.