Bohemian Rhapsody, an aggressive, aggrandizing, and more than a little silly and factually fluid look at the life and times of Queen frontman Freddie Mercury, will appeal primarily to those who see the likes of Rock of Ages, Bat Out of Hell, or the band’s own We Will Rock You as the artistic height of musical theatre. Barely paying genuine reverence to its inspiration by focusing more on a showy leading performance than any semblance of humanity, playing all the hits in tossed off, shoehorned, illogical, bombastic fashion, and seemingly devised to soullessly and cynically sell a band’s back catalogue, Bohemian Rhapsody won’t give anyone anything they can’t already get from staying home and falling down a rabbit hole of Queen’s music videos for two and a quarter hours. If you want anything resembling a serious, dramatic, in depth, or exploratory look at one of rock and roll’s most iconic singers, you’d do best to steer as far away from Bohemian Rhapsody. If all you want are a bunch of set pieces strung together loosely along a heavily reimagined timeline or an injection of dopamine with the world’s largest, most unsubtle needle, you’re exactly the audience for this. If Queen sold out arenas, stadiums, and amphitheatres around the globe, Bohemian Rhapsody is the Knott’s Berry Farm performing cover band equivalent of the same experience.

Using the multi-platinum selling band’s seminal performance at 1985’s Live Aid concert as a framing device, Bohemian Rhapsody is a look at a king of rock and roll claiming his throne. Born into an Zoroastrian African-British family and spending his early adult years working as a baggage handler at London’s Heathrow Airport, Farrokh Bulsara (Rami Malek) would find a way to put his untapped charisma, flamboyance, and singing chops to great use after approaching guitarist Brian May (Gwilym Lee) and drummer Roger Taylor (Ben Hardy) and offering to provide vocals for their then imploding band. The band would add bassist John Deacon (Joe Mazzello), Farrokh would rechristen himself as Freddie Mercury, and they’d become Queen, a steadily rising and sonically unique band that mashed-up various genres and boasted one of the most versatile and mercurial vocalists in history. As with most tales of meteoric rises to stardom, Queen’s road to success was rife with ups, downs, in fights, and record label squabbles, with most of the drama revolving around Mercury’s tempestuous, hard partying, and uncompromising nature. They’d create some of the most iconic hits of the 1970s and 80s, but Mercury’s rising star and some nasty external influences would continue to hamper the band’s success and happiness as a unit.

If you’ve ever seen a rock and roll biopic in your life, and even if you know nothing at all about Mercury or his off-stage life, precisely nothing that happens in Bohemian Rhapsody will take you by surprise. The latest film from embattled filmmaker Bryan Singer (who [1] was never actually a good director and more someone who lucked into exceptional material several times and [2] was replaced by an uncredited Dexter Fletcher for the final weeks of production while the director addressed sexual assault allegations) is as boilerplate of a production as one is likely to find. The script from Anthony McCarten (Darkest Hour, The Theory of Everything) never met a biopic cliche that it didn’t like, chock full of dialogue read to read like poster taglines and trailer bait and not like actual conversations between flesh and blood human beings.

I suppose those cliches and cringe inducing moments of cheesiness serve some purpose, however, since Singer’s direction (however much of it is actually his) boasts no personality whatsoever. Bohemian Rhapsody looks every bit like a rudderless ship; a film that’s been kept as safe and non-confrontational as possible for a variety of reasons. It’s produced with the participation of the band’s surviving members, who can’t look bad or else the production won’t be allowed to use any of Queen’s most iconic hits. If the film talks about Mercury’s sexuality and status as a queer icon more than it has to, it would turn off conservative middle Americans and possibly even invite them to talk about the accusations brought against the film’s director. By that same token, it can’t risk making Mercury look like anything less than a misunderstood, sympathetic genius, and even the moments where Freddie does sometimes unconscionable things to those around him have to be handled like the defusing of land mines.

Any dark moments are tempered with a condescending smile and slavish devotion to formula. Any weighty material is ground to a mushy pulp in favour of a film that’s closer to the types of biopics the savagely underrated comedy Walk Hard: The Dewey Cox Story hilariously skewered. Bohemian Rhapsody is the type of film that’s not beneath staging ludicrous, one sided arguments that take place in the pouring rain between characters that never look at each other, trotting out a dying young man to sit in a hallway looking concerned, shots of disapproving fathers and quietly supportive mothers, or suggesting that everything that Mercury touched wouldn’t have been anything if he hadn’t been there to anoint it with his greatness (especially the assertion late in the film that Live Aid made almost no money before Queen took the stage). There are more than a handful of scenes where Freddie has to put up with negative feedback from various record executives (including Mike Myers, literally here for an extended, laboured, painfully corny, and pointless Wayne’s World joke) and other band members who don’t understand his genius, all of them performed by actors who might as well be sporting monocles to pop. Any criticism of the band is summed up via a text dump where quotes from bad reviews of the band’s A Night at the Opera pop up on screen, holding for a hilariously long time on the words “perfectly adequate,” which feels like the filmmakers acknowledging their own flop sweat. 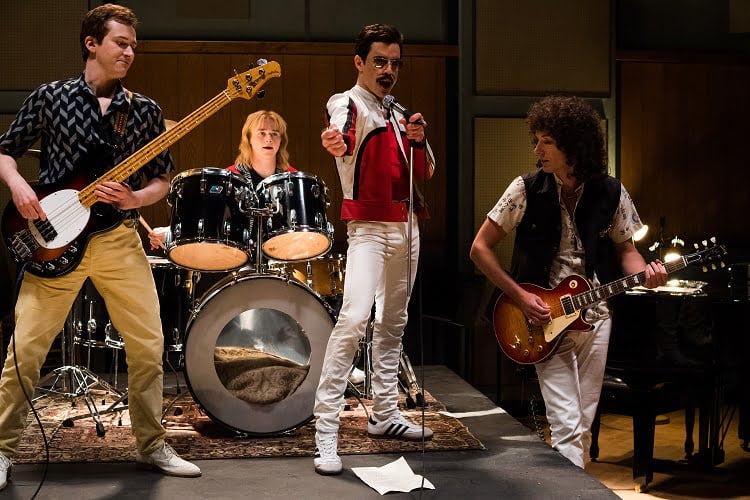 Bohemian Rhapsody also goes curiously out of its way to paint Mercury as the most quietly hetero queer man to ever live, and it feels needlessly gross and contrived. Mercury’s gay experiences are summed up in a handful of throwaway moments: some chaste kissing, Freddie looking longingly at a bear type entering a truck stop washroom, a montage of dudes at a leather bar, and some hand holding. At one point when Freddie attempts to come out of the closet to his wife, Mary Austin (Lucy Boynton, given one of the most thankless roles of this kind in recent memory), as bisexual, she abruptly cuts him off and tells him point blank that he’s gay. For the remainder of the film, Freddie shacks up with his treacherous, Svengali-like handler (Allen Leech), while pining for the wife he left behind. I have no idea what Bohemian Rhapsody is trying to say about Mercury’s sexuality, and quite frankly I don’t think anyone involved cares about such a massive part of the singer’s enduring cultural relevance. It seems to be there simply because people would’ve complained if it wasn’t, and because Mercury’s story needed an obvious villain.

To take Bohemian Rhapsody at face value is to suggest that Mercury’s identity and genius came out of nowhere fully formed and ready to go, and this extends to how the film depicts all of Queen’s greatest hits. At one point, Lee’s Brian May (who’s spot on casting for the part) says that explaining something’s true meaning eliminates any sense of mystery. It’s bad enough that the film applies this axiom to almost all of Mercury’s life, but it’s even worse when it comes to talking about the songs he sang on. Absolutely nothing is made of the emotional meaning of anything, and there’s no talk whatsoever about the songwriting process. If one were to believe Bohemian Rhapsody, all of their hits seem to have been lucky accidents that came about as a result of goofing around in the studio or taking a break from their increasingly contentious arguments, and all of their lyrics materialized out of thin air. Everything that happens in Bohemian Rhapsody exists in a vacuum and almost devoid of enough context for it to make a lick of sense. I understand the mentality behind the old adage “don’t bore us, get to the chorus,” but nearly two and a half hours of something that’s all chorus is annoying and off putting to anyone who wants to see an actual motion picture that will make them feel anything beyond basic toe tapping nostalgia.

Then there’s the matter of Malek’s leading performance, and not only am I unconvinced by the talented actors clearly nuanced work, but I don’t think that anyone could’ve made this material work in the first place. There’s only so much that Malek can add to this script in terms of character beats without going off the rigidly designed book. It’s almost as thankless of a part as everyone else’s here. Malek (whose singing voice here is a mash-up of Mercury, noted YouTuber Marc Martel, and the actor’s take on the songs, none of them sung live and all lip synched) nails the swagger and confidence of the singer, and he’s certainly leaning a bit too heavily on the character’s prosthetic overbite and extra teeth, but there’s not much he can do to make the material feel anything less than basic. He’s certainly trying as hard as he can, but sometimes those efforts lapse into cartoonish theatricality, and not the kind that’s in line with what people often saw in Freddie Mercury. Bohemian Rhapsody is so obsessed with Mercury’s iconic appearance and forcefulness that it forgets to add anything else for Malek to work with. The film gets out of the way of Malek’s performance, but it never gives him anything back. It’s a film and a performance obsessed with iconography and appearance and an overall work that doesn’t care in the slightest about personality or empathy.

Still, Malek remains compulsively watchable, the songs are admittedly as great as they ever were, and the climactic recreation of Queen’s Live Aid set is impeccably crafted. If you just want to listen to the hits and not be bothered to think about the lives of the people who created them too strenuously, Bohemian Rhapsody will clear a very low and shallow bar. If you want it all, and you want it now, you won’t find it here. At any rate, you’d be better off staying home and dusting off some old records instead.

Check out the trailer for Bohemian Rhapsody:

The casting was great and the insight was passable and safe (but cliche as hell, yeah). Too bad the script was awful and had no meat to it and the direction was awkward as hell.